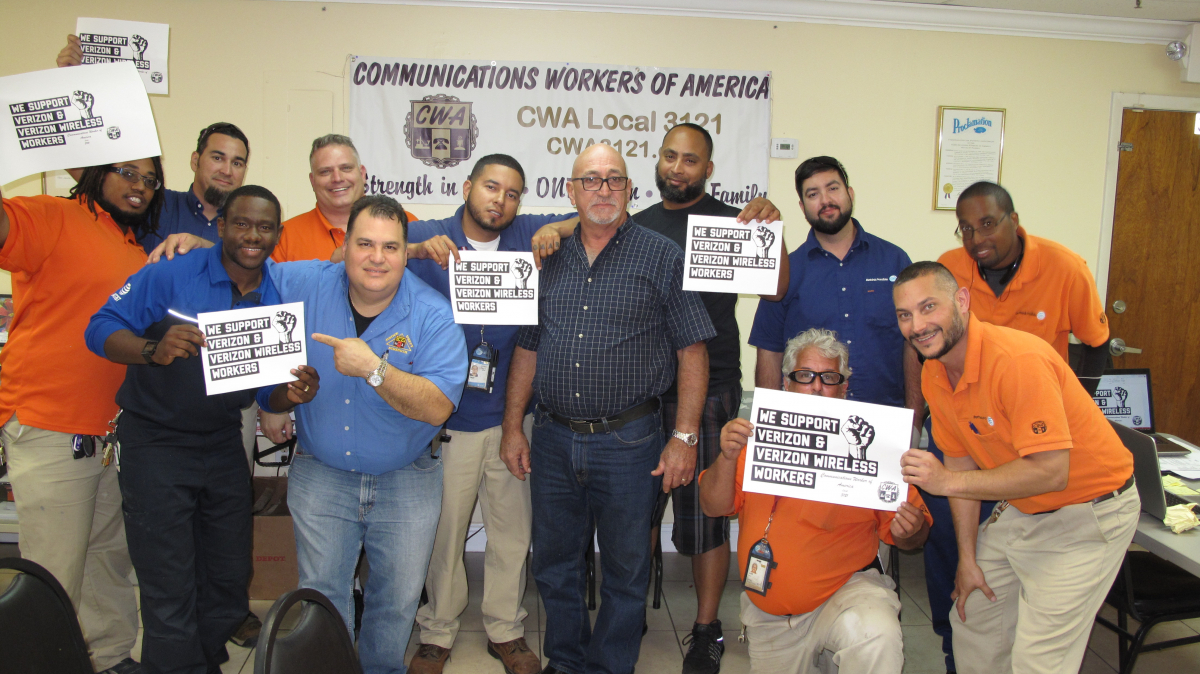 Telecom union locals across the country are stepping up to show solidarity with the strike at Verizon and Verizon Wireless. Photo: CWA Local 3121.

The Communications Workers are working with Jobs with Justice to get local unions and community groups across the country to “Adopt-a-Store”—meaning they would agree to picket and leaflet outside Verizon Wireless corporate stores at least twice a week for two to three hours.

But a few CWA locals didn’t wait for a lead from their District or the national to get going.

“We still believe in the old adage that an injury to one is an injury to all,” said Dave Ratcliff, secretary-treasurer of Local 6012 in Tulsa, Oklahoma, which picketed a Verizon Wireless store on the afternoon of Saturday, April 23. “We saw our union brothers and sisters in the Northeast struggling and we wanted to let them and Verizon know that they’re not alone.”

Thirty people showed up to the picket—including members of the Northeastern Oklahoma Labor Council, along with Transport Workers Local 514 members who work as mechanics at American Airlines.

The picket targeted the busiest store in the area. “It drove the store manager crazy with us being there—I don’t think they expected us to show up at all,” said Chad Barnhill, president of Local 6012, whose members work primarily at AT&T and AT&T Mobility.

The local ABC and NBC affiliates in Tulsa both kicked off their six o’clock newscasts with coverage of the pickets. (See a clip here.)

How You Can Support the Strike

Join an Active Picket
Go to www.standuptoverizon.com or call your Local CWA or IBEW union office to check which Verizon Wireless stores have an active picket line and when.

If you're joining or organizing pickets, take pictures, and e-mail them to StandUpToVerizon[at]CWA-Union[dot]org.

Other Ideas?
E-mail other ideas for strike solidarity to dan[at]labornotes[dot]org.

The first picket, outside a Wireless store in South Bend, was organized by shop stewards Nick Fullmer and Brett Sloop. Both attended the 2016 Labor Notes Conference at the beginning of April, where they networked with other telecom union activists, including leaders of some of the locals now on strike.

“Coming back [from the Conference], we had a feeling it wouldn’t be long before those guys went out,” said Fullmer.

Over breakfast at the Conference, he and Sloop swapped info with CWA Local 1102 members from Staten Island, New York, including the local’s president. Thanks to that connection, “[we were] able to send him pictures and a personal letter saying Local 4900 has your back, we’re standing behind you guys,” said Fullmer. “[He replied] to say they’re looking forward to repaying us in the future.”

Both Fullmer and Sloop are AT&T Premise Technicians, meaning they install and repair U-Verse services (the AT&T equivalent of Verizon FiOS)—and now DirecTV, too.

They see echoes of what’s happening at AT&T in the Verizon battle. “Whether it’s Verizon or it’s us, or any of the companies out there,” said Fullmer, “it seems to be the same struggle we’re going through—more work, less pay; reducing headcount; reducing benefits and increasing healthcare costs; cutting or eliminating pensions.”

Sloop said many techs are worried that AT&T might cut back on their construction workforce, which builds and maintains the fiber lines and infrastructure. “There’s work to be put out there, there’s customers to be had,” he said. “And the companies, they don’t want to spend that money for the infrastructure. They don’t want to make that investment.”

Fullmer said hearing about the severe discipline that Verizon has been dishing out to long-term workers “was really an eye-opener. We have our issues at AT&T,” he said, “but I can’t imagine having to go to work every day in that environment. And that’s another reason why we want to support Verizon workers—they shouldn’t have it that bad.”

Read More on the Strike

For previous Labor Notes coverage on the strike, see:

"Good Jobs on the Line in Verizon Rematch," August 2015 issue.

Unlike Verizon, AT&T is still hiring—both for Premise Tech and call center jobs. Still, the union is fighting for job security.

“I believe that we’re all in the same struggle—I think it’s consistent from bargaining table to bargaining table,” said Ratcliff. “Constantly the companies are outsourcing, and contracting out what work they can. They’re constantly looking for ways to improve their bottom line as opposed to ways to be a better corporate citizen.”

CWA Local 3808 in Nashville, Tennessee, will picket the Verizon Wireless store in Green Hills—the wealthiest part of the city—on Friday, April 29. The organizer there, Darlene Stone, is a former CWA Local 1400 member from Vermont, who was forced into early retirement in 2009 after Verizon sold off a chunk of its New England operations to Fairpoint, which soon found itself on the verge of bankruptcy.

Stone said that in addition to AT&T workers and members of the Tennessee AFL-CIO, she expects T-Mobile call center workers to join the picket. These workers are members of T-Mobile Workers United (TU), CWA’s national organizing effort at the wireless giant.

Local 6012, meanwhile, is hoping to hit all six Verizon Wireless stores in the Tulsa area.

And on April 29, Local 4900 will be back out in front of a Verizon Wireless corporate store in South Bend. The local is also planning more pickets throughout Indiana next week.

How’d They Make the News?

How’d Local 6012’s picket become the top story on the evening news? Ratcliff and Barnhill said they made sure to send press releases to local news outlets a few days before the action.

“We’ve just built relationships with these people over the years,” said Ratcliff, “so they reach out to us when stuff’s going on.”

Patience is key. “I remember 15 years ago, doing mobilization,” Ratcliff said, “I’d communicate with [all the local press] and we’d get no media.” But they never gave up. “We try to reach out to them real consistently. It starts out with things like this.”

The local has shared pictures of the pickets with members across the state via the Local 4900 app, which a majority of the membership has downloaded. “It’s not always easy to get information between different areas,” said Sloop, “and that app has been a tool to do that.”

Sloop said he also sent pictures of the pickets to other CWA locals around the Midwest, hoping to encourage them to organize their own.

In addition to showing support with the Verizon strike, Local 4900’s Sloop hopes that these solidarity efforts can build a stronger network of local unions. At their second South Bend picket, they were joined by members of the National Association of Letter Carriers, IUE-CWA Local 84809 members from Steel Warehouse, a local steel plant, and Jobs with Justice activists.

“Whether you’re CWA, the Letter Carriers, the Steel Warehouse workers, the airlines—you’re only as strong as your weakest link,” said Sloop. “We want everybody to see that.”

"PREPARED FOR THE LONG HAUL"

Verizon presented what it termed its “last, best, and final offer” to the unions at the bargaining table on Thursday, April 28—their first bargaining session since the strike’s start.

CWA District 1 termed the company’s offer “little more than the “same old bullshit.’” According to the union’s bargaining report, while Verizon backed away from part of its proposal to be able to transfer workers anywhere in the foot print for up to two months at a time, they refused to budge on language around closing call centers, which would lead to jobs moving offshore, and refused to return any contracted out plant work to the bargaining unit. Further, the District says, “there is still not one word about improving the wages, benefits and working conditions of Verizon Wireless retail store employees or a fair contract for the VZW techs.”

Verizon has announced that it will cut off striking workers’ health insurance as of May 1.

Morale on the picket lines remains high. “We’ve all been here so long that we understand much more what’s at stake,” said Greg Calabrese, a cable maintenance technician and member of Local 1109 in Brooklyn. This is his fifth strike in his 19 years with the company.

The last Verizon strike ended after two weeks without a settlement, and it took another 10 months for the union to get a deal. This time, said Calabrese, “nobody wants to go back without a contract. Everybody knows what we’re facing and are prepared for the long haul.”

Calabrese joined an early morning picket outside a Brooklyn Marriott, which succeeded in getting the manager to kick out several scabs who were staying there. Local 1101 in Manhattan and Local 1102 on Staten Island have also successfully given scabs the boot with early morning wake-up calls at local hotels over the past week.

IBEW and CWA locals in New Jersey held several mass rallies this week, including one in front of the statehouse in Trenton. Danny Nunez, a facilities technician and member of IBEW Local 827 who’s spent 29 years with the company, said, “It’s like night and day from the time I started. There’s just no respect for us anymore.”

“They really push us like machines—if they could hire robots they would,” said Tom Boylan, another Local 827 member who’s been a lineman for 27 years. “Now our bathroom breaks are watched and timed. Supervisors used to be former techs who knew the job. Now, they have no idea.”

“It’s hard to believe,” said Nunez, “that a company that makes so much money is always trying to nickel and dime us like this.”

“I’ll stay out for as long as it takes, and I’ll never cross a picket,” said Boylan.

Next week, in addition to manning the picket lines, CWA and IBEW activists will head to the Verizon shareholders’ meeting in Albuquerque, New Mexico. A YouGov survey found that public perception of the company is at its lowest point in three years, when news emerged that Verizon was sharing millions of records with the National Security Agency.

Meghan Brophy contributed to reporting for this story.

Dan DiMaggio is assistant editor of Labor Notes.dan@labornotes.org
Related
Could We See a Rail Strike? »
This Year's Biggest Strike Is by 48,000 Academic Workers at the University of California »
Southern Service Workers Launch a New Union »
'Above All, Don't Stay Quiet': Philly Immigrant Workers Organize to Change the Restaurant Industry »
Strike Wave Rocks Britain, as Unions Confront the Cost-of-Living Crisis »