Seven Steps to Opening Up Bargaining 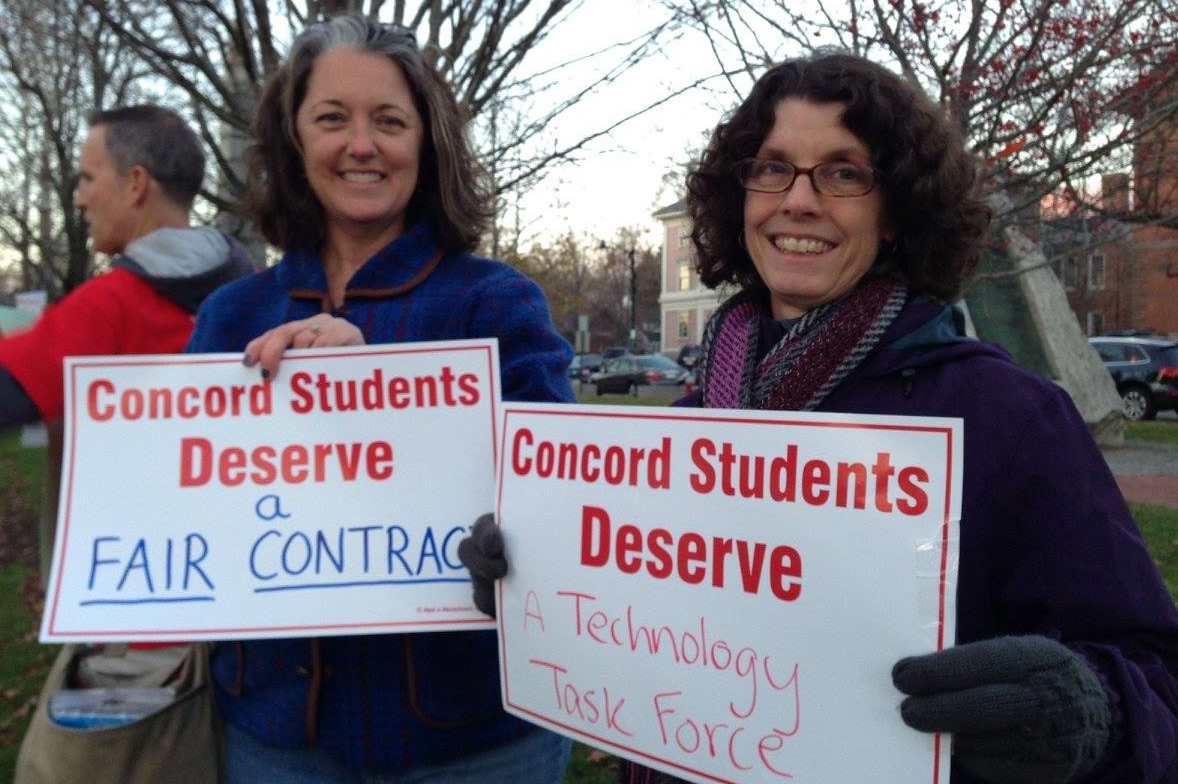 "We’re seeing greater participation in the union than ever before." A transparent contract campaign is breathing new life into this teachers union local. Photo: Concord Teachers Association

In my local, the Concord Teachers Association, member participation is at its peak—thanks to our experience with Open Bargaining. It’s helping us bring our union back to life, change the balance of power, and build hope for our future.

When I say Open Bargaining, I don’t just mean inviting members and the public into negotiating sessions, although that’s part of it.

I’m talking about a transparent approach to the contract campaign, so the union’s legitimacy comes from members participating every step of the way.

Here’s how we did it:

1. Find out what matters to every member.

We started our contract campaign five months before the contract expired, with an electronic survey and conversations, both one-on-one and in small groups.

We talked about joy in our work—something we learned from the teachers union in Portland, Oregon. We spend so much time talking about what’s wrong. It’s hard for people to do that constantly.

Rather than a problem, we wanted to start with a vision. We asked members three questions:

These conversations were transformational. They brought us back to why we got into teaching. Members also began to see the union in a different light—as the only group that was talking about a vision for kids. People got excited to be part of the contract campaign.

2. Develop and ratify a platform for the schools we all deserve.

In our survey and conversations, teachers told us they wanted more time for reflection and collaboration, more control over curriculum and assessment, more power over how federal mandates are applied locally, and to be recognized as the experts they are.

Using all this information, our bargaining team developed a platform with three parts: Time for Teaching and Learning, Professional Dignity, and Equity. Members ratified it unanimously.

From this we developed contract proposals. For instance, under Time for Teaching and Learning, we’re proposing a task force to study and reduce the time spent on testing.

3. Use a communication loop to keep members informed and get feedback.

To prepare for bargaining, we built a communication tree in each building, where one member was responsible for staying in touch with a few others in her grade, house (a team of teachers within a grade), or section of the building.

Every time something important happened, we took it back to the members. Every time we had a bargaining session, we held union meetings in each building within a week and sent out email updates.

Most important, we continued our one-on-one conversations. The morning after a bargaining session, members who had attended would start talking with co-workers about the experience.

How We Got Here

In 2010, our superintendent was committed to busting the bus drivers’ union (also part of the Massachusetts Teachers Association) with a privatization scheme.

Meanwhile, at the elementary school where I teach, a new principal began bullying veteran staff. She let go a popular teacher instead of granting her tenure, and broke up a team of experienced teachers.

She also began targeting me—the union president—for dismissal, giving me “unsatisfactory” evaluation ratings. This sent a chill through the union.

Overnight I had gone from a satisfactory teacher to an unsatisfactory one. It seemed clear to us that it was because of my union activity. If she had gotten away with firing me, no one would have stepped up to replace me as president. It would have taken years for the union to recover.

So we built a movement. We began by holding conversations and trainings with bus drivers, teachers, parents, and community members. Parents were concerned at how the attacks were hurting teacher morale.

Members got more involved in the union than ever before—attending rallies, writing letters to the editor, packing meetings of the School Committee (our school board), and organizing house parties and coffee hours with parents. After three years of struggle, we stopped the bus privatization, the principal left, and we ended the retaliation.

Through this experience, many of us lost our fear. Members got used to taking action and being in constant communication with union leaders. Also, three parents who had grown concerned about what was going on were elected to the School Committee. (Though they have yet to really exert their power, there’s now much more open debate, instead of just rubberstamping the chair’s proposals.)

Then last February, the Massachusetts Teachers Association held a summit to help locals learn open bargaining. Our bargaining committee was inspired. The week after the summit, we hit the ground running.

We have emphasized proposals on “permissible” subjects of bargaining, like control over curriculum and input on the amount of testing. These are subjects that management isn’t legally required to negotiate over—but they’re as important to teachers as mandatory subjects like wages and schedules are.

Fighting hard on these subjects has been crucial for getting members involved in our contract campaign, and for earning community support. When we talked about teachers as the experts who should make curriculum decisions, parents understood and backed us up.

We needed the employer to agree to open up bargaining to all members. So we spent the first two sessions debating ground rules.

The lawyer for the School Committee (Concord’s equivalent of a school board) first tried the diplomatic tack, arguing that the way we’ve negotiated in the past—with a small bargaining committee, and no community members allowed in the room—works well.

When that didn’t persuade us, he used scare tactics, saying they would have to invite members of the Select Board (the town’s governing body) and the Finance Committee (which proposes budget guidelines for the School Committee). With these elected officials in the room, he claimed, the School Committee couldn’t be as generous with its financial package. We didn’t succumb to this either.

We finally won the issue by bringing pressure. For the third session, despite not having the ground rule yet, we went ahead and packed the room with 50 teachers. That showed a new level of seriousness on our side, and proved that our committee had members’ backing. By the end of the day, the School Committee had agreed to open negotiation sessions.

Being a witness at the table is completely different than just getting a report afterwards. Members who witness the process themselves feel more informed—and they get fired up at the disrespect the School Committee shows for teachers. People are upset when they have to miss a session.

We’ve abandoned the practice of having a lead negotiator speak on our behalf. Instead we have two co-chairs who open each meeting. Then each member of our seven-person negotiating committee speaks to a part of the platform and its related proposal.

It’s harder for the superintendent and School Committee to dismiss seven of us, speaking with one voice, than one individual leader.

7. Never have conversations with management away from the table.

Open bargaining means moving away from the habit of relying on individual relationships, and toward relying on collective power.

At one point, the School Committee invited us to talk with them—away from the negotiating table. This led to a difficult internal conversation. Some members of our bargaining committee felt it would be helpful; others felt it would violate our commitment to transparency.

But we’re a strong team, with deep respect for each other. Ultimately we decided to stick to our commitment, and our team came away stronger for it.

We haven’t yet settled our contract, which expired on July 1.

We’re no further along in reaching agreement on what we see as the big issues: academic freedom, input over curriculum and scheduling, and a task force on assessment.

On the other hand, because of what we’ve raised in bargaining, we’ve actually seen changes in management’s behavior in the day-to-day stuff. We’re seeing more positive resolutions of our grievances, and management has backed off an effort to unilaterally impose changes to the evaluation system.

We’ve also been included on technology and scheduling committees to brainstorm changes—though we don’t intend to let those substitute for contract language.

And we’re seeing greater participation in the union than ever before. Now we’re focused on building our external power, by cementing our community ties. Teachers are turning up the heat by:

Merrie Najimy is the president of the Concord Teachers Association.