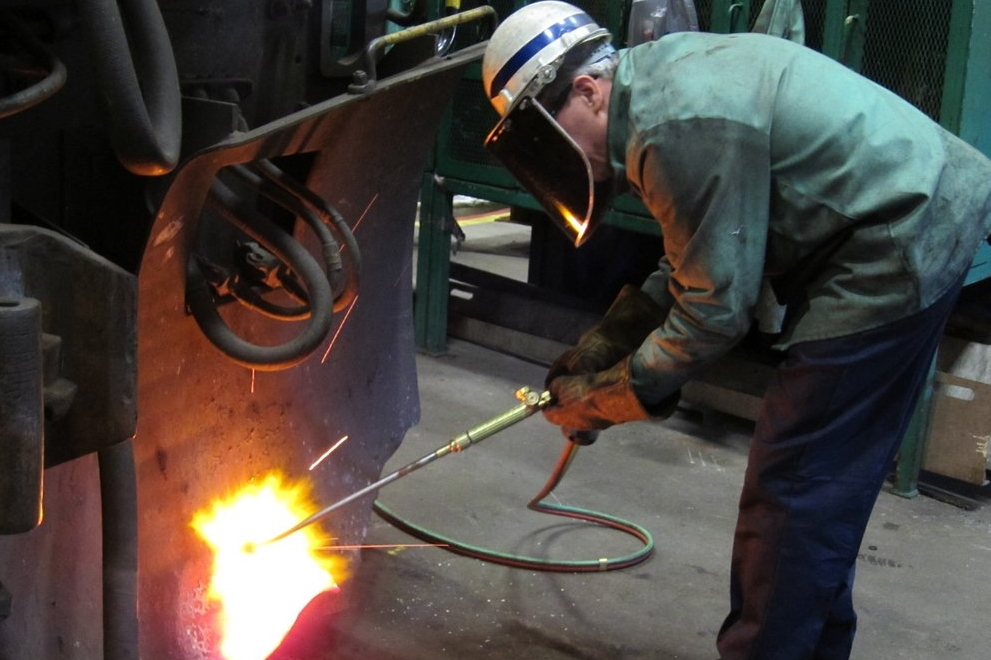 A boilermaker works on a locomotive plow, a part that often gets damaged in operation. Railroad workers recently voted down a concessionary deal that would have blended machinists' and pipefitters' jobs together. Photo: Jon Flanders

Union members have become used to a certain pattern: threats of plant closings and layoffs, followed by a vote to reopen the contract and make concessions to “save jobs.”

In the railroad shops of the CSX corporation, this pattern has been broken.

Last fall CSX made an offer to its machinists and pipefitters—backed by their unions, the Machinists (IAM) and SMART. The tentative agreement would merge the two crafts into a single job, “Master Mechanic.” For instance, the master mechanic would install both power assemblies (previously machinists’ work) and radiators (previously pipefitters’ work).

Management painted the concessionary deal in glowing terms. But in December, workers in both crafts bucked the threat and overwhelmingly voted no.

Nationally there are around 8,000 railroad machinists. They rebuild locomotives from the ground up and do preventative maintenance such as replacing power assemblies, turbos, traction motors, and other mechanical items.

Pipefitters work on the extensive pipe systems on locomotives: air, fuel, and oil.

Collectively, these railroad shop workers maintain the locomotive fleet for all the major railroads in the U.S.

The critical role they play got front-page attention after a defective locomotive led to a 2013 disaster in the town of Lac Mégantic, Quebec. A runaway train carrying crude oil exploded, killing 47 people.

Needless to say, the affected workers saw things a little differently. It looked to them like more work for the same pay.

Machinists and pipefitters would have to learn each other’s jobs. Previously, if a job called for both piping and mechanical, the two crafts might have worked together on a team. Now the whole job might be done by whoever was at hand—leading to job losses all around.

CSX was promising to guarantee jobs for two years, but not many thought the guarantee would last much longer.

The agreement would have given up not only traditional job jurisdictions, but also seniority and employee-protection agreements, where laid-off machinists are paid a percentage of their wages for a period of time based on years of service.

Layoffs are a particular concern for these workers—who might otherwise be forced to move rather than spend time looking for another job near home.

Next CSX closed the 100-year-old Corbin locomotive shop in Kentucky and the Erwin railyard in Tennessee, citing the decline in coal shipments.

Many machinists and pipefitters lost jobs in these shops. Layoffs of other crafts, such as the boilermakers, followed. Obviously management hoped this would bring pressure to bear.

In reality, despite the decline in coal shipments, CSX has yet to go in the red. Last summer, while it was negotiating the concessions, the company announced its profits had risen 4.5 percent in the second quarter and it had beaten its own expectations for earnings. In the full year 2015, the company made $3.6 billion in operating profit.

As both union leaders and CSX saw the unhappiness grow, they organized a full-court press to convince workers of the need for this change. Company mailings went out urging participation in the contract vote.

At the beginning of December, leaders of the affected local unions attended a meeting at the Machinists’ national labor education center with company officials and national officers of both unions.

To make the tentative agreement seem sweeter, unrelated items were added—for instance, a proposal to change overtime rules, which was actually already in the works.

The negotiations failed, however. Local officers at the meeting still refused to support the slightly revised tentative agreement.

Voting took place at locals; the results were mailed in to district officials and counted in December. The no vote was overwhelming.

The unions only reported that the total result was to reject the tentative agreement—and didn’t mention that the leaderships had campaigned for it or report the vote count in the press release. But the members who organized opposition used Facebook to communicate between shops and keep track of the various local tallies.

In most cases, turnout was close to 100 percent. Only one local of the IAM voted narrowly to support the agreement.

Particularly notable was the no vote at the Corbin IAM, even though the shop there had been closed. Corbin workers retain rights to bid on jobs in other shops—but they opposed seniority provisions that would have given them rights over workers in shops that were still open.

Another big rejection was at the IAM shop in Huntington, West Virginia. This shop had been selected for the trial consolidation of machinists’ and pipefitters’ work. The union and CSX had touted it as a model for the industry, where jobs had been saved.

Machinists who opposed the Master Mechanic agreement are now discussing organizing an opposition slate in the next election for District 19, which includes all IAM machinists in the railroad industry.

Members are frustrated with General Chairman Jeff Doerr, who was “helicoptered in” by the International and has never worked in rail.

There’s also the looming concern that the district could be merged into the Transportation Communications Union (TCU), which merged with the IAM in 2011. The TCU represents railroad clerks and carmen, but so far it hasn’t merged the locals.

While craft union divisions have always been a problem in rail, the work of mechanics is quite different than the largely clerical TCU, amalgamated locals would make little sense, and the IAM has done little to integrate District 19 mechanics with the TCU ahead of any grand merger into a common district.

Jon Flanders is a retired railroad machinist and past president of IAM Local Lodge 1145, which represents Machinists at CSX in upstate New York.

Thanks for the article! But... how did a "defective locomotive" cause the Lac Mégantic disaster??