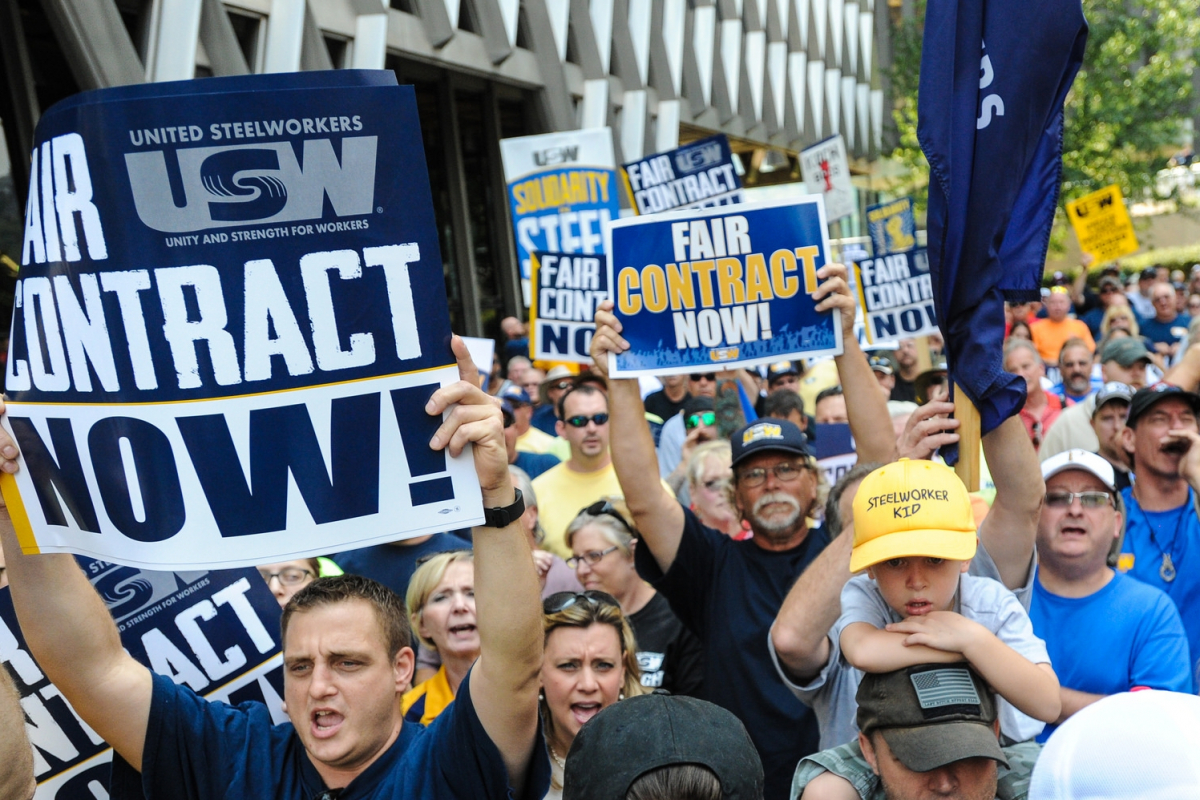 Steelworkers marched for a fair contract in Pittsburgh. Twenty-two hundred workers at Allegheny Technologies have been locked out since August 15. Photo: USW

Twenty-two hundred Steelworkers, locked out since August 15, are refusing demands for major concessions on health care, retiree benefits, and subcontracting.

The lockout at Allegheny Technologies (ATI) could be a bellwether for the industry. Tense negotiations continue for 30,000 steelworkers at ArcelorMittal and U.S. Steel, whose contracts are on rolling extensions.

ATI is a specialty metals company headquartered in Pittsburgh. It has locked out workers in its Flat-Rolled Products division who make steel used in aerospace and defense, oil and gas, chemical processes, and electrical energy generation at 12 locations in Massachusetts, Connecticut, New York, Pennsylvania, Ohio, and Oregon.

Union activists say the number and tenor of ATI’s 144 demands showed that it wasn’t serious about bargaining from the beginning.

“A lot of the things they were asking for were conditions in a non-union shop,” said Marvin Dunklin, former president of Steelworkers Local 7139-05 in Washington, Pennsylvania.

ATI had been planning the lockout for months, using forced overtime to build up a reserve stockpile of products.

“A lot of us feel like we were taken advantage of,” said Alan Braden of Local 1138 in Bagdad, Pennsylvania. “There were crews working 60, 70 hours a week, if not more, to stock these warehouses, to stock this steel.”

Health care is a major issue. ATI’s final offer would for the first time force employees to pay premiums of up to $215 a month, with a $1,000 deductible and a $6,000 out-of-pocket maximum.

Workers with family coverage who hit the maximum would pay $10,000 apiece for a year’s health care.

“They absolutely gutted the health care,” said Josh Hall, president of Local 7150 in Albany, Oregon, where they make titanium and alloys for jet engines and helicopter blades. “It’s almost turning into little more than major medical.”

New employees would be forced onto a “consumer-driven health plan” with even higher costs and worse coverage.

“Some of the things available on the Internet are cheaper than what the company is proposing,” Dunklin said.

Pensions, retiree health benefits, and life insurance would also be eliminated for new employees. Instead, ATI would contribute to a 401(k) and pay workers 50 cents an hour extra to help cover the future cost of their health care.

“After 50 years of fighting, you can’t vote for what they’re asking for,” said Dunklin, “or else you might as well find an entry-level job at Walmart. For the conditions and the skills that are required to do this job, it’s an insult.”

Workers in the mills get years of training to run the machines, and learn to withstand scorching heat. “When you open and close those furnace doors, the materials’ll be coming out of a furnace that’s 2,000 degrees,” Dunklin said.

Meanwhile, the Steelworkers are still in negotiations affecting 30,000 workers at U.S. Steel and ArcelorMittal, two of the biggest steel producers in the U.S.

Contracts covering workers from Minnesota to Alabama expired September 1. The union and company have agreed to rolling 48-hour extensions, meaning the union will give two days’ notice before striking.

Union leaders say the big steelmakers’ proposals are suspiciously similar to those at ATI—concessions on health care, vacation pay, overtime, and subcontracting.

In northwest Indiana at the biggest ArcelorMittal local, workers have put giant X’s on their cars—the symbol for strike, and now a general symbol of solidarity. Members also enjoy the union’s use of the “Bat signal” to project messages on the sides of the mills and corporate offices.

But given the difficult industry climate, a strike seems unlikely.

The domestic industry is being hurt by a global glut of steel. A downturn in the Chinese economy means record Chinese steel exports heading to the U.S. market.

Thousands of workers, most at U.S. Steel, have been temporarily laid off.

The employers are trying to take advantage of a cyclical setback in the steel market, the unions say, to make permanent cuts to workers’ wages, benefits, and working conditions.

“They feel like this is a once-in-a-lifetime opportunity and they want to gouge us,” said Hall.

ATI got millions in tax breaks to build its state-of-the-art, $1.2 billion hot strip mill in Brackenridge, Pennsylvania, in 2014. In exchange, it agreed to preserve jobs at the plant.

“That’s what sparked some outrage locally,” said Dunklin, “when they came to these contract negotiations and they put everybody out on the streets.”

CEO Richard Harshman’s total compensation rose from $4.3 million in 2013 to $8 million in 2014. But the company has taken out ads claiming union workers earn an average of $94,000 a year.

Many report they make far less. Others say their earnings are inflated by tons of forced overtime, the result of the company’s refusal to hire.

“When I came in, the business was booming,” said Braden, who’s been at the Bagdad facility eight years. “Overtime was there if you wanted it. The hiring was big.

“But since then, they want to do more with less people. It’s ‘How much can you squeeze out of an employee?’”

The company has cut back on three-crew eight-hour shift schedules, in favor of two crews on 12-hour shifts.

To keep the plants running, ATI is using replacement employees from a strikebreaking firm. Workers dispute how much work is actually getting done, though.

Dunklin has seen trucks carting unprocessed slabs back out of the plant, which could mean customers are taking their business elsewhere. “It’s over a quarter-million dollars a sheet.”

Dunklin believes hiring Black replacements is in part a company strategy to provoke racist comments from locked-out workers. “I warn guys on the line that you can say a lot of things, but the minute there’s something racial or sexual in nature, there’s a [National Labor Relations] Board charge,” he said.

In all the affected states, workers are allowed to collect unemployment during a lockout for at least six months. When the lockout started, Hall reported, one manager told his local, “We’ll see you in seven months and you’ll sign a contract.”

ATI plans to cut off health insurance for locked-out workers on November 30. An emergency medical program, paid for out of union strike funds will allow members to maintain their insurance.

Steelworkers are out on the picket lines every day. They’ve distributed window signs to sympathetic small businesses and yard signs to neighbors.

Motorcycle rides to all the picket lines have become a tradition. The Steelworkers’ Ride for Justice brought 100 riders from the different mills together in Pittsburgh, where they repeatedly circled company headquarters.

They’ve also held joint actions with members at U.S. Steel and ArcelorMittal. On September 1, the union marched on the corporate offices of all three.

Regina Stinson, whose husband is locked out at the Vandergrift, Pennsylvania, plant, has been organizing other wives. “When there’s meetings,” she said, “I’ll get on the horn and tell the wives to go to the plant to relieve their husbands” on the picket line.

She started making women’s T-shirts and set up a closed group on Facebook.

“This wife would know another wife and invite them,” she said. “Wives see what we’re doing here and they get involved in their area that way.”

Locally, Stinson is helping lead community outreach. “We’ve got a lot of businesses and restaurants that are feeding the guys on the line,” she said. “I was going to open the kitchen up at the union hall, but we haven’t had to yet.”

In return she asks locked-out workers and their friends to patronize these businesses.