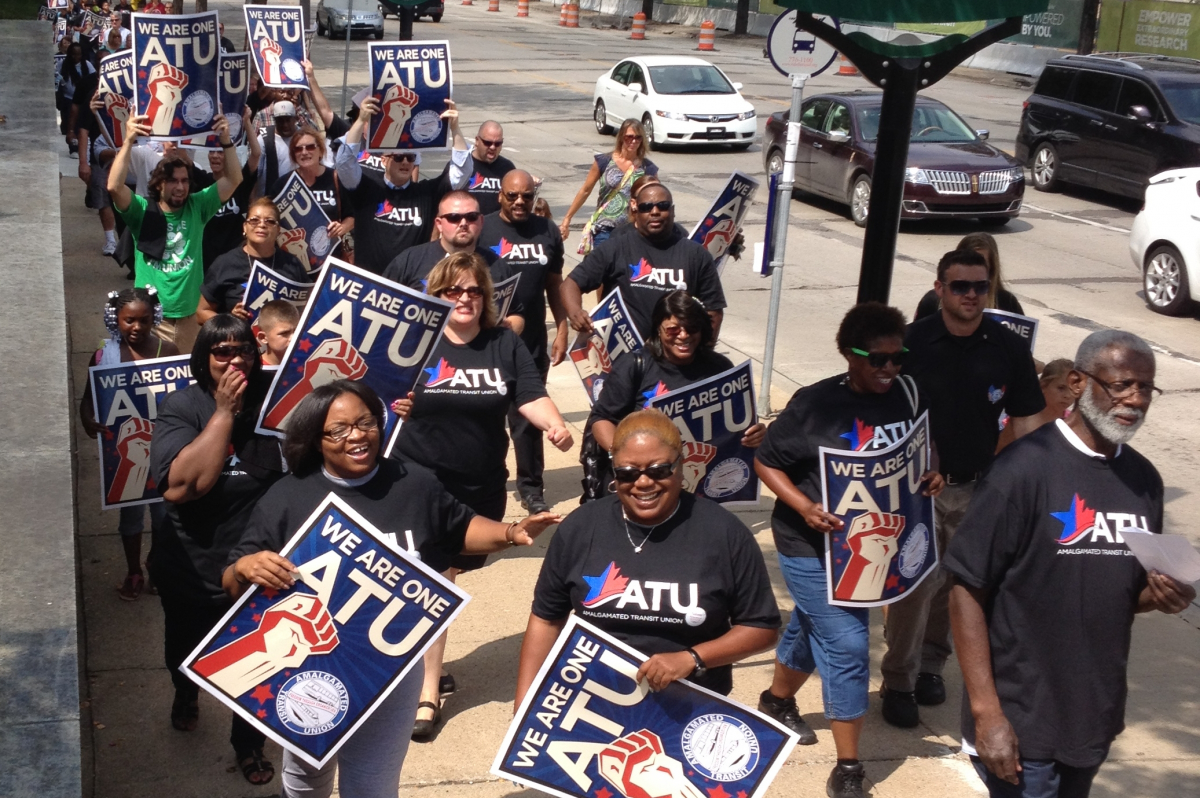 Three hundred members of Amalgamated Transit Union Local 836 in Grand Rapids, Michigan, are locked in a battle to save their pensions. Photo: Todd Brogan

Three hundred members of Amalgamated Transit Union Local 836 in Grand Rapids, Michigan, are locked in a battle to save their pensions.

Their employer, the Interurban Transit Partnership (known as the “Rapid”), wants to replace their pension with a defined contribution plan, a 457—the public sector version of a 401(k).

Linking its pension struggle with the interests of bus riders, the union is also agitating to roll back a 16 percent fare increase—which was implemented at the same time that the agency’s CEO got a $4,000-a-year raise.

The Rapid tried to stop the union from leafleting at the city’s main transit hub, threatening to discipline and even arrest workers. But the union filed a First Amendment lawsuit and won a preliminary injunction in federal court.

The pension attack is “driven more by political ideology than fiscal responsibility,” said Local 836 President RiChard Jackson, who’s been a Rapid bus driver for 16 years. The union says the plan is 80.4 percent funded, and points out that ratings agencies consider 70 percent funding to be adequate.

Local 836 is getting creative. In the midst of ArtPrize, an international art festival in downtown Grand Rapids, it organized a “funeral for the middle class” and teamed up with United Students Against Sweatshops for a flash mob. And in early mornings, the union’s “Rise and Shine Committee” visits the neighborhoods where Rapid board members live. Drivers leaflet and hold signs “to let their neighbors know who they are and what they’re trying to do to break the public services that people rely on,” says Jackson.

Jackson emphasizes that the bus drivers’ pension “is not a very rich plan. At best, if you are there for 30 years, you’re getting $1,100 a month. But you’re talking about a benefit that you get for the rest of your life, versus a 401(k) plan that is geared toward one lump-sum.”

While management claims that pensions are “antiquated,” a union leaflet says the opposite of true. “Adopting defined contribution plans [like 401(k)s or 457s],” it reads, “is a move backward to a time when individual employees assumed all financial risk and the employers they devoted their lives to were let off the hook.”

According to Jackson, 1 in 9 bus drivers nationally do end up retiring early due to disability or medical condition, “but there’s no disability for a defined contribution plan”—you’re stuck with what you have accumulated to that point.

“When you put the pensions of working people at risk,” Senator Bernie Sanders wrote in a letter supporting the workers, “you are making inequality worse, not better. You are making these families and the communities they support weaker, not stronger. That is not the America we want.”