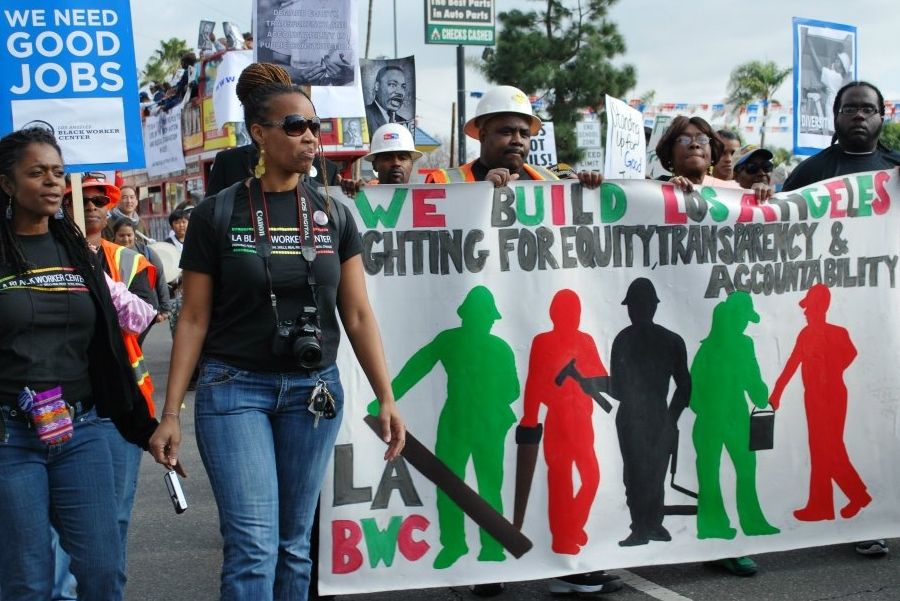 Members of the Los Angeles Black Worker Center are breaking new ground—bridging community and workplace organizing to open up opportunities for good jobs in construction.

Case in point: Patricia Allen. She’d worked in retail before joining Laborers Local 300 as an apprentice in 2008. In 2012 she finished her apprenticeship and became a journeywoman.

Despite the higher wages and greater flexibility, it’s been hard.

“At times I was very discouraged to be out there and not see someone who is female or Black,” she said. “I’d ask, ‘Where we are at?’”

Sometimes she even wanted to quit. “But I hung in there. I felt like if I could get in the door, [I could] open the door for other women, and motivate them to come into the trade.”

Allen is finding her path to transform the industry through the Black Worker Center. Formed in 2010, it’s the first worker center devoted to specifically addressing issues faced by Black workers.

The center wants to open up good jobs in a city where 1 in 3 Black workers holds a low-wage job, and 50 percent are unemployed or underemployed. A new report by two foundations provides in-depth context on the Black jobs crisis and profiles innovative Black worker organizing across the country.

According to #BlackWorkersMatter, a new report from two foundations, Black workers were hit the hardest by the Great Recession—and have recovered at a slower pace than other workers.

But it’s not just about the difficulty of finding a job. Even once hired, Black workers are more likely to earn low wages.

The report found that 38.1 percent of Black workers earn sub-poverty wages, compared to 25.9 percent of white workers. The disparities are even greater for Black women and for young Black workers.

Director Lola Smallwood Cuevas argues the severity of the crisis should be a warning to non-Black workers, too.

“We are the canaries in the mine,” she says. “When you want to see failure in the economy, you just need to drive down Vermont or Crenshaw Boulevard, and you can see the starkest example of what happens when you disinvest in working class communities, when you deregulate, when you de-unionize.”

Leadership training, says Smallwood Cuevas, is at the core of the center’s work:

“How do we build power for workers to be able to shift decision-making over who gets hired, who gets fired, and what working conditions are?”

So, beginning at their orientation, new members discuss the Black jobs crisis and how to fight it.

In the center’s Worker Justice University, members learn how to facilitate meetings, recruit others, and campaign to raise the minimum wage and against wage theft.

It was through his involvement with the worker center that Vincent Loque found his job as a wire technician with Kinkisharyo, which builds light rail cars for the L.A. County Metropolitan Transportation Authority (Metro).

After Electrical Workers (IBEW) Local 11 won a neutrality agreement with his employer, the Black Worker Center introduced Loque to a union organizer.

Soon he was also getting training at the Worker Justice University, which helped him hone his organizing skills during the union drive.

One way the center is trying to tackle the barriers that trap Black workers in low-wage jobs is by focusing on construction.

The center worked with union and community allies to pass a Project Labor Agreement between Metro and the L.A./Orange County Building Trades Council, covering $6 billion worth of projects.

The agreement requires that 40 percent of workers hired onto Metro construction projects—including the new Crenshaw line, which will run through predominantly Black neighborhoods—live in economically disadvantaged areas.

It also requires that 10 percent of all hires must be “disadvantaged workers,” such as single parents, chronically unemployed workers, or those who are homeless, receive public assistance, lack a high school diploma, have been released from the foster care system, or have a criminal record.

The agreement cannot name Black workers, however, because California’s Proposition 209 made it illegal for state or local governments to enact affirmative action programs based on race, sex, color, ethnicity, or national origin.

Contractors must try to hire through unions first, and workers are guaranteed prevailing industry wages. The idea, Smallwood Cuevas says, is that public investment should create jobs for the communities that need them most.

Allen was born and raised in the area. Local hire provisions helped her get on the Crenshaw line project, and she sees a lot of other Black workers being hired too.

“It’s a start,” she said, “to say, ‘We’re here, we matter, why can’t we get quality jobs to support our families and ourselves?’”

The center estimates that Black workers hold 18 percent of the jobs on the Crenshaw line project, a dramatic increase from the industry status quo.

While the worker center itself placed 30 workers in union jobs last year—in a range of industries from construction to hospitality—Smallwood Cuevas says the work must go beyond job placements.

The Black Worker Center teaches members it’s their job to open the door for others. “Your placement is not about you,” says Smallwood Cuevas. “It’s about how do we get the Black workers crisis out of our community.”

The center’s Black Labor Construction Council reinforces this message, and mentors members who are entering the trades.

The council, made up of Black construction union leaders, advises the center. Its chair is Will Scott, a 25-year member of Sheet Metal Local 105 and its current apprenticeship coordinator, who has supported the Black Worker Center since its inception.

Before the BLCC was created, he says, Black leaders from construction unions would run into each other from time to time.

But the council brought them together for the first time to discuss how to address the historical underrepresentation of workers of color—and especially Black workers—in construction unions.

“Very quickly,” Scott said, “you looked around the room and realized we were in a position to really have an impact.”

The BLCC runs a “ready-to-work” program where worker center members learn the skills to pass the entrance tests for the building trades—and also what to expect at work.

“We mentor and train these people from a Black perspective,” says Scott. “You’ve got to be immensely tough—you may be the only Black worker on the job.

“We tell them how important it is to be active in the union, how it’s going to help us build power and have your voice heard,” he said, “and address some of the things you are going to see.”

‘TO ORGANIZE A COMMUNITY’

When Allen attended her first union meeting last month, one of the few other women there approached her about getting more involved.

Allen is up for it. “I can introduce some of the things that we did with Worker Justice University,” she said. “I have a better understanding of how to present things and raise questions.”

As the Black Lives Matter movement sheds light on some of the root causes of inequality and racism, Smallwood Cuevas believes a focus on Black workers can help to connect the dots. “Why are Black youth shot on their block? Why are communities stripped of so much opportunity?”

The L.A. center is supporting Black worker centers’ emergence in other cities. So far four more are up and running. A national convening will take place this November.

Loque will continue to share what he’s learned through the center with young Black workers trying to find good jobs.

“The [center’s] goal isn’t to organize a workforce necessarily,” he says. “It’s to organize a community to be able to organize themselves and recognize how we effect change.”

Sonia Singh is a staff writer and organizer with Labor Notes.sonia@labornotes.org
Related
A Life in Transit: ‘What You Can Get Is Set by How Far You Are Prepared to Go’ »
When Workers Swapped Segregation for Solidarity »
Minneapolis Strikers Demand a Living Wage for the Lowest-Paid Educators »
After Strike, Washington Carpenters Approve New Contract by Slim Margin »
After Voting Down Four Tentative Agreements, Washington Carpenters Strike »