Bosses Must Keep Up Dues Checkoff after Contract Expires, Says Labor Board 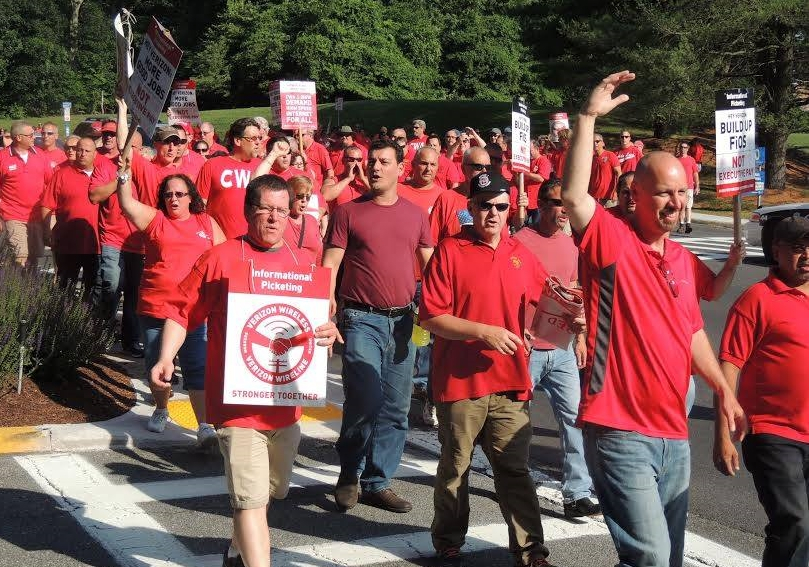 Hundreds of CWA members, who are working without a contract, marched in June on the hotel where negotiations with Verizon were being held. In a landmark decision, the National Labor Relations Board has ruled that dues checkoff must be continued after contract expiration. Photo: Stand Up to Verizon

In a landmark decision called Lincoln Lutheran, the National Labor Relations Board has overruled 53 years of pro-employer precedent. By a 3-2 vote, the Board said that like most other contract terms, dues checkoff must be continued after contract expiration unless the parties agree on a new contract or the employer declares impasse and implements its last best offer.

Dues checkoff must be maintained even if workers are conducting an aggressive inside campaign.

The NLRB ruled in favor of dues checkoff in 2012, but the Supreme Court invalidated the decision, along with many others, when it declared that two Board members had been illegally appointed by President Obama. The matter had to be heard again once new members were properly appointed.

Lincoln Lutheran removes a major impediment to working-without-a-contract campaigns, where the union uses on-the-job actions to pressure an employer for a contract, while avoiding the risks of permanent replacement and decertification associated with a strike.

For tips on working without a contract, check out Robert Schwartz's No Contract, No Peace: A Legal Guide to Contract Campaigns, Strikes, and Lockouts, available for $20 from the Labor Notes store.

Under the old rules, an employer could cease transmitting union dues as soon as the contract expired and the union called its first demonstration or informational picket line. The prospect of losing all its income was a strong disincentive for many unions.

The working-without-a-contract strategy is being pursued right now by the Communications Workers and Electrical Workers (IBEW) in their contract fight with Verizon, and by the CWA in its battle with AT&T in the Southeast (see page 12). The Steelworkers are also working without a contract at Arcelor Mittal and U.S. Steel.

With a no-strike clause no longer around its neck, a union that stays on the job after the contract expires can call short-term warning or grievance strikes to throw the employer and its customers off balance. And the union can time a protracted strike for the moment it will be most damaging.

Moreover, no longer constrained by a management-rights clause, the union can demand bargaining on day-to-day decision making, and can file streams of unfair labor practice charges.

As the Republican dissenters in Lincoln Lutheran ruefully warned, employers are not likely to take this decision lying down. They can be expected to come to future negotiations with artfully designed language insuring that dues checkoff will die with the contract. Sticking to their position, they will include the demand in their final offer, to be implemented after declaring impasse.

Unions will have to find ways to overcome these stratagems—for example, stretching out meetings and filing multiple information requests to prevent the employer from lawfully declaring impasse. Time will tell who will prevail in the long run.

But for now, unions involved in inside campaigns can relish the discomfort employers will undoubtedly experience when sending in their weekly dues checks.

Robert M. Schwartz is a union-side labor lawyer and author.