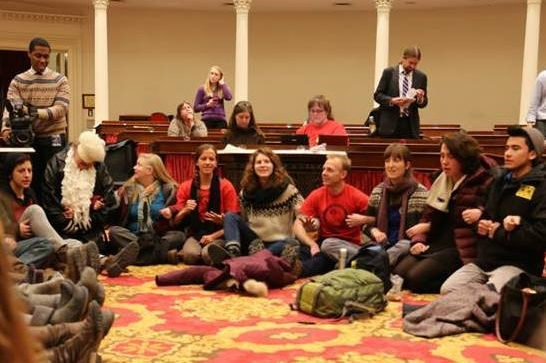 On December 17 he called a press conference and declared that “now is not the time to ask our legislature to take the step of passing a financing plan for Green Mountain Care.”

According to the governor, a multi-millionaire former business owner, the latest projected cost of universal coverage would double the state budget in its first year alone, while requiring onerous new payroll and income taxes.

Act 48, the 2011 law that committed Vermont to a universal, publicly financed health care system, is still on the books.

The Vermont Workers’ Center, which helped mobilize statewide support for passage of Act 48 four years ago, countered the governor’s claims by releasing its own plan for financing the program.

One hundred economists endorsed the VWC approach, which relies on progressive taxation. The VWC also struck back with a clever “whiteboard” video, “The Time is Now: Healthcare Financing for Vermont, Explained in Three Minutes.”

But, of course, neither the quick tutorial nor the VWC’s full report garnered as much media attention—or had the same legislative clout—as Shumlin’s demolition.

Several hundred frustrated health care reform advocates showed up at the governor’s January 8 inauguration in Montpelier—and they weren’t there to applaud. Instead they staged a sit-in at the state capitol, chanting and singing, unfurling banners and refusing to leave.

“People had fought for this a long time,” says Liz Nikazmerad, president of United Electrical Workers Local 203 and a worker in the produce department of a Burlington grocery. “It was a huge win and to have the rug yanked out like that was very upsetting.”

By the end of day, the UE leader and 28 others—now known as “The Statehouse 29”—faced multiple criminal charges, including resisting arrest. The cases against 18 were later dropped; others settled by paying a fine or promising to do community service.

It was first in a series of angry labor sorties to Montpelier. During the legislative session, the bitter recriminations over the governor’s health care retreat morphed into broader controversies about workers’ rights, contract concessions, and what the Vermont Progressive Party calls Shumlin’s “austerity budget.”

But in the face of these assaults, the local labor movement is showing new energy...

Shumlin’s about-face on Green Mountain Care reflected more than revised estimates of its cost and feasibility. Unfortunately, Vermont was forced to create a private insurance exchange first, before the Affordable Care Act would permit experimentation of a different sort in 2017.

“Over the last few years, the Shumlin administration hasn’t done anything to give Vermonters confidence that we could handle being innovators in health care,” says Chris Pearson, a Progressive state rep and vice-chair of the House Committee on Health Care. “There were just too many bad headlines about the nightmare of enrolling, computer problems, and cost over-runs.”

As a result, polls show, the popularity of Green Mountain Care is not what it was even a year ago. The Vermont Workers Center plans to do more grassroots organizing around the shortcomings of Vermont Health Connect coverage.

Meanwhile, in the Vermont Progressive Party, Statewide Organizer Kelly Mangan has “gotten a lot of member feedback about running a candidate for governor next year.”

This is something her third party refrained from doing in the last three election cycles, to avoid putting a Republican in office—who would have opposed Act 48 from the outset or shelved it sooner than Shumlin did. Now, the growing estrangement of labor voters from the Democrats could lead to Shumlin’s replacement by a Republican anyway.

But personal health problems may prevent State Senator Anthony Pollina, the VPP’s most experienced statewide standard-bearer, from running for governor. (In 2008, he placed second in a three-way race).

A much longer version of this piece first appeared in Working In These Times.

A version of this article appeared in Labor Notes #434, May 2015. Don't miss an issue, subscribe today.