Steward's Corner: In a ‘Right to Work’ State, Union Grows by Fighting Racism 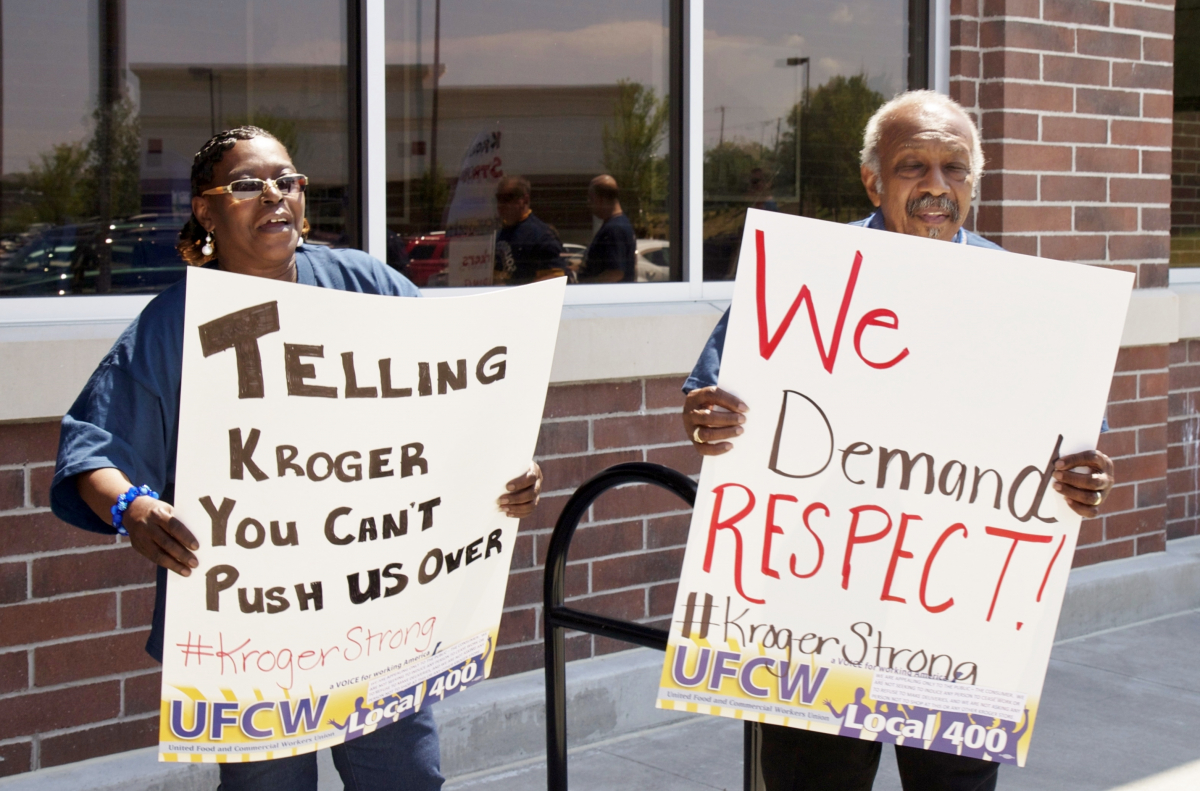 Food and Commercial Workers Local 400 represents workers at some Virginia Kroger stores and is organizing at others. At a Portsmouth Kroger, stopping a racist manager made the union popular. Photo: UFCW Local 400.

Racism is still a part of our everyday lives. The recent police murders of Michael Brown, Eric Garner, and Tamir Rice highlighted this fact in the national media—forcing many of us to confront the fact that, despite our progress, we have a lot of struggle ahead.

Even with a strong union, we often have to confront racism in our workplaces. I’ve worked for the Kroger grocery chain in Portsmouth, Virginia, for 16 years, and I know from personal experience what it’s like to fight racism on the job.

In 2011 a new manager arrived at my store. It quickly became clear she had a problem with everyone working at the store who was black, including me.

She would target black workers, disciplining us for things that white workers would not get in trouble for. Simple things, like not signing off when you cleaned the bathroom, would result in a write-up for anyone who was black—but not for white workers who did the same thing.

When the weather was bad, it would be black workers who were sent to get carts. When there was a spill, black workers would be assigned to clean it up. The pattern was clear.

Build unity: Don’t let management’s divisive tactics keep you apart. Our manager was clearly catering to white workers, doing them favors and giving them preferential treatment. But we called her out and continued to work together as a union. If the union allows managers to treat one group worse, the union gets weaker—and that hurts everyone.

Stand up: Even in “right to work” states, your union protects you.

Take notes: I kept a journal every day to use as evidence, and brought up past racist words and actions.

Do not give up: Companies often don’t want to admit they have bad managers. It can take time to win. Keep fighting.

When I first noticed what was going on, I confronted the manager about her behavior. She told me that she was just responding to how “the black girls” are—meaning irresponsible and lazy—and that she was not doing anything wrong.

Her racism extended to white workers as well. A white co-worker requested time off when his daughter died suddenly. Understandably very upset, he was requesting more time off than the bereavement leave in our contract.

But the manager said she didn’t care what had happened to his daughter, who had a biracial child—and even implied she had brought death on herself by being in a relationship with a black man. She said the daughter didn’t deserve any respect, told the worker to “get over it,” and refused his request.

I told my union representative what was going on, and we brought it to the attention of the company, but they refused to remove her. Kroger was not about to investigate its own manager, I realized. I was going to need to gather the evidence to prove what was going on.

I kept a journal for the next year, documenting every incident of racism. I made sure to take down the day and time an incident occurred, exactly what happened and what was said, and the names and contact information of anyone who witnessed it.

I also started calling out the manager every chance I got. I told her I thought she was acting inappropriately and treating African American workers unfairly.

The manager told me, “I’ve got a business to run.” She didn’t care how her behavior was impacting people, or what I or anyone else thought. When confronted she would always say, “That’s just your opinion. I’m the manager.”

King on ‘Right to Work’

Virginia has been a “right to work” state since 1947, when the Taft-Hartley Act first allowed states to pass such laws.

Despite its name, “right to work” does not give people rights or work. It simply allows people to get the benefits of a union contract—including obligating shop stewards like me to represent them—without having to pay dues to cover the costs of their representation. Today it’s the law in 24 states.

“Right to work” laws have a racist history. They were first passed in Texas, Arkansas, and Florida as part of a campaign that tied unions to integration. “Right to work” proponents argued that unions were against Jim Crow laws, and needed to be stopped.

Martin Luther King, Jr. said in 1961, “In our glorious fight for civil rights, we must guard against being fooled by false slogans such as ‘right to work.’ It is a law to rob us of our civil rights and job rights.

“Its purpose is to destroy labor unions and the freedom of collective bargaining by which unions have improved wages and working conditions for everyone…Wherever these laws have been passed, wages are lower, job opportunities are fewer, and there are no civil rights.”

Eventually she came after me. I was working in the grocery department and had been injured by some falling boxes. While recovering I worked on scan-file, and when a job opened there, I applied for it.

When I interviewed, I found out she had already given the job to someone else. She told me she thought I worked too much for the union and not enough for Kroger.

Thanks to our union contract, though, she wasn’t able to get away with denying me that job simply because I was standing up for myself and my co-workers. We filed a grievance and won. I got the position, and she even had to apologize.

Since Virginia is a “right to work” state, not everyone in our store is a union member. (See box.)

But when people saw we could stand up to our racist manager and be protected, many who’d never been interested in the union before came to me and signed up. They wanted to join me in fighting back.

We continued to document everything she did. We put together a team of people from different departments and shifts to make sure we caught every incident. We filed grievances every time we could, so that Kroger would recognize it had a problem manager.

As we got stronger, the manager got more desperate in her attempts to get rid of us. Finally she made a mistake even Kroger could not ignore. She was trying to get some of the “black girls” fired for not signing their names properly after cleaning the deli. To make them look worse, she forged a customer comment card with a complaint.

After nearly two years, she was finally gone. My co-workers and I got rid of the bad, racist manager, and came out stronger.

Laverne Wrenn is a scan coordinator and shop steward in United Food and Commercial Workers Local 400.

A version of this article appeared in Labor Notes #432, March 2015. Don't miss an issue, subscribe today.
Related
UFCW Reformers Look to 2023 »
Trader Joe's Union Campaign Takes Two Steps Forward, One Step Back »
A Life in Transit: ‘What You Can Get Is Set by How Far You Are Prepared to Go’ »
When Workers Swapped Segregation for Solidarity »
Richmond Educators Are First In Virginia to Win Bargaining Rights »