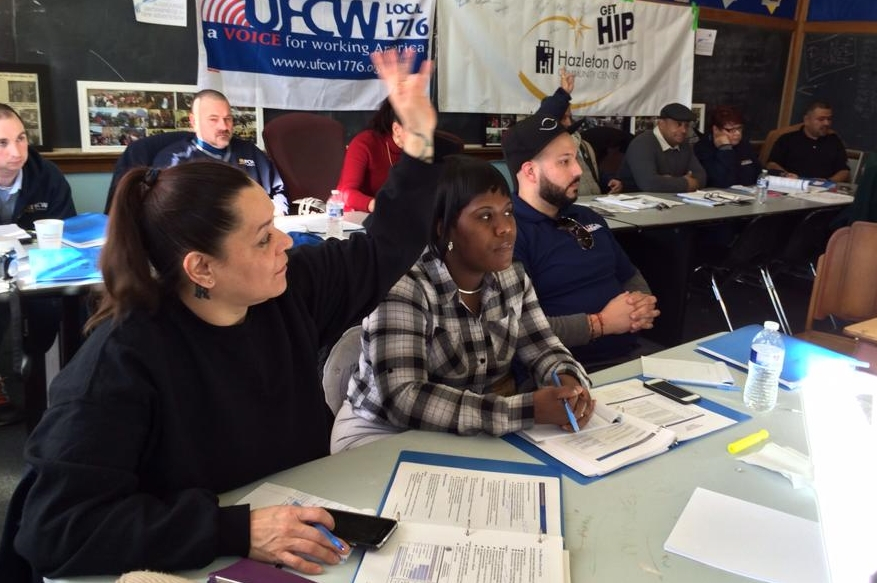 Going beyond contracts and grievances, the United Food and Commercial Workers is serving its members in a new way: helping immigrants prepare to get legal authorization to work, under President Obama’s recent executive order. Photo: Michelle Kessler, UCFW Local 1776.

Going beyond contracts and grievances, the United Food and Commercial Workers is serving its members in a new way: helping immigrants prepare to get legal authorization to work, under President Obama’s recent executive order.

UFCW unveiled the national initiative in March. The union plans to train 100,000 members on eligibility requirements and help them gather the necessary documents to apply. About 700 members have been trained so far.

While DAPA and DACA won’t lead to citizenship, they will grant legal permission to work—which can be “life-transforming,” says UFCW Executive Vice President Esther Lopez.

Up to 5 million of the estimated 11 million undocumented immigrants in the U.S. are expected to be newly eligible. The statuses will last for three years, by which time immigration activists hope real reform will be underway.

The new and expanded statuses were supposed to go into effect by May, but a federal district court in Texas put the plans on hold. Despite this setback, UFCW is pushing forward with its program.

The training starts with a three-day intensive for local staffers, stewards, and member leaders in a region or at an interested local. International union staff and lawyers walk participants through eligibility details and application procedures.

Once trained, Lopez says, local leaders will “go into plants and stores and answer questions that members may have.”

“The end goal is to train our local unions so they can hold these workshops on their own,” said Tim Schlittner, a UFCW staffer. “When it moves into the application period, we want to make sure as many locals as possible are prepared to help members get their applications in.”

Local 75 represents 30,000 workers in Ohio, Indiana, and Kentucky. “We have a lot of members in food processing, and some of the plants are 85 percent or 90 percent immigrants,” said staffer Bill Dudley, who attended a recent training.

Once local staffers understand the process themselves, Dudley said, they’ll hold a “train-the-trainer” for members who want to help, and offer their first DAPA clinic in April.

Read how Chicago activists built a network to defend immigrants. “The Chicago Committee Against No Match has organized hundreds of activists throughout the area to respond immediately to the firing and harassment of workers whose names come up on no-match letters [from an I-9 audit or “silent raid”]… For forward-looking unions, joining with community groups to fight no-match letters can show immigrant workers anxious to challenge their employer that they have a home in labor.” –The Steward’s Toolbox, pp. 153-6.

Learn best practices for bargaining to guard against audits. UNITE HERE Local 2 in San Francisco started negotiating immigrant protections into their contracts. “The agreement requires employers to notify the local as soon as they receive a no-match letter and gives employees up to a year to get documentation without loss of seniority.” –A Troublemakers Handbook 2, pp. 247-8.

Buy our books at store.labornotes.org.

AN END TO FEAR?

For those eligible, the new programs could put to rest the constant fear of having their work status audited.

“There’s a lot of people I know who have problems with papers,” said Guerdie Celas, a Local 1776 steward at JBS meat processing company in Pennsylvania, who attended a February training. “I see what people are going through.”

Immigration and Customs Enforcement mostly stopped its physical raids on workplaces in 2009, replacing them with I-9 audits, also known as “silent raids.”

Companies in the U.S. are required to have every employee fill out an I-9 form, certifying that he or she is legally eligible to work here. You probably filled one out last time you were hired. When ICE audits, it can fine the employer and demand that it fire anyone whose I-9 doesn’t check out.

An agreement between ICE and the Department of Labor is supposed to prevent I-9 audits where there is an “ongoing labor dispute.” Still, immigrant workers often fear that organizing could lead to inquiries about their status. For instance, 125 workers at an Oakland bakery were abruptly audited and fired in 2013—shortly after their contract expired, and as some were agitating for raises.

Some UFCW locals have helped workers use the limited rights they have in this tough situation. Members can assert their Weingarten rights to bring a union representative with them to challenge management about the reasons for audits. Several locals have negotiated contracts that explicitly limit management’s ability to check workers’ I-9s.

But often, all the union can do is buy workers a bit more time. Ultimately those outed as undocumented are forced to seek new jobs.

So achieving DAPA status would lift a big weight off anyone’s mind. And if enough people in a given workplace no longer have to fear retaliatory audits, it could give a crucial boost to new organizing or union activism.

NOT ALL ARE ELIGIBLE

Not all members attending the trainings are DAPA-eligible. Some will find out they’re excluded because they cannot prove five years of residency in the U.S., they don’t have a clean criminal record, or they don’t have a child who’s a citizen or legal permanent resident.

Immigrant rights groups have criticized Obama’s order as too narrow. UFCW isn’t satisfied either. The union backs a pathway to citizenship for workers in the U.S.

“We have not stopped our fight for a real and permanent solution,” says Lopez. “DAPA and DACA are a welcomed relief for our communities, but it is not what we are looking for.”

Other training attendees are members who have already become citizens with their union’s help and want to pass it along. And others were born here, but just want to help their co-workers.

Celas, who emigrated from Haiti 10 years ago, has legal permission to work, but was eager to learn more about the new program. Since the training she has helped friends understand DAPA eligibility, and spent lunch hours urging co-workers with green cards to consider working with the union to become citizens.

The union’s DAPA program is free, like the naturalization assistance the union has offered for the past two years. While individuals still have to pay form-filing fees, the union is setting up a scholarship fund to help defray these costs too.

Nicolas Costas works at the Sugar Creek Packing Company in Ohio. When Local 75 held a clinic last November for people interested in immigration services, he jumped at the chance.

On March 13 he completed his naturalization process and was sworn in as a U.S. citizen. Costas says he has friends working in other UFCW-organized plants who plan to follow his lead and work with the union on their naturalization.

Nationally about 100 members have worked with the union to go through the naturalization process, which “has saved our members over $150,000 that they would have had to pay a lawyer to do this,” said Lopez. But only workers with a green card (legal permanent residents) are eligible for naturalization.

The DAPA and DACA trainings are not limited to UFCW members and staff. The union is holding regional trainings with attendees from the Hotel Employees (UNITE HERE), Ironworkers, and Teachers (AFT) unions, plus local community allies.

“It’s an opportunity to introduce ourselves to non-union workers, too,” said Schlittner. “We’re building real inroads in whole immigrant communities with these trainings.”

Visit ufcwimmigrationguide.org for the union’s detailed, bilingual guide to determining eligibility for the new status and how to apply.