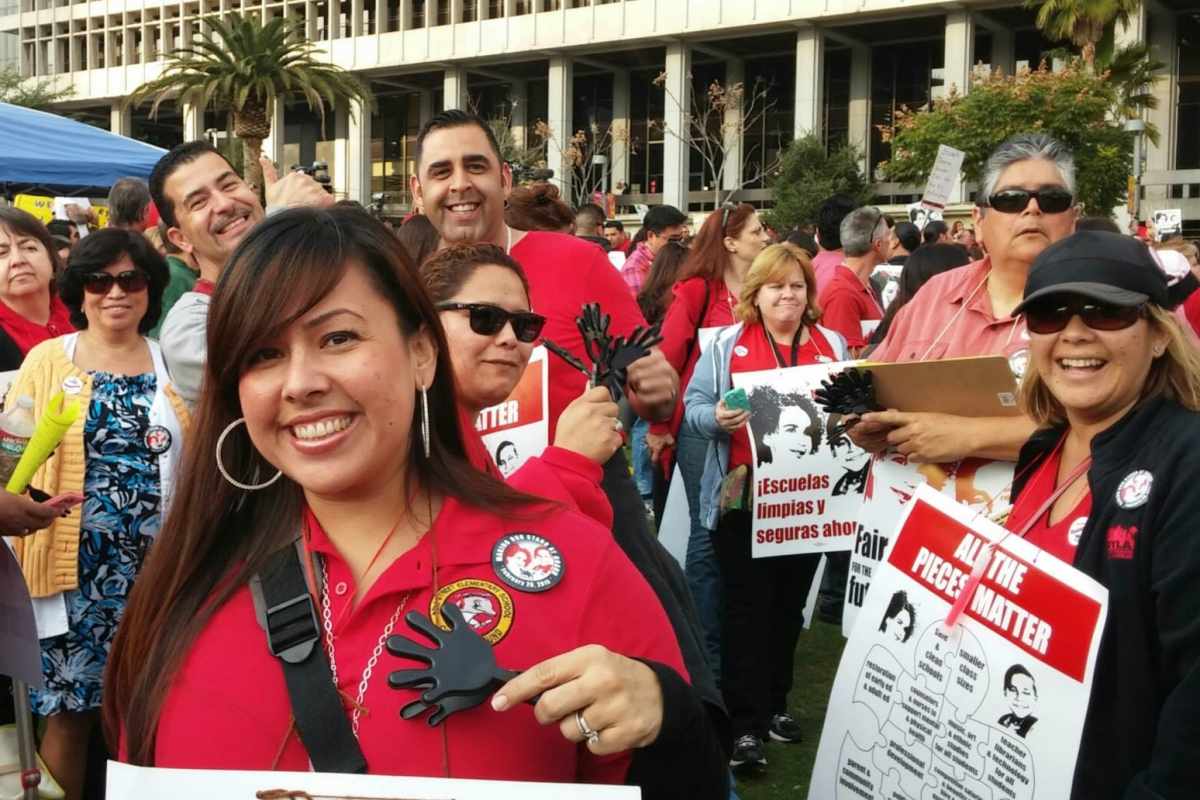 Fifteen thousand teachers, counselors, and other members of United Teachers Los Angeles filled downtown’s Grand Park on February 26 to demand a fair contract for themselves and their students. Photo: UTLA.

Fifteen thousand teachers, counselors, and other members of United Teachers Los Angeles filled downtown’s Grand Park on February 26 to demand a fair contract for themselves and their students.

“I am here to tell you that I am sick of not having enough of anything—especially teachers,” Beverly’anne Ogorro, a student at Dorsey High School, told the cheering crowd.

A week before the rally, UTLA had declared impasse. Its negotiations with the nation’s second-largest school district, L.A. Unified, covering 31,000 employees, are now in mediation.

“I feel disappointed and betrayed by the district. We took pay cuts to help the district get through a tough time,” said Leticia Duggan, a teacher in the pre-Kindergarten School Readiness Language Development Program. She walked the picket line with her six-year-old daughter, a public school student.

“I think the demands that we are making are more than fair,” Duggan said. “We’re not asking for something outrageous. We are asking for cleaner and safer schools, for a payback of wages we lost three years in a row.”

Teachers and support staff lost ground in their last contract, signed right after the 2008 economic crisis and after courts blocked a planned one-day strike. It expired three years ago. A shortened school year and numerous furlough days between 2008 and 2011 also hit members in the wallet.

After 20 bargaining sessions since the summer, the district has made no offers on class-size caps or staffing ratios. It’s continuing to stand by its offer of a 5 percent salary increase—though teachers have gone without a raise for eight years.

Three thousand middle and high school classrooms have more than 45 students apiece, according to the superintendent’s own report.

The high-energy, diverse crowd—educators in red T-shirts, nurses in white coats, students with banners and noisemakers—flooded onto Broadway as the chants grew louder, demanding that the district and board bargain in good faith.

Speakers included rank-and-file members of the negotiating and organizing teams, parents, high school students, community members, and presidents of the National Education Association, California Federation of Teachers, and California Teachers Association. (UTLA is affiliated with both the NEA and the AFT.)

The rally followed districtwide picketing February 12 at 850 schools. Members, parents, and community allies also signed an open letter to the school board, supporting the educators’ 12 demands on salary, working conditions, and the learning environment.

The contract campaign strategy reflects the vision of the local’s new leaders, who swept into office last March on the Union Power slate. Since taking over, they’ve emphasized member organizing and partnering with parents and the community.

The new leaders have mobilized around a platform they call “The Schools LA Students Deserve,” modeled on a similar initiative by the Chicago Teachers Union. Demands include safe, clean, and fully staffed schools, smaller class sizes, a commitment to arts, music, and physical education, and good salaries and benefits to encourage teacher retention.

Members ratified this platform in a 2013 referendum that called on the union to mount a contract campaign, starting by working with community groups and parents to identify shared issues. It also demanded UTLA put more resources into both member and community organizing and plan a series of escalating actions.

After the Union Power slate won office, this program became the basis for its contract campaign.

Since the union declared impasse, each of its eight areas has begun holding trainings for chapter chairs—the elected leaders at each school site—and activists. UTLA plans a series of escalating actions, including faculty meeting boycotts, beginning March 24.

Meanwhile, the Union Power caucus has been holding its own general membership meetings every month. Attendance ranges from 15 to 40 people.

The ongoing caucus was created after Union Power’s election win to channel energy into member organizing for the demands the slate had campaigned on. Any UTLA member can join. Recent discussions have been zeroing in on which demands are top priorities in the areas of working conditions and learning conditions.

The caucus is also working to engage newer teachers in the union. In February it held a meeting for student teachers and those with one to two years of experience to discuss the contract demands and the connection between social justice education and unionism.

L.A. teachers hope their renewed willingness to fight—not just for themselves, but for their students and communities—will be enough to turn the tide.

“The recession, the cuts to the bones at schools, the attacks on public services, the increasingly savage racism and economic inequalities that our students face,” declared Caputo-Pearl at the February rally, “all of those have set us back, and we’re not going to take it anymore.”

Karla Griego is a UTLA member and a teacher at Buchanan Street School.