Steward's Corner: Use Recertification to Build Your Union 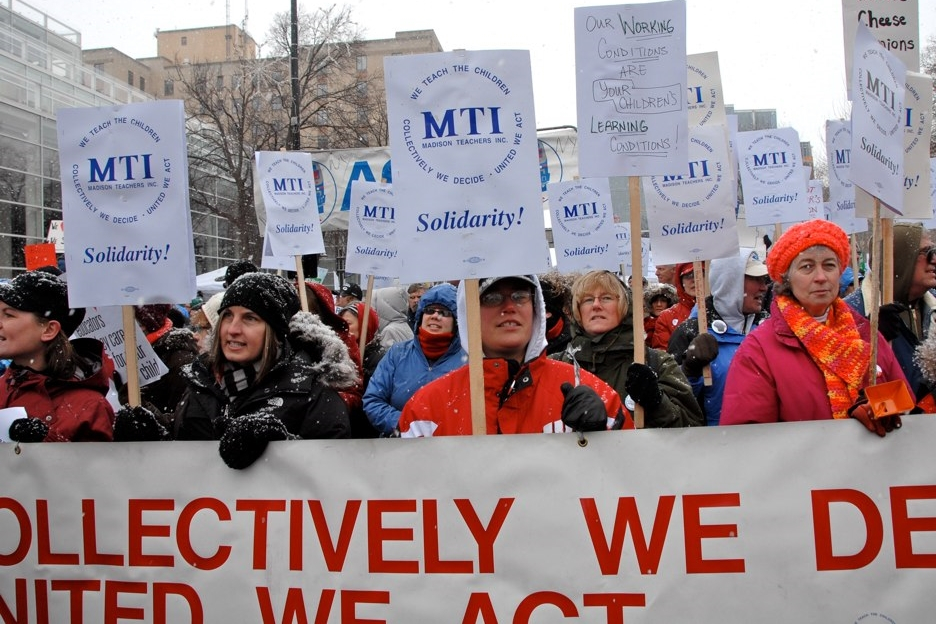 Many thought Governor Scott Walker’s anti-union Act 10 would be a death sentence for Wisconsin’s public sector unions. They’ve been given a high hurdle to clear: every year they have to recertify the union with yes votes by 51 percent of the bargaining unit. Not voting counts as a “no” vote.

But teacher unions around the state, while objecting to a law that ties two hands and a leg behind their backs, have taken the law’s obstacles and turned them into organizing opportunities.

Recertification grants a union legal recognition to bargain with its district—but only over the one topic Act 10 allows, wages. And increases are legally capped at inflation, around 2 percent. Some public sector unions have opted not to recertify, seeing it as pointless when bargaining is so limited.

But half the state teacher locals did recertify this year, including many of the largest districts, such as Madison, Green Bay, Milwaukee, and Racine.

The Wisconsin Employment Relations Commission conducts the votes. This year unionized workers could vote by phone or online, for a two-week period November 5-25.

“We like doing it,” said Milwaukee Teachers Education Association Vice President Kim Schroeder. “It’s a constant reminder that the system is made for us to fail. Even when the rules are stacked against us, we can still win.”

Racine teachers got 87 percent of teachers to vote, and 98 percent yes. (For “no” voters, there’s little incentive to vote, since not voting is equivalent.)

While the law presents a unique challenge that unions in other states and sectors don’t face, the lessons of how to win are the same basic steps as any organizing campaign: list-building, phone-banking, having leaders in every building, and having the capacity to reach all your members in a short period of time.

In 2014, voting began the day after public sector unions tried and failed to unseat Walker in midterm elections, so unions were already in full turnout mode.

The first step is to make sure the list provided by the employer is accurate.

With non-votes counting against you, this is essential. A teacher who’s no longer employed but still on the rolls hurts the outcome. Schroeder said it took a long back-and-forth with the district to get the list fully updated.

On the union side, list updating has become part of the local’s ongoing program, not just something they scramble to put together before the vote. At the beginning of the year, the Milwaukee union gives each building representative a list of employees the union thinks are working at the school. The rep updates the list with new employees and those who’ve left, and returns it to the union office.

Having active leaders at each school is essential. If anything, having recertification loom each year motivates unions to build organization.

While the exercise is an unfair bar for unions to meet, it creates urgency that can help unions with an organizing model improve their turnout for their other campaigns, too.

Leaders at both Racine and Milwaukee said it helps to do a big campaign launch. “We had a committee that put the campaign together,” said Al Levie, a Racine teacher who helped lead the recertification campaign. “We created the timeline, the literature, the training.”

Levie helped train all reps on the recertification process. “They took their membership list building by building, went around asking people to vote,” he said. “This year in the first week [of voting] we won the election.” Nonetheless they continued turning out votes in the second week, to get the highest participation possible.

In Milwaukee, leaders tried to make a fun event out of the first days of voting, getting people together for a party at lunchtime or after school. The goal was to get votes in right away, before interest waned.

Phone-banking filled in the gaps when employees couldn’t be reached at work. Unions tracked who reported voting, with the phone-bankers updating leaders at the school sites and vice versa, so they could zero in on those who hadn’t yet voted.

“Once you ask somebody, it’s fairly easy to get a yes,” said Milwaukee teacher and union executive board member Stephanie Schneider. “The biggest challenge is just getting everybody.”

While the election results looked good for the teacher unions that participated, winning recertification every year has to be part of a bigger strategy to stay organized.

Statewide, teacher union membership has plummeted more than 30 percent since the law was passed. Not only is membership voluntary, but the law also prohibits employers from deducting dues from employees’ paychecks. The union has set up a separate process for members to pay union dues.

Since the Wisconsin Employment Relations Commission shares the list of who voted (just not how people vote), the union can use last year’s voting results—targeting teachers who voted but are not yet members. In Milwaukee, they do a big sign-up push in the summer.

Unions have to work extra-hard to get people to pay dues, given that they can’t win improvements through collective bargaining. Building membership really comes down to identifying issues that would make people want to join.

FIGHT FOR WHAT MATTERS

Before Act 10, “for a lot of people it wasn’t something you thought all too much about when you sign your contract—it was a given you’d join the union,” Schneider said. But now, “since we couldn’t conduct bargaining like we had in the past, we had to demonstrate the need for the union.”

What’s most crucial is engaging in campaigns on the issues teachers and school employees care about. This year the Milwaukee union fought to raise wages for teaching assistants and to add preparation time for teachers. It mobilized teachers to school board meetings, and engaged with parents and the public.

In Racine, leaders facilitated discussions at every school to identify the issues affecting teachers. The union does take on specific school concerns, but on a larger level, it found the key issue to be the attacks on public schools. The state has cut public school funding across the board, and is diverting remaining funds to pay for proliferating private and charter schools—with devastating effects.

So the Racine union has framed its work as a fight to reclaim the teaching profession. “It’s hard,” said Levie. “People have to see the union as absolutely relevant.”

With no time to recover after winning recertification, Milwaukee and Racine teachers had to pivot into an even bigger fight. Under the guise of accountability, an assembly bill introduced in January would close schools deemed failing based on student test scores, replacing them with charters or private schools in the voucher system.

The unions aim to stop it. Teachers testified at the state capital about the disastrous impacts such policies have had already.

“Messaging-wise, it’s part of the same fight,” said Schroeder. “These forces want to end our union, and end public schools. We show our strength by recertifying.”

This article has been corrected to reflect that teachers unions have set up a separate process for members to pay dues not for donations.

Samantha Winslow is co-director of Labor Notes.samantha@labornotes.org
Related
Seattle Teachers End Week-Long Strike »
After Strike Threat, Wisconsin Nurses Get a Possible Path to Union Recognition »
Wisconsin Nurses Set to Strike, As Employer Claims It's Banned from Bargaining »
How Educators in Brookline, Massachusetts, Won an Illegal Strike »
The Sign Says It All: How Unions Can Stop Employers from Crying Poor »