At Last, Private Sector Faculty Get Green Light to Unionize 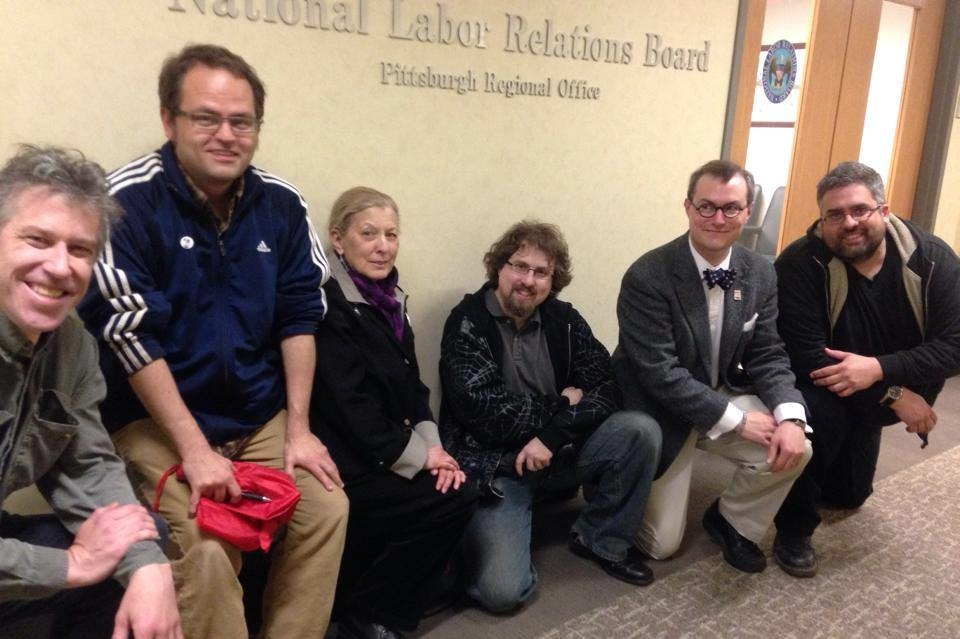 Adjunct faculty won a union at Duquesne in 2012, but the university is stalling. The new federal ruling means organizing could spread from adjuncts to full-time faculty at private colleges. Photo: Randa Darling, Adjunct Faculty Association, Pittsburgh/USW.

A new Labor Board ruling could finally unstick the unionization of professors in the private sector—a project that’s been stalled for 35 years.

“People for years have talked about when Obama’s NLRB finally gets stabilized and takes on the three big higher-ed issues,” says longtime contingent faculty activist Joe Berry. “And finally we’ve got a decision on two of them.”

About 1 in 3 higher-education instructors works at a private college or university. But unionization efforts there virtually halted after a 1980 ruling that, because of their role in campus governance, full-time faculty counted as managers.

If the reasoning in NLRB vs. Yeshiva seemed far-fetched then, it’s become even farther-fetched in the 35 years since—something the board acknowledged in its precedent-setting December ruling. It upheld union rights for the faculty at Pacific Lutheran University (PLU) in Tacoma, Washington, who’ve been organizing with Service Employees (SEIU) Local 925.

The decision notes the creeping “corporatization” that’s encroached on university decision-making. It observes that “colleges and universities are increasingly run by administrators, which has the effect of concentrating and centering authority away from the faculty.”

And it sets out new criteria for deciding when full-time faculty will be eligible for the board’s recognition, based on whether the administration really follows faculty recommendations on academics, enrollment, and finances.

“We think this means universities are going to have a very difficult time establishing that any faculty members have managerial authority under this framework,” said SEIU lawyer Paul Drachler. “With respect to contingent faculty, it wasn’t even a close question in this case.”

Faculty unionization boomed in the 1970s. But after Yeshiva, some administrations refused to renew contracts. Other bargaining units hung on, but lived under the threat that at any moment their administrations might ask the NLRB to review their certifications.

Private sector faculty union drives mostly ground to a halt. The big exception has been the recent spate of part-time adjunct organizing, most prominently by SEIU. Adjuncts are often hired to teach one course at a time, and bounce between campuses to patch together a meager living—they could hardly be ruled managers.

To be clear: the Labor Board can’t ban anyone from collective bargaining. But if you’re in its jurisdiction, once you’ve demonstrated majority support to the NLRB’s satisfaction, your employer is legally obliged to come to the bargaining table. If the NLRB doesn’t cover you—this is true of farmworkers and domestic workers, too—you have to find other ways to push the employer to bargain, such as strikes or public pressure.

Public sector faculty, meanwhile, aren’t governed by the NLRB, but by state boards. Their organizing rights vary according to state laws. Some have organized all faculty, from tenured to adjuncts.

A recent example is the University of Oregon, where faculty recently won a first contract as a single bargaining unit, affiliated with both the Teachers (AFT) and the University Professors (AAUP). The contract included significant raises for everyone, and also boosted hundreds of adjuncts into permanent jobs.

The PLU ruling opens the door for private sector faculty to adopt a similar approach. “Our strategy is to look at faculty work, and not so much who’s doing the work,” said AAUP Executive Director Julie Schmid. “We believe the people doing the work of the faculty should be organized together, whether adjunct, tenure-track, or full-time, non-tenure track.”

AAUP’s 79 bargaining units are mostly on public campuses. The rest of its 152 U.S. chapters are known as “advocacy chapters,” acting as professional organizations rather than unions. The ruling could clear the way for advocacy chapters on private campuses to move toward collective bargaining status, if they wish.

In the currently popular “metro strategy,” adjuncts organize simultaneously on campuses in the same city. It’s gotten farthest in the Washington, D.C., area, where SEIU Local 500 has unionized five out of seven campuses, representing 70 to 80 percent of adjuncts. Now they could reach out to full-timers at the same institutions.

“What we’re really facing is this seemingly endless stratification,” said Anne McLeer, a former adjunct now in charge of Local 500’s higher ed campaigns. Three-quarters of faculty were on the tenure track in 1970, she said. Since then, full-time jobs have splintered into numerous layers, many of them contingent.

“One of the big goals is to deconstruct this multi-tiered system,” McLeer says. “Not that it’s going to be 100 percent tenure-track positions, but at least a return to a situation where there’s more equity in the job market.” The new ruling could help.

Many higher education institutions in the U.S. have religious roots. Some, including PLU, have resisted faculty organizing on the grounds that forcing them to recognize unions violates their First Amendment religious freedom.

The decision lays out stringent criteria for a religious exemption. The board will exercise jurisdiction unless the school can show it requires faculty members to play a specific role in providing students with a religious educational environment.

The court found PLU didn’t meet the criteria. “I do know what it means to perform religious functions, because I happen to be a Lutheran,” said adjunct faculty member Jane Harty. “The religious functions that I perform are all done at my parish church. What I teach at PLU is entirely secular: I teach Beethoven and Shostakovich and things like that in the music department.”

The new clarity should unstick several cases where faculty have waited in limbo—including Manhattan College, where Fahey and his co-workers voted four years ago in their bid to organize with the New York State United Teachers. The ballots were impounded, uncounted.

Others include St. Xavier, with the Illinois Education Association; Seattle University, another SEIU 925 campaign; and Duquesne University, organizing with the Steelworkers-affiliated Adjunct Faculty Association as part of a Pittsburgh metro strategy.

Adjuncts won Duquesne’s 2012 vote overwhelmingly. The university has stalled ever since, prolonging the process with doomed legal objections, said Robin Sowards, an adjunct now on the union staff. He expects the appeals to continue. “The legal process is not one we ever expected to be fast, so the legal process has not been our focus,” he said.

“Our view has been we don’t need the boss’s permission or the government’s blessing to be a union. Our focus has been on acting like a union, putting pressure on the administration over particular issues, and getting members involved.”

In this way the union won a 50 percent raise—applied not only to the 88 adjuncts in the bargaining unit, but to 500 adjuncts campus-wide.

As for private sector graduate students, for a while it appeared New York University would become the test case—but after years of delay, the university agreed in 2013 to voluntarily recognize their union, affiliated with the Autoworkers (UAW). Recently New York grad employees at Columbia University and the New School have filed petitions to join the UAW too.

Though the PLU ruling comes from the Labor Board’s top body, it’s not the last word on private sector faculty status or religious exemptions. PLU is expected to appeal. The case could reach the Supreme Court.

But it does create a window of opportunity that unions should seize for organizing now, says Berry. “The worst mistake people could make would be to wait two years to see what the Supreme Court decides,” he said. “That would be tragic.”

He compares this moment to the period right after a national labor law first passed in the ’30s. As Berry tells it, organizers “went out and said, ‘The President wants you to join the union,’ and they rebuilt the Mineworkers union, which had almost died, and which then became the chief funder of the CIO.”

Though the Supreme Court threw out the law a few years later, Berry said, by then it was too late to stop the momentum of organizing already underway. The president, Congress, and the court were forced to accept another labor law—establishing the NLRB.

PLU’s votes were finally counted in January, but the outcome is too close to call. Thirty-eight of 122 ballots were challenged by either the employer or the union, so it’s back to the NLRB for months’ more haggling.

But like the Duquesne adjuncts, PLU faculty haven’t waited for the government’s approval. They’re campaigning for equitable raises—acting like a union.

CORRECTIONS: The photo credit has been corrected. Also, the original version of this article erroneously identified Pacific Lutheran University as in Seattle; it is in Tacoma.

Alexandra Bradbury is the editor of Labor Notes.al@labornotes.org
Related
Viewpoint: The NLRB is Underfunded and Understaffed—And That’s a Big Threat to the Current Organizing Wave »
Review: On the Line: A Story of Class, Solidarity, and Two Women’s Epic Fight to Build a Union »
How Starbucks Workers Won in Mesa »
The Hows, Whys, and Whats of ULP Strikes »
HELU: A National Strategy for Higher Ed Labor »