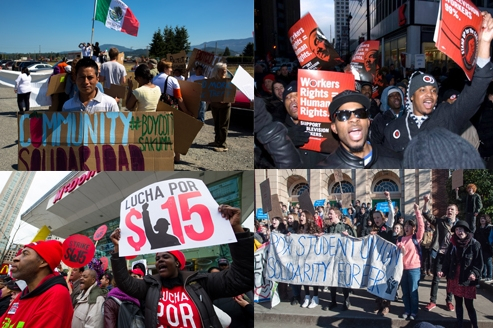 The year had a spirited and determined feel. Every time we turned around there was another sit-in or strike, ingenious job action or raucous flash mob.

Students walked out in support of their teachers, while teachers refused to over-test students. Bus passengers in Burlington, Vermont marched in support of striking drivers—who won a contract after 18 days. Social workers and their clients marched together in Chicago. UPS customers stood with fired package delivery drivers in New York.

Those drivers, members of Teamsters Local 804, held a spontaneous 90-minute walkout when one of their number was walked off the job in violation of the contract. The company fired all 250 participants, but everyone got their jobs back after customers united with their drivers to denounce UPS.

That wasn’t the only example of old-fashioned direct action getting the goods. Piston Automotive workers in Toledo struck their plant and won recognition—after just one shift out. Teachers struck and threatened to strike in dozens of cities and towns.

Migrant berry pickers at a farm in Washington employed several strikes to extract recognition from their employer. An overworked hospital staff refused to work any overtime hours, quickly getting management’s attention.

And railroad workers revolted against their own union’s dog-and-pony show when the union, SMART, tried to sell them on a contract with BNSF that would have permitted one-person train crews. They voted it down authoritatively.

Still, the steady whine in the background was the sound of employers chainsawing our contracts, hacking away at our pensions and health insurance. From the docks to the classrooms, workers saw their benefits under attack and their pay stagnant.

The year started with Machinists at Boeing having a pension-ending contract shoved at them—and ended with a serious federal erosion of the law protecting pensions.

New activist leadership at the largest postal union, APWU, formed an unprecedented alliance with the other three postal unions to counter cuts and propaganda-based budgeting. But closures of postal facilities have hardly slowed.

Meanwhile, Social Security is also trying to phase out offices with actual people in them, in preference for web-based services. Will that be like the Obamacare website? And New York State Nurses, also led by an energetic activist slate, fought and finally lost a battle to keep a Brooklyn hospital from closing. Real estate developers are getting the land for condos.

Brooklyn Cablevision workers, who have demonstrated unshakeable unity, have nonetheless experienced how hard it is to get a first contract from an obstinate employer. Nearly three years after they voted for the Communications Workers, they’re still at it.

And the fast food worker mobilizations have produced mixed results. The campaign for “$15 and a union” seems closer to winning $15 in some localities than to winning a union in any.

The $15 demand has reverberated, because wages have been stuck.

For most of the year, the economy added 200,000 jobs a month, for an improved unemployment rate of 5.8 percent, but hourly earnings only rose 2.1 percent, barely ahead of inflation. Young workers have even seen their incomes go down, with wage drops of 10 percent since the recession started in 2007. No surprise, then, that 95 percent of recent income increases have gone to the 1%.

Hiring is still depressed, as managers demand lots of overtime from existing workers rather than hiring additional people. “In the low-wage sector, it’s still a buyer’s market for the employer,” said Catherine Ruckleshaus of the National Employment Law Project.

The federal minimum stands at $7.25, which is $3.70 less than the buying power of the minimum wage in 1968. Tipped workers are stuck at $2.13, thanks to the restaurant employers lobby.

All this meant that wages became an urgent priority. The fast-food demand for “$15 and a union” spread to home care, airport, and federal contract workers, mostly initiated by the Service Employees.

Then, in time for Black Friday, Walmart workers joined in the fight for $15, abandoning more timid figures and sitting down in the street in front of Walmart heir Alice Walton’s $40 million New York apartment.

The Waltons are a symbol of just how much our low wages are benefitting the .01%. Working people underestimate it, said comedian Chris Rock in a New York magazine interview in late November: “Oh, people don’t even know. If poor people knew how rich rich people are, there would be riots in the streets,” he said.

There weren’t riots, but low-wage rage resulted in recent minimum wage increases in 11 states—even before November. Then voters raised the wage in Alaska, Nebraska, South Dakota, and Arkansas, during what were otherwise disastrous elections. Oakland upped its minimum too. San Francisco will hit $15 in 2018, Seattle a couple years after that, and Chicago $13 by 2019.

Traditional employers are watching the tech-based disrupters closely, and detaching themselves from any responsibility to provide regular work and pay. FedEx drivers, drywall installers, newspaper carriers, port truckers, and exotic dancers all won court claims this year that they were improperly classified as independent contractors.

Workers were beaten up by the Supreme Court, which decided that Illinois home care workers should live under right-to-work laws. The Harris v. Quinn ruling, whose ripple effects are hitting the nation’s 1.8 million home care workers, judged them “quasi-public” employees and said unions can’t require dues or fees. At least the court didn’t include all public workers, as some had feared.

Long-suffering Amazon warehouse workers, the court also ruled, don’t need to be compensated for waiting in line to be checked by security at the end of the day to see if they’ve stolen anything. Their humiliation will continue unpaid.

Immigrant workers and students continued to denounce the wave of firings and deportations hitting their communities. Detainees conducted a hunger strike in Tacoma, Washington. Recycling workers in a San Leandro, California, plant walked off the job in February when coworkers were fired, after a “silent raid” determined they were without documents. The fired workers just happened to be the same ones demanding an end to wage theft.

While Congress failed to pass any measure, Obama did promise some relief, finally.

And in early December the fast food fight blended with rallies against police violence, when strikers around the country held up their hands in the familiar “hands up, don’t shoot” pose. The strikes came on the heels of extraordinary rallies nationwide against racism and police brutality. We can’t wait to see what expanded troublemaking the New Year will bring.

A version of this article appeared in Labor Notes #430, January 2015. Don't miss an issue, subscribe today.