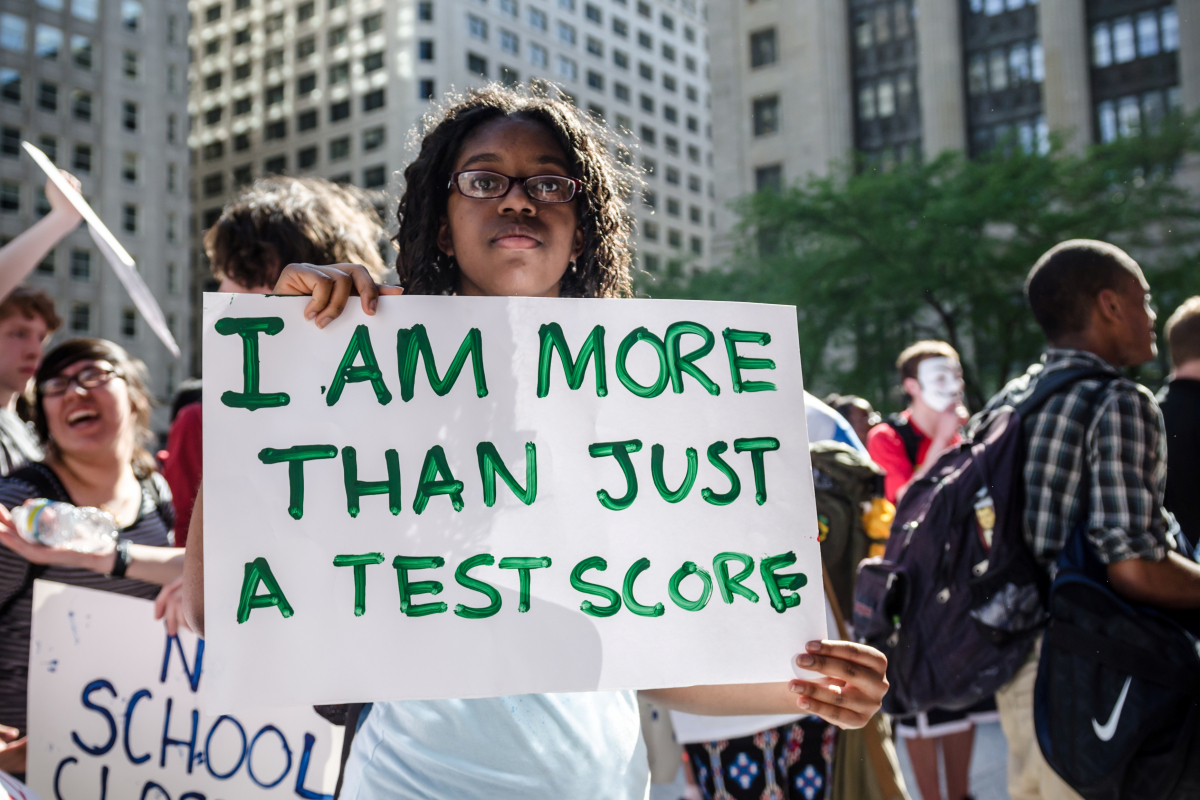 A Chicago student protested school closures last May. Administrators are forced to run their schools as “test score factories,” where teachers function as managers, supervising children whose job is to produce a good score. Photo: Sarah Jane Rhee/loveandstrugglephotos.com

In 2012 Detroit schools’ “emergency manager” unilaterally imposed on the teachers union a contract that allowed elementary school classes to jump from 25 to 40 students and high school classes to 61. Meanwhile, teachers got a 10 percent pay cut.

Detroit’s example was extreme, but teachers around the country are experiencing increased hours and gutted compensation. The business model of education reform that’s gaining traction is an extension of a process called “lean production” that transformed the private sector in the 1980s and ’90s.

In a factory, lean involves the deskilling and micromanagement of work tasks, speed-up, formation of teams, contracting out, and creation of tiers in the workforce.

It’s frightening that these precepts—which have proven so destructive to blue collar workers’ job security and work lives—have been imported wholesale into education.

The 2005 No Child Left Behind Act forced a heavy emphasis on test scores, making school funding (and survival) reliant on continuous improvement on standardized tests. Administrators are often forced to run their schools as “test score factories,” where teachers function as managers, supervising children whose job is to produce a good score.

My first two years teaching in New York City, I worked at an exemplary “lean” high school that twice received A ratings on its Department of Education progress reports. It was rated “well developed” (the highest possible rating) in a 2011 quality review.

Yet that same year, the New York Times cited the school as an example of a troubling new trend: schools with high graduation rates whose students are overwhelmingly unprepared for college. The City University of New York reported this school’s graduates disproportionately required remedial services in college.

While the school was excelling at aggressively implementing business-minded reform, it was failing as an academic institution.

The Department commended the school’s use of “a distributive team leadership model.” Basically, my principal was lauded for putting teachers on lots of different teams and giving those teams lots of responsibilities.

But since teams clearly weren’t improving student outcomes, why was the Department of Education so happy about them?

The team concept is a critical component of lean production. In lean workplaces, writes Labor Notes’ Jane Slaughter, teams are designed to enlist workers “in speeding up their own jobs… It is no longer enough for workers to come to work and do their jobs; they need to become ‘partners in production.’”

School managers promote teams as giving teachers a say in how their schools are run. In reality, team meetings highlight how little control teachers have over their time and workload.

Morning meetings can be particularly miserable. Teachers desperate for preparation time are forced to sit through an agenda focused on management concerns. In fact, the apparent purpose of teacher teams is to shift administrators’ workload onto teachers.

At my former school, for example, faculty teams were tasked with designing the rubric our principal would use to evaluate our teaching. Case-conferencing teams established flexible disciplinary systems so our administration wouldn’t have to discipline difficult students. Grade teams organized field trips and parties.

These tasks were piled on top of teaching workloads that were constantly increasing because of growing class sizes and cuts to support staff. Teachers at lean schools are stretched to their limits. This is not an accident.

The team concept both increases stress on the workforce and creates the illusion that workers themselves are responsible for this stress. After all, the teacher teams assign themselves the work.

Of course, in a lean school, teachers are never given the option to reject the team model, which generates the work. They can only choose between being a “team player”—volunteering for new tasks and responsibilities—and letting down their co-workers.

The result is, predictably, frustration and exhaustion. Frustration because teachers end up shortchanging their teaching responsibilities (planning lessons) to focus on team (administrative) responsibilities. Exhaustion because workloads were barely manageable before this additional work was assigned.

What makes lean production unique is its “management by stress” approach. To achieve maximum efficiency, management deliberately stresses workplace systems to the point of breakdown.

In Labor Notes’ Working Smart, Mike Parker and Jane Slaughter noted that production in U.S. factories was traditionally supposed to keep moving 24/7. Breakdowns were considered crises, to be avoided at all costs.

But in a lean factory, supervisors deliberately speed up production until someone can’t keep up. Such breakdowns are viewed as positive because they allow management to identify weak links, a place where a “smarter” (faster) way to work needs to be figured out.

Management makes a fix—in a factory, this could be moving the box of parts closer to the assembly line, or making the air gun easier to operate. Then, Parker and Slaughter write, “Once the problems have been corrected, the system can then be further stressed (perhaps by reducing the number of workers).” Production continues until the next breakdown occurs.

In education, the weak spots are teachers whose students score too low, and the fix is hiring different teachers.

This process is supposed to go on indefinitely; thus the lean term “continuous improvement.”

As schools have gotten leaner and leaner, teacher turnover has increased dramatically. Recent reports find that nearly 10 percent of teachers leave the profession before their first year is over, and researchers commonly estimate that roughly 50 percent of all teachers last less than five years.

Research indicates that turnover is 50 percent higher in high-poverty schools—which happen to be the laboratories for lean education—than in affluent ones. Under No Child Left Behind, the worse a school performs on standardized tests, the more it has to implement lean reforms.

If it doesn’t practice these reforms, it risks losing federal funding. Since the poorest school districts typically produce weaker test scores (no surprise, since they receive less funding per student), administrators in poor communities are often faced with a dire choice: go lean or go bankrupt.

The predictable increase in teacher turnover reflects another hallmark of lean production: replacing skilled workers with an unskilled, short-term workforce.

Day to day, high turnover hurts the shared sense of community in schools. A wealth of research shows that students fare better with experienced teachers. Yet advocates of lean education—from former New York Mayor Michael Bloomberg to Teach For America CEO Wendy Kopp—advocate programs (like TFA) that place inexperienced, poorly trained teachers in classrooms for one to three years, burn them out, and replace them with a new batch.

Another hallmark of lean production that’s made its way into schools is value-added assessment.

The concept emerged from the lean technique of value mapping. Managers track the flow of value through each stage of the production process. In a lean workplace, the ideal is an unobstructed flow of value from raw material to finished product. The ideal would be instantaneous material-to-product conversion.

Before tracking the flow of value, however, managers must, as lean production experts James Womack and Daniel Jones write, “specify value.” In lean schools, value is “specified” as test scores.

Teachers are thus managers who supervise the flow of value through their students, whose job is to produce test scores as efficiently as possible. If test scores drop, the teacher must not have properly managed the workforce. This language is used explicitly—the teacher must be a “CEO in the classroom.”

Unless they contribute to the production or flow of value, students’ emotional and social development, safety, comfort, and joy are all considered waste.

Value-added assessments are then used to impose rankings, another element of lean. Lean management guru Bob Emiliani advocates “an annual forced ranking of all associates.”

Forced rankings will sound familiar to those in cities where politicians and the press have used rankings to publicly humiliate teachers—even when those rankings are statistically meaningless.

Emiliani advises managers to “develop an action plan” for the “bottom ten percent” of workers, and if there’s no measurable improvement, “the associate would be subject to involuntary separation.” And for the best of the workers—more work!

Self-styled education reformer Bill Gates proposed in 2011, in the Washington Post, that policymakers should “get more students in front of top teachers by identifying the top 25 percent of teachers and asking them to take on four or five more students.”

It is critical for teachers to see how lean production is indeed “continuous”: in other words, it’s insatiable. The harder teachers work to satisfy the demands of lean managers, the harder we will be pushed, until we break down.

It is equally critical for parents to understand that their children are being subjected to school reforms that are in fact experiments in educational deprivation. Parents and teachers must fight lean education together, or learning will continue to suffer.

William Johnson is a special education teacher in New York. A version of this piece first appeared in Jacobin. Labor Notes also recently reported on lean methods in health care, at UPS, and in the postal service.

A version of this article appeared in Labor Notes #421, April 2014. Don't miss an issue, subscribe today.
Related
How Oakland Teachers Took Control of Our Return to School »
Employers Are Using the Crisis to Push Concessions They Don't Need »
Jordanian Teachers Union Leaves Behind Legacy of Wins »
Interview: 'Things Shouldn't Be Like This': Why One Amazon Driver Walked Out on Easter »
Pandemic Discrimination Against Asian Americans Has Long Roots »