Organizers Worth Their Salt 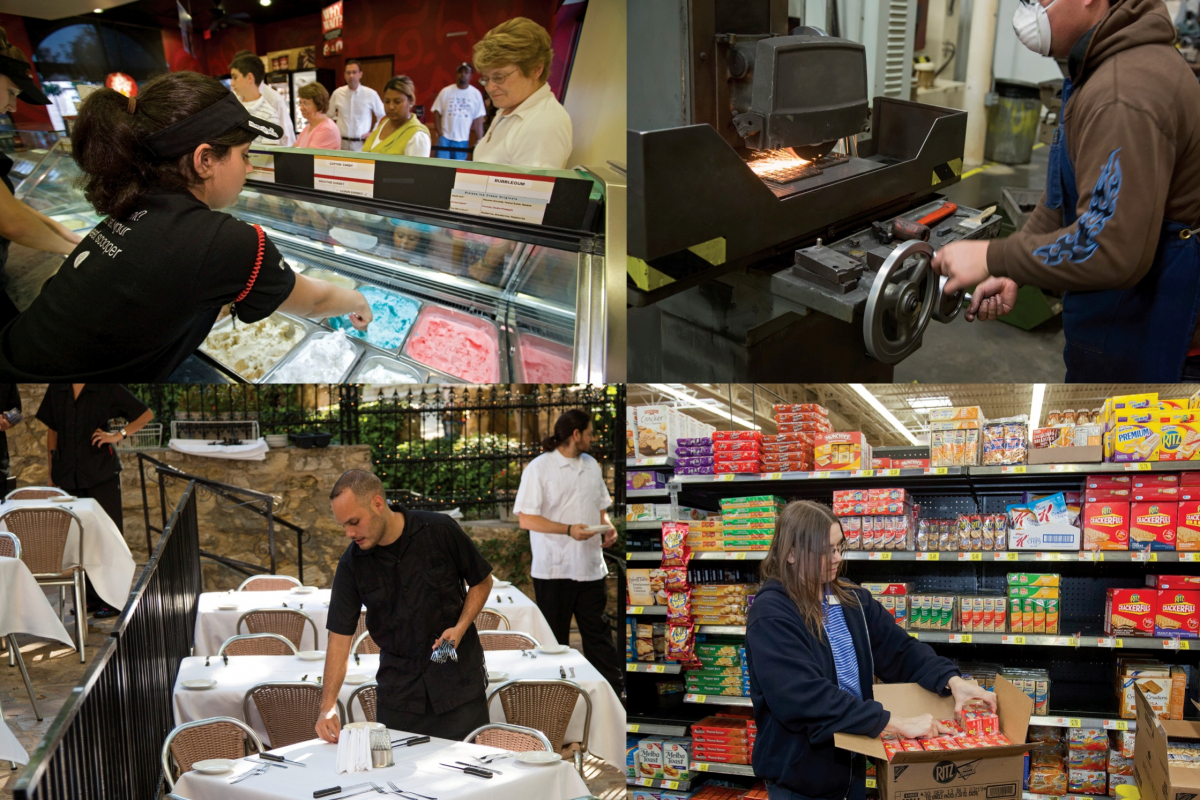 Many salts said they preferred doing their organizing from inside the workplace. Photos: Jim West/jimwestphoto.com.

Bosses hate a salt—a pro-union worker who’s taken a job with the intent to organize.

A few unions are recruiting salts these days, usually young people who apply for low-wage jobs in retail, hospitality, or logistics. But unions are reluctant to talk about salting, not wanting to alert management to look out for suspicious characters. In this article every worker will use a pseudonym and their situations will be disguised.

Former salt Kendra Baker says salting offers something the labor movement badly needs: a “space for young people to develop skills as workplace organizers.” The 2011 uprising in Wisconsin and the Occupy movement created “a lot of curiosity and enthusiasm about the labor movement,” she said.

Now coordinating a salting program, she stresses that salting ensures a union drive will have “a workplace-organizing component, to maintain a level of militancy on the shop floor and make sure the campaign is putting the workers first. Workers should be taking a lead on the messaging and on the goals and planning the actions.”

Salts these days tend to be young people who were activists in college—the same sort of folks many unions recruit to be staff organizers.

But salts we spoke with saw advantages to being on the inside.

Ronnie Stevens decided to salt after being a staffer. “I had come up against frustrations about lack of access to workers in the shop,” he said, “and the general frustrations that any organizer has trying to get in touch with people for that first conversation—as well as the trust aspect.

“But the core thing for me was the inside/outside dichotomy. It always felt kind of strange to me trying to go in and tell people what to do about their own workplace without really having much knowledge of it myself.”

Brian Smith said simply, “I like working.” But he also says “it’s easier as a political-minded person. People are more receptive to your ideas when you’re working with that person.”

Brittany Johnson originally salted with the goal of getting a staff job; some unions use that route. Now, she says, “I wouldn’t want to work as staff. I don’t like to be paid to think a certain way. In any staff position you have to follow the president’s vision. Your voice has no power on staff. When you’re a member you can talk as much as you want to.

“I’d rather be in the position I’m in than be sent around to do crummy organizing jobs, with no space to push back and say this is not worthwhile.”

Stevens, too, likes having “a certain amount of political independence I wouldn’t have as a staff organizer. I have the ability to disagree with somebody that is abstractly above me in the food chain. If I disagree, it doesn’t mean I lose my job.”

His union is one that grants salts more autonomy than some. “I have a fair amount of say in the direction and strategy of the way things go,” he said. “I’m not just feeding information.”

Johnson’s workplace has a union contract now, and she’s thinking of what her next salting job might be. Her father is ashamed she’s not using her college degree, she said. “But I feel like the exact opposite. I feel so proud that my job is ‘I get food out of the window, I give it to the customers.’

“Obviously I’m starting a lot of trouble in my workplace. But it feels clean.”

Of course, a major draw is the thrill of being right in on the action. “The salt is in a position to seize an opportunity quickly,” Baker said, “and that is a big advantage. That’s what’s so inspiring and invigorating: it inspires people to take further action, actually feeling there’s something they can do.”

Describing a march on the boss to defend a suspended co-worker, Jim McCormick said, “That was the first little taste of power, when we saw that fear in their eyes.”

Although most unions will be going for recognition and a contract, those facing large or formidable employers may be focusing on nonmajority shop floor organization for the time being.

The decision to use salts can color the flavor of the campaign—though some unions like to keep a tight rein. These just want the salt to collect names and addresses for home visits from staffers, and scout out potential leaders.

But most salts we interviewed said they were expected to organize: to set up meetings, to train leaders, to collect signed cards for union representation, and/or to instigate workplace actions about immediate issues.

Union staffers will advise you on how to get the job. “When you apply for a corporate job there are a billion questions on this internet psychological questionnaire,” explained Jon Isaacson. “The answers they want are not always obvious, like ‘if you see a co-worker stealing, what do you do?’

“The union had most of the answers and a method of figuring out the rest.” The union told Isaacson what to wear and “how to harass the managers till they hired me.”

Salts reported not a lot of trouble getting jobs they were overqualified for, particularly where turnover is constant. Johnson said management didn’t blink at her college degree and the union told her not to hide it. Nor did her co-workers find it too odd, given the state of the economy.

Johnson noted that managers tend to maintain the discriminatory demographics of the workplace: for instance, Latino dishwashers, black cashiers, and white servers.

Stevens said management’s biases helped him: “As a reasonably well-spoken young white guy I could get any job. I fit their model of someone responsible.”

The union doesn’t make a formal agreement with the salt—nothing written or enforceable—but relies on the salt’s enthusiasm for the project. One union does a lengthy vetting process beforehand, even taking prospective salts on retreats to assess commitment.

Once on the job, contact with a staff organizer is frequent, for strategy discussions and morale upkeep. Some unions have regular meetings of salts from related workplaces.

Isaacson’s union offered him $15 an hour for the time he spent applying for jobs, 15 hours a week, for up to three months. Any of that time not actively spent looking for work, he helped out on other projects.

Another union offers small stipends meant to cover extra costs: gas to meetings, for example. A third paid a salt, whose job offered very few hours, $15 an hour for eight hours a week to assist a staff organizer. (The combination was still far less than a living wage.) Most pay no stipend once the salt is on the job.

One union, though, subsidized salts on a low-wage job at $125 a week. At one point, they all decided not to take the money. “It didn’t seem right,” McCormick said. “We would have been taking in more money than the few amount of dues we were collecting. For our co-workers to find out, they would be like, ‘I’ve been giving that jerk $5 out of my paycheck every month; it’s all about the money.’”

Unions insist the salt maintain strict secrecy, not revealing their saltiness to co-workers, for fear management will find out. “The worst thing I can think of is for a person to expose a campaign that hasn’t yet been public,” Baker said.

Smith pointed out that “you never know what could happen at work. You can end up in a fight with someone over whatever, they could be pissed and blow you out of the water. And the whole organizing drive is now compromised.”

It’s touchy, though—these are co-workers you may be encouraging to take risks. You want to deserve their trust. Isaacson said he is OK with keeping his status under wraps both because “people would think it was weird if you were there with ulterior motivations” and because “it would be too easy for the company to make something of it."

Salts justify their means by their righteous end. “Everybody has secrets at work,” Johnson said. “Some of them are undocumented.” “With every job you have to keep up appearances,” Baker reasoned. “When you work for corporate America you have to live two lives, whether or not you’re a salt.

“It may seem disingenuous to your co-workers. It could also seem like this campaign is very important.”

McCormick, now a salt himself, was recruited out of the shop by a salt. He wasn’t mad when he found out his co-worker’s “ulterior motivations,” he said. He was just glad someone was there with a plan.

Besides the usual frustrations of organizing—co-workers who backbite, fatalism, those who are best off in the workplace not seeing the need for change—low pay is a problem for salts. Johnson took on two other part-time jobs.

“I couldn’t do the best job I wanted to do as an organizer because we were trying to meet co-workers outside work,” she remembered. “When do I have time to go for a drink after work? Our organizer says people like the person who brings in food for everyone. But I couldn’t afford to do that. Sometimes the organizer would give me money out of his pocket to do it.

“But I could not pay my bills on that wage.”

Johnson did work up to a better-paying job in her shop—the only one, she says, that might support a family. Isaacson wants to keep his retail job and finds sales intellectually challenging.

But he adds that his first salting job, at Starbucks, was the worst he’s ever had—“like a robot.” Mean bosses, the graveyard shift, heat and cold—there’s a reason your parents told you to go to college and dodge these lousy jobs.

However: “The job might be horrible but salting is fun,” Isaacson says. “You get to pull the wool over the boss’s eyes.”

An organizer’s goal is to see co-workers take initiative without your prodding. McCormick describes the day when “our flyers were all over the break room and bathroom before we even got there. It was a real good feeling—awesome!”

If You're Thinking of Salting

Talk to like-minded friends about taking on a project together. Do solidarity work for an existing campaign. Research your rights under labor law.

But his group went on to better things: One day the supervisor sent a woman worker home because, he said, she wasn’t keeping up with the guys. “She came and visited friends in various areas and as a group we immediately decided, no, this isn’t right. Together we did our own march on the boss. The people involved in that were the core of people who later went on strike.”

Another time, a petition got the boss to back down on charging a fee for a company-required test.

Stevens’s co-workers had a victory during January’s polar vortex: they were preparing a petition to alleviate the cold in their refrigerated workplace when the cold front rolled in. As the state closed highways, bosses said to keep working. But when workers left their machines, management gave in, sent them home, and said to take the next day off, too.

Is salting for you? At the end of the day, “we have to get jobs anyway,” Baker said. “We need more people to be doing this. If we want to build the labor movement, you need to be strategic about where you’re working.”