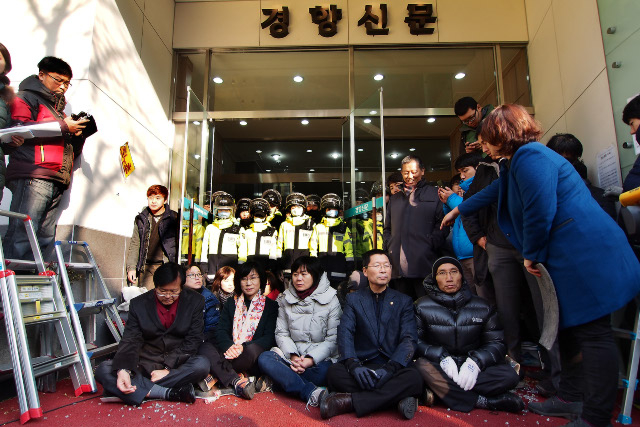 South Korea’s railroad workers have ended a 22-day strike, the longest such stoppage in the country’s history. Though they didn’t win a clear victory, they succeeded in placing the issue of privatization in public focus.

The government’s and management’s attack on the strike was ruthless to the point of recklessness, while the public’s solidarity and sympathy with the striking workers continued to rise.

And the full impact of the action has yet to ripple out. Amid rising political tensions, the country’s biggest union umbrella, the 700,000-strong Korean Confederation of Trade Unions (KCTU), has called for a one-day general strike February 25.

About 15,000 unionists, or about 45 percent of the workforce, of Korea Railroad Corp. (Korail) walked off the job December 9 to protest what they saw as a preliminary step to privatizing rail service—a plan by management to spin off the most lucrative slice of its business.

The corporation hired an army of scabs from its rail engineer school and other pools. Train services ran at 78 percent of normal capacity, according to Korail. However, on December 16, a 78-year-old woman was killed in an accident caused by a scab’s mistake.

Korail said it would dismiss 4,213 unionists and filed a damages lawsuit against 194 union leaders. A court issued arrest warrants for 10 union leaders for obstruction of business operations. On December 17, the police raided the union’s offices nationwide.

The government’s imprudence was broadcast live on December 22, when some TV networks interrupted their regular programming to show 4,000 riot police sealing off a Seoul building leased by the KCTU and a small independent newspaper.

Following on flimsy intelligence, hundreds of riot police sledgehammered their way into the 18-story building and conducted a 10-hour, door-to-door, warrantless search for the strike leaders. The riot police left empty-handed—though some police officers stole packs of coffee from the union.

Meanwhile, thousands of ordinary citizens had begun to surround the police. They circled the building, denouncing the government’s illegal crackdown.

The massive raid on the KCTU prompted the Korail union leaders to publicly seek sanctuary in a Buddhist temple in central Seoul. Donations poured in to the union and to the temple where the leaders were encamped.

After the botched raid, the KCTU called for a general strike February 25. The other union federation, the Federation of Korean Trade Unions (FKTU), often considered conservative for its regular dialogue channel with the government and with business lobbies, said it would discontinue dialogue with the government.

According to a poll commissioned December 30 by the conservative daily Joong Ang Il Bo, more than 60 percent of young people in their 20s and 30s supported the strike—highlighting a shift in the political mood.

Korail union leaders decided to end the strike December 30, after two major political parties agreed to form an ad hoc committee in the National Assembly to study the feasibility of rail privatization.

But the compromise did not suspend the spinoff plan; Korail management was not party to it. Korail is now seeking an injunction to seize the assets of the union and its leaders as part of its 11.6 billion won ($10.8 million) damages suit. Korail remains silent as to whether it will actually fire all the 4,123 unionists it had earlier said it would. Management has summoned 256 unionists to a penalty commission, a routine step toward dismissal.

The prosecution has requested arrest and detention warrants for eight union leaders who had already turned themselves in to the police after the strike. The court has rejected arrest-warrant requests for three other unionists.

The Korail unionists put down their tools again in 2003 when the government of Roh Moo-hyun, a respected human rights lawyer, attempted to push through a two-tier pension system and privatization of some Korail operations.

In 2006, Korail fired hundreds of onboard attendants of high-speed KTX trains who staged a strike demanding full-time status. In 2008, the court ordered Korail to reinstate them. To date, Korail has not complied.

But all these previous attempts at privatization pale, in boldness and absurdity, compared with the current government’s maneuver. Korail’s debt has recently ballooned to 17 trillion won ($15 billion) because of its ill-fated real-estate and light-rail projects. Yet the government approved Korail’s plan to spin off the Suseo section of its high-speed KTX.

The section is one of the few moneymaking areas of Korail’s publicly subsidized operations, because it caters to the upscale bedroom community of Suseo and the posh southern section of Seoul. Just as an incompetent CEO would attempt to inflate profits by selling off a cash-cow business unit, the South Korean government and Korail management have been attempting to cover up their financial imprudence by selling rail services in pieces.

The spinoff is evidently meant to be a precursor to broader privatization.

The Korail strike escalated political and economic tensions that have been simmering inside the government of Park Geun-hye, daughter of the late military strongman Park Chung-hee, who took office a year ago.

Park won the election by a thin 3.5 percent margin, and her victory is now widely believed to have been assisted by the country’s military and government intelligence agencies, which fielded 1.2 million messages on Twitter to sway public opinion in Park’s favor. Many other irregularities have yet to be uncovered.

Though it’s seldom reported in the global media, tens of thousands of South Koreans have been holding weekend rallies since spring, protesting the intelligence agencies’ meddling in presidential elections.

On December 28, in the middle of the rail workers’ strike and after the police raid on the KCTU, about 100,000 protesters rallied to support the strike and to call for an independent investigation into the government’s electoral irregularities.

The Park government, which is facing likely budgetary shortfalls, does not want to tax the rich or raise taxes on corporations. Instead it plans to sell off such public services as water, health care, public housing construction, and railroad transport.

The Korail strike put a temporary crimp in these maneuvers.

The railroad strike enjoyed widespread support because many South Koreans believed the Park government’s attack on the Korail union was an attack on democracy and basic public services. With no clear victory on the government’s or the union’s side, the standoff will continue.

Current and former KCTU leaders began a hunger strike January 2, ahead of the general strike planned for February 25.

In the run-up leading to the general strike, the KCTU and its locals will organize a series of rallies and work stoppages. The confederation will hold rallies in all major cities January 9 and 16, and on January 11 will join an ongoing weekend rally protesting the security agencies’ electoral irregularities and the crackdown on the rail strike.

Today, Hyundai Motor unionists refused overtime for an hour, to demonstrate support for the planned general strike. The slogan for the general strike will be “No political power can defeat the people.”

Kap Seol is a freelance journalist based in New York.

Related
This Year I’m Thankful for the Revolt Against Two-Tier »
'We'll Never Be in This Position Again': Striking Deere Workers Hold Out for Better Deal »
Teachers Strike against a ‘Heartless’ School Board in Biden’s Hometown »
Viewpoint: Building Trade Unions Won’t Win Our Parking Fights Until We Catch the Striketober Spirit »
‘It Feels Like We Started a Movement’: Despite Mixed Results in Frito-Lay Strike, Workers Proud They Stood Up »