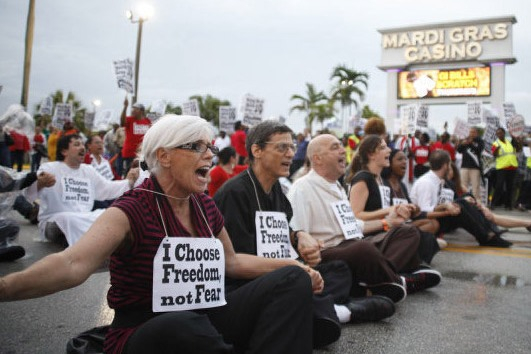 Ironically, the employer broke the neutrality agreement that’s at issue in today's Supreme Court case testing whether such agreements are employer bribes. “Neutral” Mardi Gras Gaming fired 10 employees for their union activism—which led to a rally of hundreds and arrests of 26.

Today the Supreme Court will hear arguments on whether "neutrality agreements," where the employer promises not to fight the union, are really just a bribe, and therefore illegal.

As the legal system keeps choking organizing possibilities, it’s now a rare campaign in the private sector where the union doesn’t first extract a neutrality agreement to blunt the boss’s wrath.

Neutrality agreements create rules for union and employer behavior during organizing drives. Often an employer signs such an agreement only after years of targeted union pressure. The employer promises not to try to sway workers’ opinions, allowing them some breathing room when labor law is mostly on management’s side.

Such a deal may also include “card check” (the employer will recognize the union if a majority of workers say they want one) or improved rules for an NLRB-supervised vote, such as a quicker election.

While some agreements have come under fire for giving away too much to the employer, they’ve become the go-to tactic for hotel workers (UNITE HERE), Service Employees, and National Nurses United. In September the Auto Workers collected cards from a majority of workers at a Chattanooga, Tennessee, plant under a recognition agreement with Volkswagen.

Hyatt hotels and UNITE HERE recently signed a contract after a four-year campaign of workplace disruptions, rallies, pickets, short strikes, and a global boycott of the brand joined by hotel workers overseas. The most contentious issue was neutrality for new organizing. The contract the union finally won in July provides for card check at several unorganized Hyatts that the company both owns and operates.

The agreement has yet to prove itself, and hotel workers are keeping the heat on and pushing the envelope. In August they launched a boycott of two Seattle Hyatts whose local owner is refusing to permit card check.

Knowing that Hyatt might shrug off the agreement even in hotels it owns and operates, UNITE HERE reserved the right to strike in a year if the company continues to fight organizing.

If the Supreme Court outlaws neutrality agreements, it will give Hyatt and many other employers a reason to renege on unions’ hard-won pacts.

The case the Supreme Court will hear involves a South Florida greyhound track, now known as Mardi Gras Gaming, where UNITE HERE reached an agreement with the employer in 2004. The company would allow union representatives to speak to workers in non-work areas during non-work times and would provide the union with contact information for employees. It would also “remain neutral” about unionization.

In return, the union promised to lobby for a statewide ballot initiative that would allow two south Florida counties to permit slot machines at existing betting facilities. (The union spent $100,000 supporting the initiative, which squeaked by with 50.83 percent of the vote.) And, the union said, once it represented the workers, they wouldn’t strike, boycott, or picket.

While the promise not to strike might raise eyebrows among unionists, that is not at issue in the case. A worker at the company, Martin Mulhall, got help from the National Right to Work Foundation to sue the employer and the union, jointly, for violating a clause in the 1947 Taft-Hartley law that says an employer can’t provide a union any “thing of value.”

The paragraph is designed to keep employers from bribing unions with money, jobs, loans, or other inducements, said Massachusetts labor lawyer Robert Schwartz.

“No employer would think to bribe a union by making it easier for the union to organize,” noted UNITE HERE in a press release.

But judges on an 11th Circuit panel voted 2 to 1 that “organizing assistance can be a thing of value.” UNITE HERE appealed to the Supreme Court.

Other circuit courts have found neutrality agreements legal and called claims to the contrary far-fetched. If neutrality is a “thing of value,” a district court judge wondered in 2006, what about provisions in a contract that are favorable to the union?

“If the Court were to find that participation in card-check agreements was illegal, it would have the effect of criminalizing all collective bargaining agreements,” the judge wrote.

The Supreme Court might have decided to consider the case because the justices think the lower court’s decision is “a grievous mistake,” said Schwartz, “but there’s always the concern that they’ll uphold the circuit court.”

Companies often don’t honor the neutrality agreements they sign. In one notorious case, the Communications Workers won an agreement for Verizon Wireless workers after a strike in 2000. The company promptly violated it, even closing shops and moving them south to evade its pledge.

And in 46 percent of neutrality agreements examined in a 2001 study, the company still fired union supporters.

Still, neutrality agreements are quite successful for unions compared to traditional National Labor Relations Board elections, especially if they also provide for card check, according to a study by Adrienne Eaton and Jill Kriesky.

During a period when unions won only 46 percent of private sector elections, the campaigns they studied that used card check and neutrality won 78 percent of the time.

The point is to avoid the drawn-out Labor Board election process, which gives managers weeks or months to threaten and bully the workforce into a “no” vote. Researcher Kate Bronfenbrenner found that firings occurred in 34 percent of campaigns, supervisors interrogated workers one-on-one in 63 percent, and supervisors threatened workers individually in 54 percent.

The threats and firings violate labor law, but lengthy court proceedings, with multiple chances for the employer to appeal, make it hard to keep momentum in an organizing drive while the employer wears down the workforce.

Neutrality agreements have become more important as the courts have whittled away organizing rights.

In 1992, the Supreme Court decided that employers don’t have to give union organizers access to private property, even a parking lot, if there’s any other reasonable way to reach workers. Only the company’s own employees can have access. (There is some wiggle room if the company allows charities or others on the property.)

Walmart has been using this rule to chase supporters of worker organizing out of stores, and to prevent employees it has fired from returning. Last fall, managers called the police on Alex Rivera, a fired worker who was trying to talk to former co-workers in an Orlando store as part of the OUR Walmart campaign.

In the neutrality agreement before the court, Mardi Gras Gaming agreed that Local 355 organizers would have access to workers at their jobsite, giving organizers the same chance to talk to workers that they had before 1992.

While the case crawls its way through the courts, the 200 servers, bartenders, slot machine attendants, and housekeepers have had a fight on their hands.

After the ballot initiative passed, the company added card tables and slot machines, but cut wages. Then it fired ten workers from the Local 355 organizing committee who signed a flyer, said Jay Mehta, who works for the local.

Two clergy members who tried to meet with management on the workers’ behalf were cursed and thrown off the property. Hundreds have rallied and 26 were arrested for civil disobedience last year. The workers keep winning cases at the Labor Board but the company keeps appealing.

Still, the local has won victories at three other South Florida casinos that also signed neutrality agreements. The companies agreed to binding arbitration, too, so contracts are expected soon.

A version of this article appeared in Labor Notes #415, October 2013. Don't miss an issue, subscribe today.