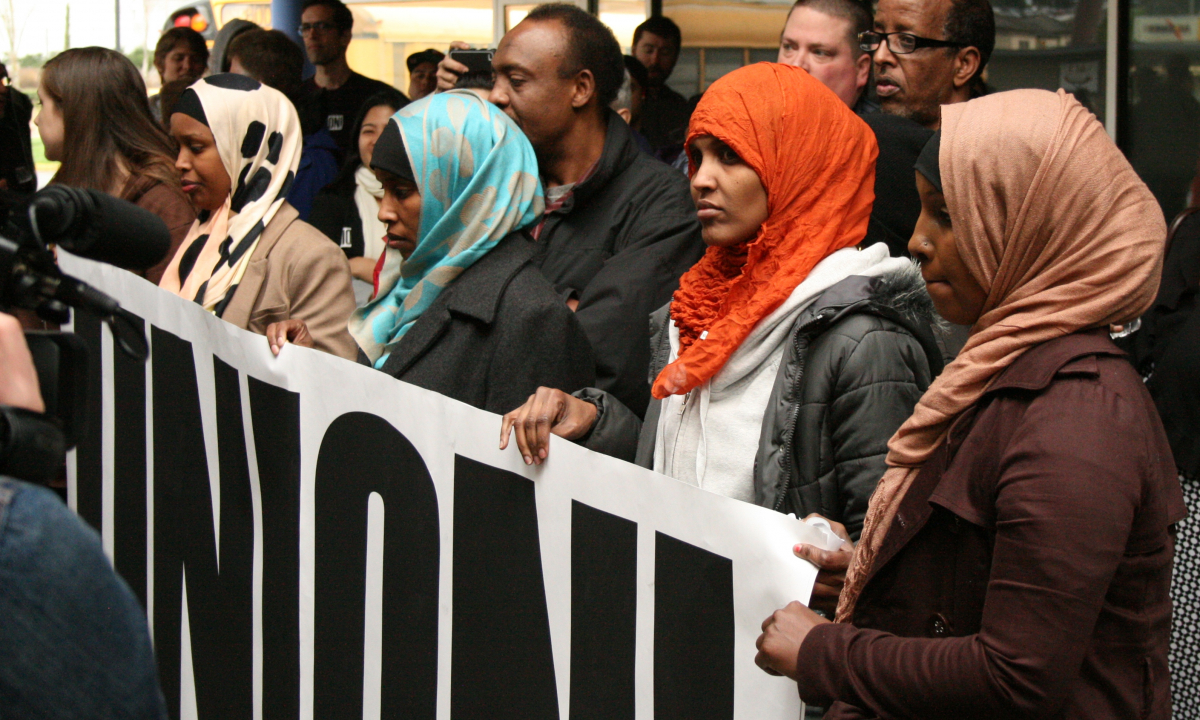 Seattle-Tacoma airport workers marched to their employer’s offices this summer with a “UNION!” banner, demanding recognition of SEIU Local 6. Sea-Tac cabin cleaners, baggage handlers, and others organized for recognition at the same time that they pursued a citywide vote for a $15 minimum wage. Photo: Working Washington.

Alex Hoopes was making $21 an hour in 2005 as a unionized Alaska Airlines baggage handler at the Seattle-Tacoma Airport. In 2013, he was doing the same job for $9.50, just 31 cents above Washington’s minimum wage.

Hoopes’ plunging pay is not unusual among airport workers. A recent study found average wages for baggage handlers have declined by a whopping 45 percent in 10 years.

“We don’t have an expectation that contracting out is going to change,” said Sage Wilson of Working Washington, a coalition funded mostly by the Service Employees (SEIU). “So what is to be done about that?”

The answer is that unions have been fighting for—and slowly winning—higher minimum wages at airports. On November 5, voters narrowly approved a $15 minimum wage at Sea-Tac airport and in the surrounding small town (votes were still being counted at press time).

Philadelphia airport workers are organizing for a similar win there. Living wage ordinances in Miami and Syracuse, New York, cover workers at their airports, though the pay is nowhere near $15.

At Sea-Tac, Alaska Airlines was first in line to oppose the raise, suing to keep it off the ballot and spending substantially. Half the airline’s flights go through Sea-Tac. Alaska was joined by employer associations for restaurants, hotels, and rental car companies, and even the oil tycoon Koch brothers.

The New York legislature instituted a small raise in March, increasing the state minimum in three steps from $7.25 to $9 by the beginning of 2016. (Tipped workers were left out.) California established a three-step raise to $10 by 2016.

Several states are expecting to vote on increased minimums in 2014, according to the National Employment Law Project, including Alaska, Hawaii, Idaho, Illinois, Maryland, Massachusetts, Minnesota, and South Dakota, where advocates just announced they’d collected enough signatures to get a $1.25 raise on the ballot.

And the U.S. Senate is contemplating a bill to raise the national minimum from $7.25 to $10.10 by 2015, lately with President Obama’s support. Obama had previously suggested a $9 minimum, reached gradually.

The Senate bill, introduced by Iowa Senator Tom Harkin, would also increase the minimum for tipped workers, frozen at $2.13 since 1991, to 70 percent of the regular minimum, and index everything to inflation with automatic annual adjustments. The bill is not expected to progress in the House.

New Jersey’s 1992 minimum-wage raise made possible a famous study showing that— contrary to most economics textbooks—raising the wage did not cause layoffs.

Two economists, David Card and Alan Krueger, compared low-wage employment in New Jersey to that in workplaces across the Delaware River in Pennsylvania, where the minimum stayed the same. Not only were no jobs lost in Jersey, this study and subsequent ones found that employment may have slightly increased—probably because low-wage workers had more money to spend at local businesses.

Still, opponents like Governor Chris Christie continue to insist that any increase will cost jobs.

After Christie vetoed a $1.25 raise, unions and other groups spent $1.3 million—compared to opponents’ $1 million—on a ballot measure. It passed with 61 percent in November, putting a $1 raise in the minimum wage, indexed to inflation, into New Jersey’s constitution.

The “Yes” campaign outspent them, though, led by the Service Employees and the Teamsters. Both unions represent workers at the airport: food, retail, and rental car workers and airport maintenance. Majorities at two major subcontractors, DGS and Menzies Aviation, have marched on their bosses asking for recognition, too.

The working class town of SeaTac, with around 30,000 residents, saw intense canvassing by both sides. Many airport union workers threw themselves into the campaign, said Wilson, registering their co-workers to vote and knocking on doors.

The expected raise will cover transportation and hospitality workers at the airport and in the city, including those who fuel jets, move baggage, and work for rental car companies, hotels, and restaurants. Fast food workers at the airport’s Wendy’s, McDonald’s, and Burger King will be covered.

The SeaTac raise-by-ballot is one visible effect of the fast food workers’ “Fight for $15” campaign, also an SEIU project, which resulted in short strikes in 58 cities in August, including in nearby Seattle. The strikes “shifted expectations in a serious way,” said Wilson.

But even before fast food, SEIU had been pushing minimum wage campaigns as part of its three-year-old national “Fight for a Fair Economy” program, which has floundered in some places but gained traction in airports.

SEIU has also charged the federal government with being the nation’s largest low-wage employer—two million people work at low wages for companies under federal contracts. The union is pressing President Obama to sign an executive order to require a living wage for these workers, who do jobs like sewing military uniforms or serving food in Smithsonian museums.

A study by Demos noted that if federal contractors’ CEO pay were capped at $230,000—Vice President Joe Biden’s salary—their low-wage workers could get a $6.69 per hour raise. Under current law, the federal government blithely pays salaries as high as $763,039 apiece to contractor managers.

Other unions have also tried to win at the ballot box what they can’t in bargaining. Last November the Hotel Employees (UNITE HERE) got voters to approve a higher minimum and paid sick days for non-union hotel workers in Long Beach, California. Workers at large airport hotels in nearby Los Angeles won an $11.95 minimum in 2007.

The Food and Commercial Workers have been using a similar angle to stop the Walmartization of grocery jobs. Most recently UFCW backed an ordinance to force big Washington, D.C., retailers to pay $12.50 an hour (including benefits). That had strong city council support, but was vetoed by the mayor in September.

None of the smaller raises now contemplated by states and cities (see box) will substantially change the living conditions of low-wage workers. Anthony Goytia, who went on strike for a day in November along with other L.A.-area Walmart workers, said, “I don’t so much live paycheck to paycheck as payday loan to payday loan.”

That’s why the success in reaching $15 at airports—a significant bump—is encouraging.

Airports are a particularly ripe target because they are often owned by cities. “They’re the result of really large amounts of public investment over the years,” said Wilson. Elected city council members are more subject to public pressure than, say, the board of Walmart.

Airports also have relatively affluent customers who can’t take their business elsewhere, and businesses compete for access to them.

At the same time, Weiner said, organizing airport contractors is difficult. “Every job has been contracted to [a company that] can easily be replaced if they increase their rates,” she said. A higher wage floor applying to all contractors neutralizes this threat.

In fact, owners of unionized contractors at Sea-Tac were silent on the minimum wage law, organizers said—probably because if it won, their competitors would no longer be able to undercut them by depressing wages.

Direct employees of airlines, like flight attendants and pilots, are excluded from local living wage laws, because interstate carriers can’t be regulated by states or cities. But airlines’ rampant contracting out means just about all their ground crew jobs, from cleaning planes to moving baggage, are covered by the airport laws.

Even most union employees at Sea-Tac will benefit from the $15 minimum, said Weiner. Raises will affect roughly 6,500 workers, 1,500 of them in unions: Teamsters at Hertz Rent-a-Car, UFCW members at retailer Hudson News, UNITE HERE members at HMS Host food concessions, and SEIU members who clean and maintain the airport.

The SeaTac measure exempts workers with a collective bargaining agreement, which opponents have characterized as “forcing unionization,” but this loophole is hardly a magic bullet that will convince your boss to recognize a union, say organizers.

“There has not been a mad rush to unionization” after the California airports raised their pay, said Weiner. “Organizing is still hard work.”

Even if union workers agree to lower pay in their contract, they’re likely to demand something in return, like paid sick days, vacation, or health benefits.

Before the SeaTac ballot counting was complete, employer groups resubmitted a lawsuit to federal court, with an Alaska Airlines spokesperson calling the proposition “a union contract imposed through legislation.”

Along with the raise, workers won 6.5 paid sick days a year (which an opposition spokesperson called “essentially, a week’s vacation”).

Employers will also have to offer more hours to their part-timers before hiring more workers.

And, hotel workers who have their tips stolen will be able to sue to get them back. SeaTac hotel workers report rampant tip theft. Housekeepers say managers take tips from the rooms before they clean them. Banquet servers and room service attendants say they never see their part of the “service charge” that customers think will go to workers. “Tip integrity” was also part of the Long Beach ordinance passed last year.

Now Seattle employers fear the $15 minimum may spread to their town. There, both mayoral candidates in November’s election advocated a $15 city minimum. They were swayed by the popularity of a socialist candidate for city council, Kshama Sawant, who made $15 her key plank. She appears to have narrowly defeated her opponent as votes continue to be counted in Washington’s mail-in balloting.

Wilson said the fast food strikes, which first hit Seattle only in May, changed the scene there. “It’s hard to believe that six months later, $15 is on the ballot and became a central question in local elections in Seattle,” said Wilson. “Workers taking action is what made that happen.”