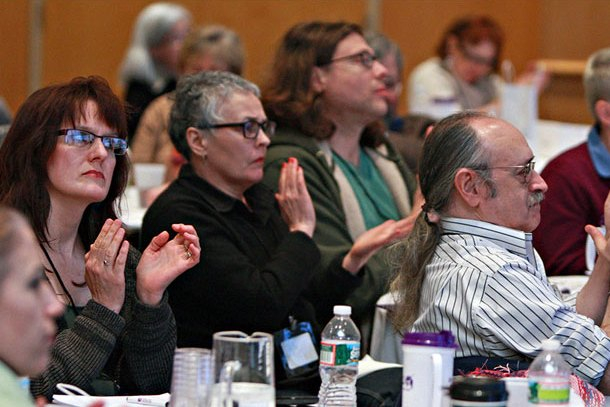 When adjunct faculty at Georgetown University swept their union election May 3 with 72 percent voting yes, it marked a local tipping point: Service Employees Local 500 now represents a majority of adjuncts at private colleges in the Washington, D.C. area.

The spread of adjunct unions in D.C., where faculty self-organized at four colleges, inspired SEIU to launch a citywide, cross-college organizing strategy in Boston. Seattle may be next. The Steelworkers are doing the same in Pittsburgh.

In many industries, your typical union event is a march or a rally, but in the academic world, folks like a good symposium. Both unions held conferences on contingent faculty organizing in April.

Tuition continues to climb, but not because of faculty pay. At some D.C. universities, according to SEIU, an incredible 4 percent of the budget goes to instruction.

Instead, in public institutions, rising tuitions are filling the gap left by declining state support. In all types of schools, tuition is also spent on increasing salaries for the expanding ranks of administrators. The number of non-faculty professionals—think tech support, admissions, athletics, and fundraising staff, for instance—more than tripled 1976 to 2001, The Nation reported. Money also goes to fancy buildings, new technology, and other campus amenities to compete for students.

“If you take as your model the typical Wall Street bank, the people who make the most money are the people who do the least work,” said adjunct Kurt Brandhorst, “and I’m afraid that’s how most American universities are going.”

Higher education—even at for-profits like the University of Phoenix, the country’s largest university—is mostly publicly funded, through federal grants and loans.

Though elite schools get the media attention, “the majority of people in higher ed today are working-class people, as students and as teachers,” said contingent faculty activist Joe Berry.

SEIU’s Boston event drew workers from at least 20 colleges, including a majority of the area’s large institutions. Boston is home to 13,000 contingent faculty.

At the Pittsburgh event, said veteran organizer Joe Berry, “I think I saw two or three organizing committees form before my eyes.”

Adjuncts, also known as contingent faculty, teach on a contract basis, often booked one semester at a time. It's hard to count them precisely, since the lines between different kinds of academic jobs aren't always clean, but contingent faculty—including part-timers, non-tenure track full-timers, and graduate assistants—number well over a million and now make up 75 percent of higher ed faculty. Part-timers alone are 762,000, or just over half, at last count. One advocacy group is aptly named the New Faculty Majority.

Said Berry, author of Reclaiming the Ivory Tower: Organizing Adjuncts to Change Higher Education, “They could shut down the universities with a credible strike threat, because they teach most of the classes.”

Staffing at universities is an extreme two-tier scenario. In many institutions, the average tenure-track faculty member makes two, three, or even four times per course what an adjunct does, said Anne McLeer, a former adjunct now in charge of SEIU 500’s higher ed campaigns.

Many adjuncts make $2,000 to $3,000 per course, with no benefits. (Eight courses per year would keep you very busy.) Some get food stamps.

But with tenure-track positions fast evaporating, the contingent life is the likeliest path for new grads who dreamed of becoming professors.

It’s been a dramatic slide, even compared with other industries. “Almost no place have you seen a job that was as good as a professor job completely casualized in the space of a single generation,” Berry said.

Adjunct work is not only poorly paid but unstable. D.C.-area adjunct Kurt Brandhorst said he’s been asked to teach a course two days after the semester began—not unusual in adjunct world. “You need it, you take it,” he said. “Semester-to-semester contracts are a nightmare to live by.”

A recent report from New Faculty Majority and the Campaign for the Future of Higher Education coalition calls this “just-in-time employment”—and points out it’s not good for students either. Educators booked at the last minute won’t have had time to plan lectures and readings. Sometimes they are not even provided the use of a photocopier or office space to meet with students.

Some adjuncts are just teaching one course as a side job to their regular career, but those whose vocation is teaching are mostly “freeway flyers,” piecing together a living from part-time jobs at several colleges (and sometimes online).

“I’m as pleased as Punch” that someone is finally doing it, he said.

Citywide bargaining could create a more stable work life for adjuncts, perhaps with centralized job posting and something like a union hiring hall.

The idea might be, “If I lose a course at George Washington, am I next in line to get a course at Catholic University?” McLeer said.

Local 500 has already improved job security in its contracts. For instance, at Montgomery College in Maryland, if you’ve taught four semesters in three years you can be denied reassignment only with a good-faith reason (such as downsizing or poor performance), and after you teach seven of 10 semesters you can apply for an annual appointment with a guaranteed course load.

The goal of a citywide coalition would be to push benefits and pay closer to full-timers’—ultimately making adjuncts not so much cheaper than permanent faculty. McLeer hopes this would push universities to abandon the contingent model and hire former adjuncts into stable positions.

In that case, maybe they couldn’t be in her union anymore: the Labor Board considers full-time faculty in private institutions to be management. But there’s no shortage of adjuncts to organize.

“There’s the community colleges, the for-profit institutions,” McLeer said. “From the beginning this has been about creating a movement.”

Joint bargaining is the goal, but in the short term, the unions are still running representation campaigns school by school. The first of the Boston schools, Bentley University, filed for an authorization election May 9.

When a colleague told him about the symposium, "I thought, 'Well, it’s about time,'" said Doug Kierdorf, a medieval historian teaching at Bentley. He showed up, became part of the "de facto" organizing committee, and was astonished how quickly the process moved.

The election at Bentley will likely be held in the fall, since many adjuncts disperse for the summer. "You scramble for work wherever you can," said Kierdorf, who will spend a week grading history exams in Missouri, among other gigs.

Ironically, Brandhorst had time to play a bigger role in organizing at Georgetown after his teaching gig at another college fell through.

Organizers sent him a list of names, and he emailed colleagues to ask to talk about the union.

Often he was meeting them for the first time. Adjuncts typically don’t know their fellow workers: how would they? “I met more people through the organizing campaign in the last two months than I met in the entire year I was teaching at Georgetown,” Brandhorst said.

Some could never be tracked down. On the authorization petition, the union shot for the legally required 30 percent to file for an election—not the super-majority organizers usually insist on. But Georgetown lived up to its promise to remain neutral.

His message of solidarity “moved some people you wouldn’t expect it to move,” Brandhorst said. “You’re surprised when the retired army officer from Special Forces says yes.”

In the fall, though, Brandhorst won’t be a member of the union he helped form at Georgetown. His next job is at a public university in Virginia—where public employees are legally barred from collective bargaining.