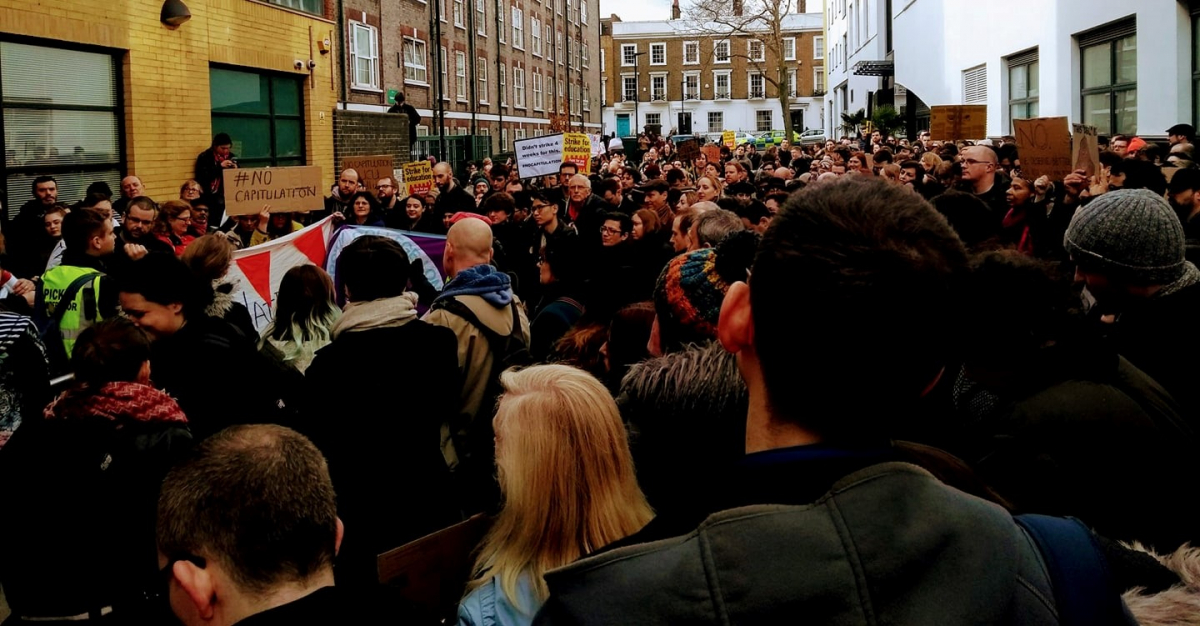 “No capitulation!” That slogan sped around social media and appeared on picket lines Tuesday morning, after 42,000 academics and academic support staff at more than 60 British universities rejected a deal negotiated by their union that would have brought their 11-day strike to an end.

The strike will now continue until March 16, when most universities shut down for four weeks over the Easter break. It may well resume when teaching begins again in mid-April.

As soon as the deal was published online last night, University and College Union members took to social media to reject it. A document demanding rejection circulated and soon attracted 9,000 signatures. Branch presidents and the Higher Education Committee, the union body responsible for accepting or rejecting a deal, received enormous volumes of emails (sadly, including some abuse) demanding rejection. Some UCU branches voted to reject the deal that very evening.

When strikers returned to the picket lines Tuesday morning, they had a new slogan and hashtag: #NoCapitulation. The Higher Education Committee rejected the agreement at its meeting that afternoon. This means the strike will continue until the end of the week, when the Easter break begins.

The strike began on February 22 as a dispute over pensions. Universities UK (UUK), representing university managers, proposed changing the University Superannuation Scheme (USS), a pension plan that covers academics and some support staff at 68 universities, from a defined-benefit to a defined-contribution scheme.

The UCU, representing affected staff, rejected that demand and balloted its members for strike action, 14 days staggered over four weeks, if the proposed changes were not withdrawn. They were not. UCU members at 61 of the 68 affected universities met the high threshold for strike action imposed on unions by recent Conservative legislation. Three others joined them after successful second ballots.

Old hands in the UCU have marvelled at the unprecedented numbers of members present, day after day, on the picket lines. In past disputes, as one commented at Loughborough University, the picket line consisted of little more than half the branch committee. Now dozens of people arrive each day, in unseasonable weather, to take turns leafleting cars and pedestrians, or to talk with their colleagues about the dispute.

Students supported their teachers and other striking staff from the beginning. They have stayed on the picket line, rain, sun or blizzard, to lend their support. They have occupied buildings, including part of the vice-chancellor’s suite at Leicester University, and the headquarters of Universities UK in London.

University managers have wavered in their response to the strike. Numerous vice-chancellors have qualified their initial support of proposed cuts to pensions. That list now includes the heads of Cambridge, Oxford, and many other elite institutions.

Their wavering had practical results. On February 27, the strike's fourth day, union and management agreed to arbitration. The strike went on as they met. The result was the March 12 provisional agreement.

As part of the agreement, the universities agreed to maintain the defined-benefits plan for a three-year transitional period, with an independent re-valuation of the future of the USS fund. Both were union demands that the employers had previously refused to consider.

But the deal was in other respects a large step backward. The “transitional” nature of the agreement implied that further unwanted changes would take place at the end of the period. At best, the UCU would be dragged into another dispute in three years’ time.

Other aspects of the deal would make that dispute harder to win. In return for a temporary halt to their larger transformation of the USS plan, management negotiators insisted on a drop in the salary threshold and a drop in the accrual rate. Benefit increases would be capped at the rate of inflation up to 2.5 percent—an inflation rate currently exceeded in the UK. They also raised the level of employer and employee contributions to the fund. Translated into English, this would mean that benefits for future retirees would fall, even as their contributions would rise.

Insult followed injury. According to the agreement, UCU members would lose pay for strike days; yet the UCU promised to “encourage its members to prioritise the rescheduling of teaching in order to minimise the disruption to students.” This promise of unpaid, retroactive strikebreaking angered UCU members as much as the pension changes, which few outside the pensions industry fully understand.

The UCU has already suggested a further 14 days of strike action after the break, and a grading boycott to follow. That would extend the strike until the end of the academic year. It’s difficult to determine whether enough UCU members can stomach further industrial action, or whether they will retain student support during that time.

The other unknown variable is management. Will enough university managers convince their representatives to shelve drastic changes to pensions, or will they dig in their heels? The answer will determine whether UCU members see the next offer as capitulation or victory.

Related
This Year I’m Thankful for the Revolt Against Two-Tier »
'We'll Never Be in This Position Again': Striking Deere Workers Hold Out for Better Deal »
Teachers Strike against a ‘Heartless’ School Board in Biden’s Hometown »
Viewpoint: Building Trade Unions Won’t Win Our Parking Fights Until We Catch the Striketober Spirit »
As Strike Looms, UC Lecturers Raise the Stakes »