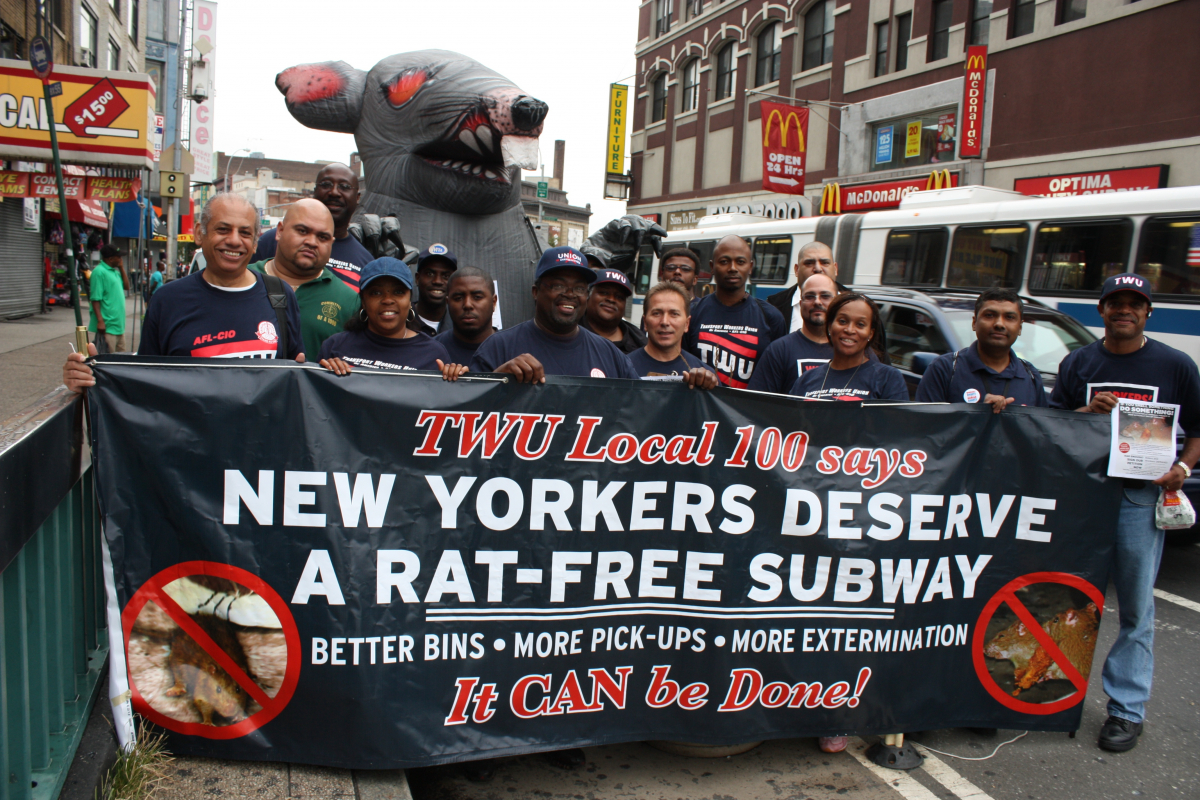 Rats ruled the subways in New York City until the union and the riders embarrassed management into cleaning up. Photo: TWU.

New York City transit workers are allying with bus and subway riders for better conditions. First in a two-part series.

As any seasoned organizer knows, the public can be fickle. But a year ago Transport Workers Local 100 in New York stumbled upon an enemy so scary, it would unite subway riders and workers in action to overcome a clear and present danger.

This scourge of the transit system was infecting every corner, rapidly growing in size and number, and making life miserable for workers and riders alike: none other than the New York City Subway Rat.

Local 100’s administration, headed by President John Samuelsen, had run on a reform program, promising to rebuild steward networks and form coalitions with the riding public. The local’s newly trained stewards began filing field reports that rats were infesting the system to a degree previously unseen.

The rats were on platforms, in crew quarters, crawling in subway towers, and occasionally riding the trains. YouTube was flooded with videos of subway rats and shrieking riders.

A little research revealed that the Metropolitan Transportation Authority (MTA) had stopped sending out baiting crews around 2006. Rats had the run of the place.

At the urging of stewards in the cleaners’ section of the union, the local’s safety department focused its efforts on the most infested station in the system, Parsons Archer in Queens. Officers had already pushed supervisors to take action. Grievances had been filed, and union officers and the safety committee had visited the site multiple times. Yet the rats continued to rule the roost as the garbage piled up and sat for days.

Frustrated with the slow pace of progress, the union decided to launch a public campaign: New Yorkers Deserve a Rat-Free Subway.

Politicians, community groups, and local businesses signed on. Remixing a union standby, Local 100 blew up its union rat-balloon in front of the Parsons Archer station and unveiled a banner claiming New Yorkers’ right to a vermin-free commute.

A hundred members, officers, and staff surrounded the station entrance chanting, “Budget cuts means rats are back” and “You don’t want to ride with them and we don’t want to work with them!” They asked passengers to sign a petition calling for a system-wide rat eradication plan. Over 3,000 signed.

The campaign gained momentum as more and more members came out for “Rat Hits” at stations all over the city. Previously silent politicians appeared at rallies, decrying a neglected system that needed to be cleaned up. A legislator brought the cause directly to the MTA’s executive director at his confirmation hearings in the state capital.

Regular email blasts from the union kept petition signers up to date. Other community groups used their connections to build momentum.

West Harlem Environmental Action (WE ACT) was a consistent partner in the fight against rats. Members conducted surveys in their local stations, bringing the cleanliness issue into the public eye. They convened a press conference with local politicians and organized their members to participate in rat hits, building connections between riders and workers.

After 10 to 15 rat hits, the New Yorkers Deserve a Rat-Free Subway campaign launched ratfreesubways.com and announced a photo contest. Riders were asked to submit pictures of “New York’s Ugliest Subway Rat.” The winner would get an unlimited monthly subway pass.

Submissions trickled in slowly at first, and we wondered whether the idea was a flop. Then the New York Post picked up the contest—leading to more than 250,000 hits on our website in one day and a local, national, and international media feeding frenzy. Every local station, CNN, ABC, and 17 international TV stations and newspapers picked up and ran the story of the photo contest.

Stewards were front and center in most of the press pieces, taking reporters into rat-infested crevices of the system to give them an embedded reporter’s view of the battlefield.

When we awarded the MetroCard to the contest winner—in front of the rat balloon, of course—more than 30 press outlets showed up. The battle against subway rats had hit the big time.

What has come of it all? The MTA budgeted an additional $1.6 million to run new garbage trains, creating 19 new jobs. Baiting crews are out in force for the first time in years, forcing the MTA to backfill track positions with new hires.

Parsons Archer, once the dirtiest station in the system, is now pristine. The garbage room is emptied daily and the members working there rarely see a rat. The MTA has gone on the defensive.

New Yorkers Deserve a Rat-Free Subway was about to mark its first year when superstorm Sandy hit.

Politicians and city leaders praised the transit workers who were out restoring service. Public perception was almost universally positive, a departure from the trend of potshots at public sector union workers.

The fruits of a year of public outreach were evident. Riders are learning they can count on Local 100 to keep up the fight for clean, safe, reliable public transportation.

Read about a second Local 100 campaign that united workers and riders here.