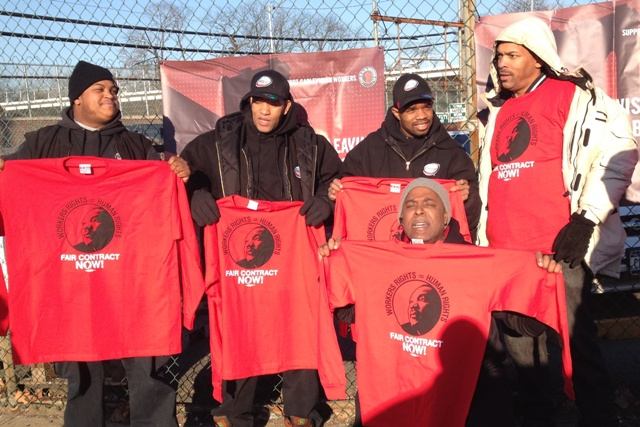 Update: Cablevision fired 23 technicians after a union action January 30. Workers, community allies, and mayoral candidates showed up on Cablevision's doorstep the next morning to protest the mass firing.

Brooklyn Cablevision workers marked Martin Luther King Day and the one-year anniversary of their new union—and one of the coldest days of the year—outside one of the company’s garages this morning.

It was about 14 degrees out, plus wind chill. So workers pulled on their bright red T-shirts—sporting a picture of Dr. King and the message “Workers Rights = Human Rights, Fair Contract Now!”—over their coats and work uniforms.

The technicians, who install and repair television, phone, and internet connections, voted to form a union a year ago. They are still bargaining for their first contract with a resistant employer.

Five-year employee Eric Ocasio isn’t surprised not to be finished yet.

“Everything is a struggle and effort. That’s just the name of the game,” he said. “Once they realize there’s no way the union is going to leave, they’ll have to settle down and agree to a contract with us.”

Workers from the Canarsie facility and other garages dropped by, alone and in small groups, hopping out of utility vans to pick up T-shirts and chat for a few minutes with Communications Workers (CWA) organizers.

Cablevision managers are clearly feeling the strain. Two came out to object—and even claimed they were calling the police—after organizers tacked up a couple of banners on the company’s fence. (Unsurprisingly, NYPD never showed up.) One sat in a car for awhile, apparently watching the action, but sped off when organizers approached to film him in the act of surveillance.

And when a vanful of trainees in their first week on the job showed up, manager Darryl Gaines charged toward them shouting, “Back in the van!”

The new workers jumped back into the vehicle and drove away as a flustered Gaines insisted, “Those guys belong to me.” A videographer caught Gaines on video.

‘Their End of the Bargain’

Top management appears to be on the defensive, too. Cablevision recently sued CWA for telling the public that the company’s Internet speed is slower in Brooklyn than elsewhere in the city.

Organizer Chris Calabrese said the union isn’t worried about the lawsuit, but is glad to have hard evidence the company is feeling the heat. “The fact that they would put it into writing that it really bothers them is a plus for us,” he said.

But Cablevision isn’t yet budging on key issues at the bargaining table.

Pay is a big one. A starting salary for Cablevision technicians is about $27,000, in one of the country’s costliest cities. Some employees rent rooms in shared apartments because they can’t afford to live on their own.

CWA members at Verizon and Time Warner do “basically the same work we do,” Ocasio said, “but they make a better living. We want to be treated the way they are.”

The union is pushing for a standard annual increase for everybody, rather than the “merit” raises supervisors give out now. Workers said these awards are based on favoritism and produce wide disparities.

“Look at today,” said Lawrence Hendrickson, a 10-year employee and bargaining team member. “It’s the coldest day of the year and these guys are going out to work. These guys go to work every day. They’re holding up their end of the bargain.”

Instead of listening to the union’s proposals, the company has spent the past year giving out big raises—as much as 20 percent, Brooklyn workers said—to their nonunion counterparts in other depots, including in the Bronx, where workers voted the union down after a campaign of intimidation last summer.

And the lawyer Cablevision is using for negotiations costs $1,000 an hour, organizer Calabrese said—so by now the company may have spent more to resist a wage increase than it would have cost to say yes.

What’s more important to the company than the money, Hendrickson said, is the absolute power managers are accustomed to wielding over their employees.

“They have the mentality of a snake eating its own tail,” he said. “They control everything within the circle here. If you don’t fit into their plan, they have to get rid of you.”

First contracts are notoriously tough to get, in part because management has an incentive to delay: if there’s no contract after a year, labor law allows workers to petition for a revote to boot the union out—something many bosses do their best to orchestrate. But support for a union appears stronger among Cablevision workers now than it was a year ago. Organizers say 200 signed a union petition in November. That’s a larger majority than voted for the union last year.

The union’s current strategy is to focus uncomfortable public attention on Cablevision and its CEO, James Dolan. They’ve taken actions at Radio City Music Hall and its parent Madison Square Garden Company, of which Dolan is chair. In December, workers leafleted outside a performance by Dolan’s vanity band, JD and the Straight Shot.

If that doesn’t work, Cablevision workers said they are willing to keep escalating their worksite actions too.

“The only thing some companies do understand is when you shut it down,” Hendrickson said. “We have to be prepared to go all the way.”

The Martin Luther King T-shirts highlighted an ongoing theme in the CWA campaign. Workers used the holiday to push back against anti-union pressure as their union authorization vote neared last year.

Most Cablevision employees in Brooklyn are black. In captive-audience meetings, they pointed out King’s strong support for unions. Workers put white supervisors on the hot seat, asking, “Was Dr. King wrong and you’re right, or was Dr. King right and you’re wrong?” said organizer Tim Dubnau.

Coincidentally or not, Hendrickson’s supervisor had chosen today to take employees out for an appreciation breakfast at a nearby diner.

“I’m gonna tell him, ‘Thanks for the eggs and bacon,’” Hendrickson said, “‘but at the end of the day, what I really want is a contract.’”

Alexandra Bradbury is the editor of Labor Notes.al@labornotes.org
Related
A Life in Transit: ‘What You Can Get Is Set by How Far You Are Prepared to Go’ »
When Workers Swapped Segregation for Solidarity »
Mike Parker: A Labor Educator with Impact »
Two Thousand California CWA Members Strike Telecoms Corp Frontier Communications »
Chicago Passes Union-Backed Bill for Civilian Oversight of Violent Cops »