In a Year of Politicians and Bad News, Surprising Stories of Resistance 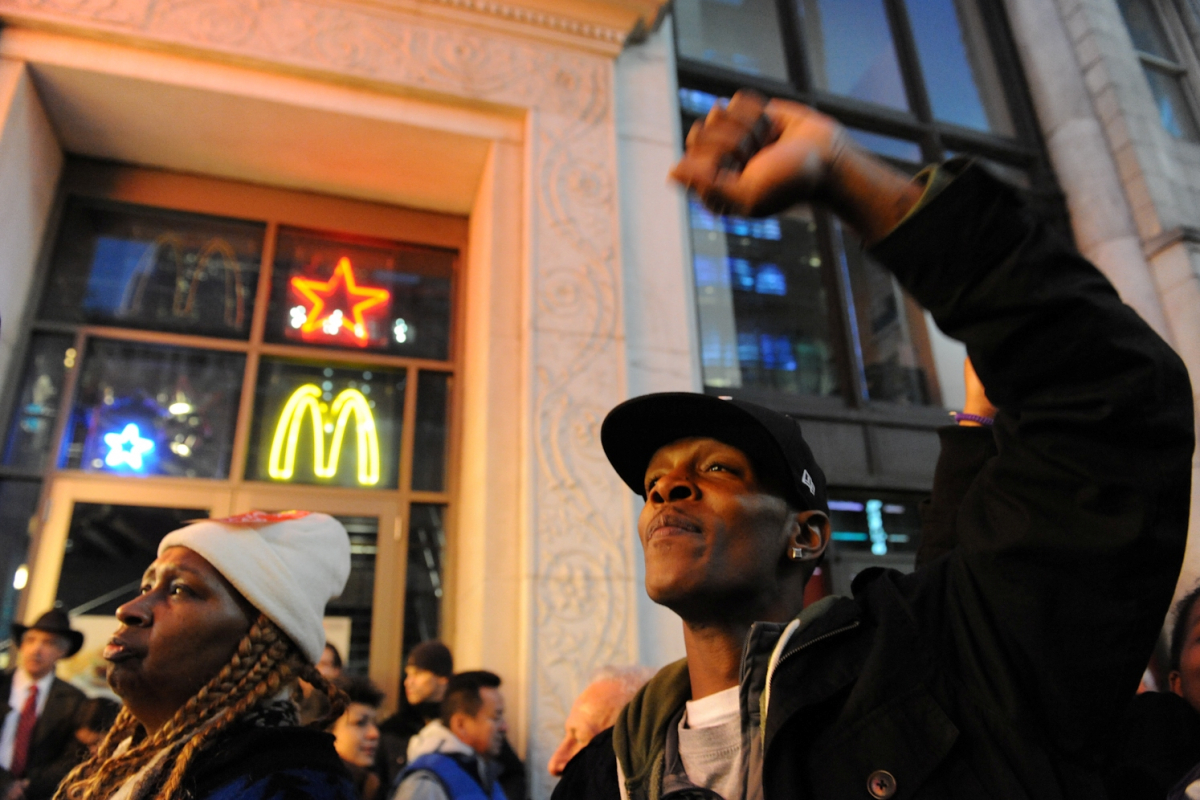 Workers braved high unemployment rates to strike their low-wage jobs in 2012. Walmart workers at suppliers, in warehouses, and in stores staged brief strikes, then fast food workers in New York City walked out for a day, demanding $15 an hour. Photo: Stephanie Keith.

The giddy heights of 2011—the Wisconsin uprising and Occupy Wall Street—yielded this year to a slog of an election season where many crucial questions were not even up for debate, from labor law reform to the minimum wage to climate change.

Unions once again dropped a lot of cash and burned a lot of shoe leather defending against the greater evils of a Romney administration and a Republican Senate. But winning meant holding the line, at best, and a hard pivot after Election Day to defend what too many Democrats won’t: Social Security and Medicare.

Labor still has no strategy for dealing with electoral politics, and a Democratic Party that’s just not that into us. This fall’s independent agitation on taxing the rich and saving entitlement programs was at least a recognition of that fact.

Unions mostly did well on ballot initiatives, with a tax-the-rich measure winning in California and three cities raising the minimum wage. California Governor Jerry Brown vetoed bills that would have helped farmworkers and domestic workers, though.

Even with election-year pressure to sit down and shut up, Chicago teachers notched up the debate around education. Going up against a Democratic mayor, they exposed the bipartisan effort to sell out public schools.

Because of years of coalition-building by the union’s revitalization caucus, CORE, their seven-day strike gained majority public support in Chicago, reversing the teachers vs. parents narrative carefully crafted by school privatizers. Chicago teachers also rolled right over the naysayers in their own national union.

That battle was won, but the war in education is still raging. Just days after the strike ended, as the media spotlight winked off, CTU was mobilizing against yet more school closings.

In the public sector, claims of deficits, both real and completely fabricated, were used to undermine everyone from postal workers to state employees to federal workers at the Social Security Administration—and the public that uses those services. “Oh for heaven’s sake, can’t we please just tax the rich?” read one demonstrator’s sign.

In the private sector, lockouts became the tool of choice for employers seeking to impose onerous contracts: 1,300 American Crystal Sugar workers, now forced out for 16 months but still voting no on the company’s fourth attempt; 8,500 New York utility workers at Con Ed, locked out for a month because they refused to give up pensions (they eventually took two-tier pensions); 1,050 Ohio workers at Cooper Tire, who ended a lockout in defeat in February under threat of a plant closing.

Employers who stopped short of lockouts nonetheless played hardball. Highly profitable Verizon extracted concessions from 45,000 union workers, a year after their two-week strike in 2011 ended prematurely. Highly profitable Caterpillar did the same, after a 15-week strike at one Machinists plant garnered no solidarity. American Airlines spent the year using bankruptcy to force concessions, even though it has plenty of cash on hand.

Denouncing the “vulture capitalists” that bankrupted their company, 5,600 Hostess bakery workers struck in November (see page 16), unwilling to take year-after-year pay cuts when the company was likely to be liquidated anyway.

Longshore workers proved in January that direct action gets the goods, after a campaign of disruption and civil disobedience saved ILWU jobs at the EGT grain terminal in Longview, Washington. A sometimes shaky alliance with Occupy added weight to the struggle, and a settlement came as both the union and Occupy prepared to block a grain ship.

Midwesterners continued to battle the Republican-Koch Brothers agenda to impose “right to work” across the industrial heart of the country.

Indiana passed right to work in February. Then a hard-fought election failed to recall Governor Scott Walker in June, and a referendum to protect against right to work in Michigan fell short in November. No sooner had the dust settled than Governor Rick Snyder reversed himself and agreed to sign a right-to-work law. The bill’s passage led UAW President Bob King to predict a wave of organizing in response. The prospects seem dim in auto, but perhaps in… fast food?

What better way to strike against the Walmartization of the economy than to strike against Walmart? Unemployment remained high all year, and the jobs that were created generally paid badly with unreliable hours. No surprise there.

But Walmart workers did trigger surprise by executing a series of short strikes despite high jobless rates. “If I lose my job that’s fine,” said Dallas striker Colby Harris. “Because what’s going on inside this company is ridiculous.”

First guestworkers from Mexico, shelling crawfish for Walmart, walked in June. In October warehouse workers moving goods for Walmart struck in two linchpin hubs in Illinois and California, and about 180 retail workers walked off for a day, demanding an end to retaliation for organizing. The warehouse workers won immediate improvements and reversed retaliatory firings.

Then, despite intense management threats, a couple of hundred store workers walked out on Black Friday, while community allies picketed at around 1,000 U.S. stores. Hundreds of thousands more workers forced to work on Thanksgiving have now heard of OUR Walmart—both from the media blitz and because their managers held meetings to warn them against those troublemakers.

Just days later and iemboldened by the Walmart walkouts, hundreds of New York fast food workers, organizing since the summer, staged their own day-long walkout with a demand for $15 an hour.

This fall’s actions were no spontaneous strike wave. In each case, unions (United Electrical Workers, Service Employees, Food and Commercial Workers, the Change to Win federation) or worker centers were instigators.

Don’t look for union recognition at Walmart or Wendy’s anytime soon, but workers and unions are looking to upgrade pay and working conditions through agitation, and even to create pressure to raise state and federal minimum wages.

Unions are still seeking an organizing Plan B, since labor law reform in Washington seems more improbable than ever. But it’s clear that many workers are willing to walk a tightrope, even if victory seems a long way off.

A version of this article appeared in Labor Notes 406, January 2013. Don't miss an issue, subscribe today.