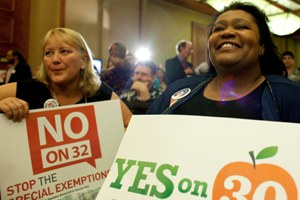 Union-backed ballot measures fared well around the country yesterday, with an exception in Michigan and an uncertain outcome in Phoenix. A round-up:

Prop 30 passed with 54 percent. Led by Governor Jerry Brown and supported by a Democratic/labor coalition called Reclaim California, it prevents $6 billion in further cuts to schools and colleges by raising the income tax rate for top earners and increasing the state sales tax a quarter of a percent.

Fred Glass of the California Federation of Teachers said the challenge was to defuse popular anti-tax sentiment by explaining that the proposition would mostly raise taxes only on the wealthy. “Once people knew that fact, they were far more likely to vote for it,” Glass said.

Backers advertised Proposition 32 as an even-handed way to get money out of politics, but unions called it a deceptive, unfair rule that wouldn’t even affect corporate spending. The measure would have made it illegal to use money raised through payroll deductions for politics—obviously a practice of unions, not employers. Fifty-six percent of voters said no.

Jim Miller, political action vice president for Teachers Local 1931, said the misnamed “Paycheck Protection” bill was the third similar attempt in 14 years, but this time it was disguised as campaign finance reform rather than an anti-union proposition. “They thought that they could bamboozle people with that language,” Miller said. “Voters don’t like to be deceived.”

Minimum Wage Gets a Boost in Three Cities

Though Congressional Democrats aren’t pushing a minimum wage increase, activists in three cities took the plunge and won, despite having far fewer resources than their opponents in the chambers of commerce and hotel and restaurant associations.

Activists in Albuquerque, New Mexico, raised the general minimum a dollar to $8.50 and the minimum for tipped workers, who currently earn $2.20, to 60 percent of that by 2014.

The ordinance, which won two-thirds of the vote, was backed by Olé New Mexico, a community organization that also fights for immigration rights, health care access, and early education.

Olé’s Matthew Henderson said the group followed the example of Santa Fe, which has the nation’s highest minimum wage. A 2003 ordinance tied it to the consumer price index. Santa Fe also boasts the lowest unemployment rate in the state, a fact ordinance supporters repeated to voters throughout the campaign.

In Long Beach, California, the hotel union UNITE HERE pushed a targeted measure to raise the minimum wage for workers in that industry. At the city’s largest hotels, workers will earn $13 an hour and get five sick days a year, along with protection of their tips. Sixty-three percent voted yes.

The union’s success hinged on support from small businesses and community members and the argument that the raise would keep money in the local Long Beach economy, according to spokeswoman Leigh Shelton.

Michigan Voters Veto the Good and the Bad

Unions led an unusual, proactive effort to put collective bargaining into the constitution and thus head off any future attempts to pass a “right-to-work” law. (Such laws outlaw union contracts that require all represented workers to pay dues.)

Ray Holman, legislative liaison for a state employees local, United Auto Workers 6000, contrasted the defeat with last year’s victory in Ohio, where voters saved collective bargaining rights by repealing Senate Bill 5. “They had an advantage because rights were taken away,” Holman said. “Here it was a harder climb. If they passed right-to-work and then we tried to repeal it, we’d have a better chance.”

Mark O’Keefe, a staffer for the Detroit Federation of Teachers, also blamed the other side’s misinformation campaign: “From the ads, you’d think the purpose of Proposal 2 was to allow pedophiles and drunks to run rampant in the schools and to encourage teachers’ strikes,” he said.

At the same time, O’Keefe noted that pre-election polls showed union members backing the measure by just two-thirds. “If we only get two-thirds within the unions, it’s not surprising we don’t get a majority overall,” he said. Michigan’s workforce is 17.5 percent union.

Campaign leaders were reluctant to specify any particular laws that Proposal 2 would have outlawed, O’Keefe said. Besides right-to-work, it was meant to address recent legislation such as a ban on dues check-off for teachers and a bill that outlawed unionization for university research assistants.

O’Keefe thought the vagueness “created uncertainty and mistrust” and a simple ban on right-to-work would have stood a better chance with voters.

Today a pro-union outfit released a poll showing 70 percent of Michigan voters favor collective bargaining, including 55 percent of those who voted against Proposal 2. Their spin was that opponents’ $30 million campaign convinced voters not to change the constitution.

Proposal 2 was hatched behind closed doors by the state’s top union leaders, but Proposal 1 was put on the ballot by a grassroots signature-gathering movement in several cities. The language would have retained the state’s 2011 “emergency manager” law, which allows the governor to throw out elected officials of financially troubled municipalities or school districts. The law has been used to place eight emergency managers, almost all of them in majority-Black areas, who have the power to cut budgets, cancel union contracts, and sell off local assets. It failed 52-48 percent.

It is unclear what will happen to the emergency managers now in place in Flint, Detroit schools, and other cities, and whether the Republican-dominated legislature will simply pass another similar law.

The anti-Proposal 1 effort undoubtedly benefited from what Holman called a “vote-no stampede”—all six Michigan ballot proposals were voted down, both good and bad.

Amendment 49 would have changed the Illinois constitution to require a three-fifths majority vote by the legislature to enact any increase to public employee pensions (while requiring only a simple majority to make cuts). The amendment would have superseded collective bargaining over pension improvements at both the state and city levels.

While 55 percent of those who voted on the change approved it, it fell short of the needed three-fifths. (The amendment could also have passed with a simple majority of Illinoisans who cast ballots on Tuesday, but some voters left the question blank.)

The Chicago Teachers Union, already facing a battle with the city over members’ own underfunded pension, mobilized members to vote no, but early on, people involved were confident the amendment would fail. CTU Legislative Director Stacy Davis Gates said the bill was a product of the stalemate over how to address the state’s pension crisis and actually had bipartisan opposition. Gates said the real issue for teachers and other public sector workers is fixing a public pension system that has them paying in more than they will get out when they retire.

In Phoenix, where hotel union workers with UNITE HERE and Latino high school students campaigned against Maricopa County’s flamboyantly anti-immigrant sheriff, things were at a standstill Wednesday. Sheriff Joe Arpaio’s opponent, Paul Penzone, conceded Tuesday night, when he got 42 percent of the vote to Arpaio’s 52 percent, an 88,000-vote difference.

But many Phoenix-area Latinos reported having to vote via provisional ballots, and 500,000 ballots had yet to be counted Wednesday. “The election is not over,” said Daria Ovide of Campaign for Arizona, a union-funded political action committee.

Confusing last-minute changes in the county’s election rules contributed to the high number of provisional ballots, around 100,000. The rest are mostly early ballots.

The union’s goal has been to bring Latino voter participation up to the Arizona average. “Here we are, teaching new voters about elections, but then the rules change before your eyes,” Ovide said.

The county elections office also produced two pieces of campaign literature in Spanish that listed the election as November 8, even though identical English versions contained the correct date.

Student-led teams and hotel and food service workers registered over 34,000 new voters in the Phoenix area and made an unprecedented effort to increase Latino turnout. They were wildly successful, causing Latino voting to increase between 30 and 40 percent,
campaigners estimated.

In Las Vegas, Culinary Union efforts stimulated an 18 percent increase in Latino registration and a jump in early voting. Across the country, Latino voting increased 26 percent compared to 2008.

Jenny Brown and Jane Slaughter contributed to this report.