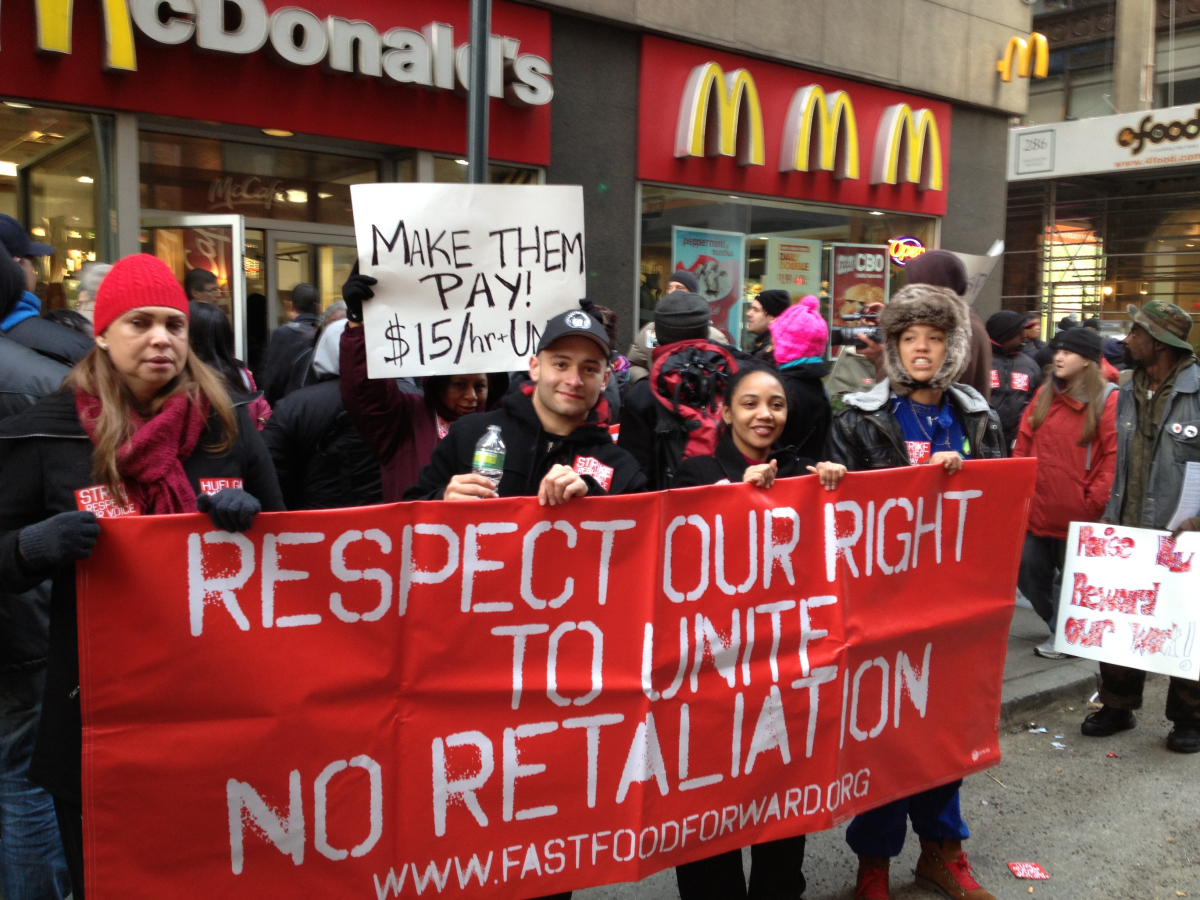 “Good morning! I’m on strike!” shouted McDonald’s worker Darryl Young on a crowded Manhattan sidewalk at 7 am today, as supporters rallied outside the Madison Avenue fast food outlet where he works. “Wanna know why? $7.25!”

Close on the heels of last week’s high-profile Walmart walkouts, fast food workers across New York City staged a one-day strike today, calling for a raise and an end to anti-union retaliation.

The idea is to take on the whole fast food industry, which employs 50,000 workers in New York City, said Jonathan Westin, organizing director of the ACORN successor community organization that is supporting the drive, New York Communities for Change.

“A typical campaign is not going to bring Ronald McDonald to the table,” Westin said. “This is dozens of stores around the city with workers going on strike on the same day. That’s the type of organizing that’s needed.”

That makes it tough to support his two daughters, he said, and many of his co-workers rely on Section 8 housing assistance, welfare, and food stamps to get by, while the corporation they work for makes billions in profit.

That’s why Young joined the organizing committee a couple of months ago. He and a friend have been meeting daily and approaching fellow employees at the store “to see if they want to get down with the union,” he said.

Westin said workers are circulating a petition calling for $15 an hour and the right to unionize without reprisal. The strategy of walking out against retaliation, without first gaining a recognized union, echoes similar recent actions by Walmart retail and warehouse workers.

Management’s counterattack has already begun. McDonald’s employee Diego Delgado, an immigrant from Colombia, said his store’s general manager pulled everyone together for a union-bashing meeting yesterday. Workers huddled for their own meeting outside afterwards.

Speaking through a translator, Delgado explained that his position as a manager (but not a general manager) means he has no steady schedule. He has to cover all shifts, and there are never enough workers—because people keep quitting in frustration at the low wages and demanding work.

“I’m here for the union,” he said at this morning’s rally.

NYCC has 40 organizers working on the campaign, Westin said. The group has also teamed up with the Retail Wholesale union on recent organizing drives among supermarket and carwash workers.

Westin said his group started taking on these workplace struggles after leaders realized that low-wage jobs were the biggest obstacle keeping its members in poverty. And “in the low-wage industry, fast food dominates,” he said.

In addition to NYCC, the coalition supporting the Fast Food Forward campaign includes the Service Employees union and the advocacy groups United NY and the Black Institute.

Young said he was “a little nervous” to strike today, but he found the courage because of “the struggle every day—waking up and coming to a job I don’t want to do.”

Some fast food workers have already been suspended for union activity, organizers said, and they expect further retaliation in the wake of today’s action.

If that happens, “we have community, labor, and clergy ready to stand up and bring workers back to work,” Westin said.

Irania Sanchez is one such ally. A member of the Latino and working-class community group Make the Road New York, she came to this morning’s rally in part because the fight is personal: it brought her closer to her brother’s memory.

Sanchez’s brother worked at McDonald’s, she explained through a translator. He told her about the abuses workers suffered there: how the job demands were ever-increasing, and people would be fired when they could not handle new tasks, even after years of loyal work.

When her brother grew ill, he was fired, Sanchez said. He later passed away from cancer.

Workers boarded a bus from the Madison Avenue McDonald’s to protest at another fast food location this morning. Rallies were planned at locations around the city throughout the day. Organizers said they expected hundreds to converge at a climactic rally in Times Square this afternoon.

Westin hopes today’s action will inspire more fast food workers to take the same risk that strikers like Young and Delgado are taking.

“Our goal is to galvanize as many workers as possible,” he said. No one is without fear, but “going back and making $7.25 an hour, and not being able to put food on the table, is a much harder thing than striking for better wages.”