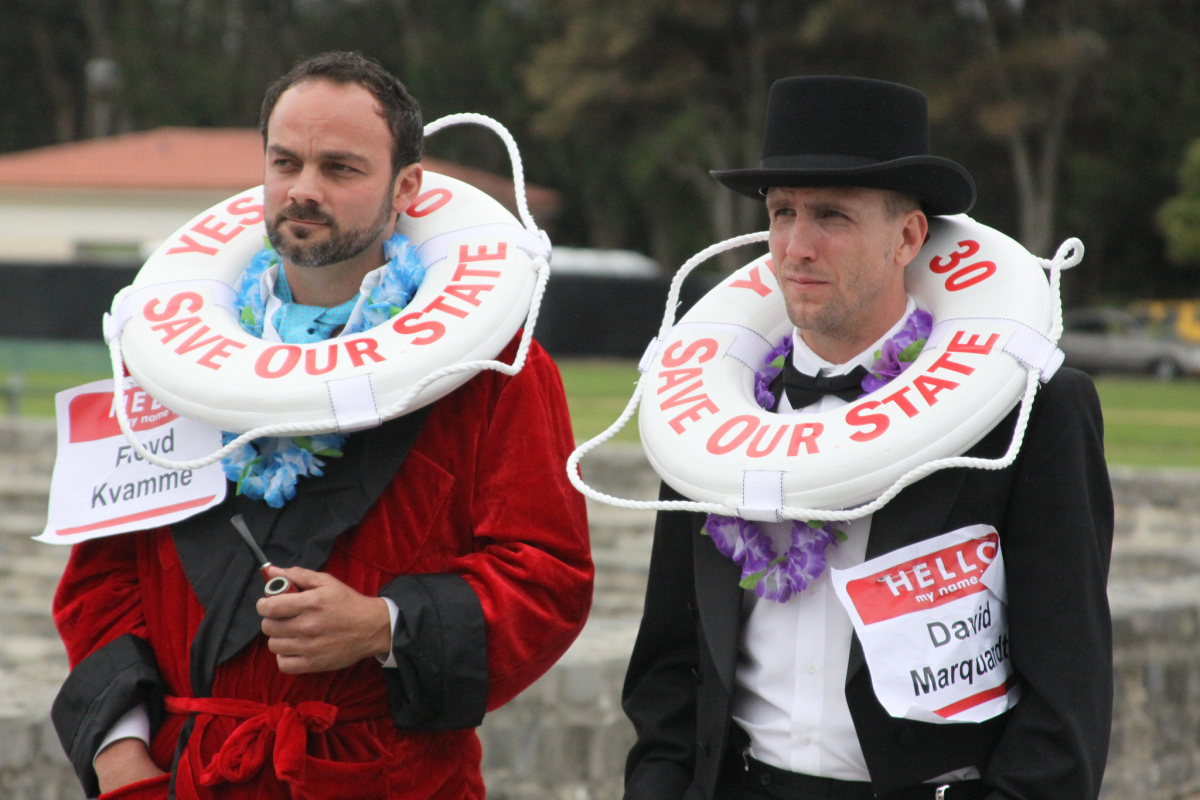 Californians will vote November 6 whether to approve the largest tax hike on the wealthy in that state since 1978.

Unions say Proposition 30 is necessary to forestall further deep cuts to education and other public services. The state is already 47th in the nation in expenditures per pupil, and without Prop 30 conditions in the schools will get worse.

So campaigning hard for Prop 30—TV ads, mailings, door-knocking, phonebanking—would seem to be a no-brainer for unions.

But this fall’s election season is complicated by the presence of another initiative on the ballot. Prop 32 would make it virtually impossible for unions to play a major role in California politics, by disallowing the use of any money garnered through payroll deductions.

Why is such money tainted? Well, because that’s how unions do it. The aim of Prop 32 is simply to keep unions out of politics. Almost no corporations collect political funds from employees through payroll withholding.

Fred Glass of the California Federation of Teachers (CFT) calls the Yes on 32 campaign “astonishingly deceptive.” Its website trumpets, “The politicians are not listening to us. We need to start taking back California by reducing the influence of Special Interests across the board”—including corporate money.

With language like that, no wonder a mid-July online poll by conservative groups showed Prop 32 with 60 percent in favor and only 29 percent opposed.

Steve Gilbert, a retired Service Employees Local 1021 activist, says that early on, his local showed pro-32 commercials to members who weren’t familiar with the measure. They liked what they saw.

Mike Parker, active in local politics in Richmond in the East Bay, says conservatives are cynically “trying to ride the Occupy sentiment to take big money out of politics.”

Although it would ban direct contributions to candidates, Prop 32 would still allow corporations and unions to support candidates through independent committees—like the Super PACS the Citizens United decision let loose.

It’s no coincidence that Prop 32’s originators were also behind Citizens United.

The court case grew out of a film the conservative advocacy group made for showing during the 2008 primaries. Citizens United’s film, “Hillary: The Movie,” was partly funded by the Lincoln Club of Orange County, a group of wealthy businessmen now backing Prop 32.

The Clinton-bashing film was explicitly designed as a challenge to the McCain-Feingold election rules that banned the broadcast of ads paid for by corporations during election season. When the Supreme Court majority used the lawsuit to take the reins off corporate spending in politics, the Lincoln Club hailed the decision as a victory for free speech.

Corporations have proven themselves adept at this game. A preliminary report on 2012 elections in California from the National Institute on Money in State Politics shows business interests spending $127 million and unions $29 million.

Six states in the West and Midwest have passed “paycheck protection” laws, which forbid public employee unions to use dues for political ends without a member’s written consent. Prop 32 goes much further.

California unions have faced such anti-union initiatives before, defeating “paycheck protection” in 1998 and 2005. Unions vastly outspent their opponents to win by 53 percent both times. Prop 32 would make such spending impossible.

Glass said labor’s opponents learned from those losses, crafting a new message that would appeal to anyone in the 99%.

“We start off behind because the other side has figured out a way to make this sound good,” he said. “We have an uphill climb—but this gets the labor movement engaged because it threatens its ability to function.”

“It would be nice if the labor movement got as engaged on proactive issues,” Glass said.

Which leads us to Proposition 30, which in its first year would bring $6.8 to $9 billion to state coffers, and $6 billion per year after that. The proposal is designed to fend off a projected $6 billion in cuts to schools and colleges.

The measure squarely targets the 1%, beginning the increase with families that make more than a half million dollars per year. Their income tax rate would jump from 9.3 percent to 10.3 percent, and families making a million would pay 12.3 percent.

Some union backers of the tax measure have been less enthusiastic about it since an earlier proposal initiated by the CFT was scuttled.

The union was promoting a permanent “millionaires tax,” and a grassroots campaign gathered thousands of signatures early this year. When Governor Jerry Brown put forward his own proposal—backed by the state’s largest unions—CFT leaders worked out a compromise rather than have two similar measures on the ballot.

The compromise, which became Prop 30, limited the income tax hike to seven years and added the four-year sales tax hike, but it also raised taxes on a bigger swath of the wealthy. The threshold was lowered from $1 million to $250,000 for individuals.

Now Brown is seen as Prop 30’s main proponent, not the unions, and he is decidedly not running a “tax the rich” campaign. He leads with the dire consequences to education if Prop 30 fails, and speaks of the need for government to stay within its means and pay down debt through “shared sacrifice.”

Unlike Brown, the CFT is making “tax the rich” the centerpiece of its campaign. Along with the California Nurses, they’ve led creative actions to bring a spotlight on the tax. They put on a skit in front of a yacht club mocking billionaires for worrying about their toys instead of on the state of education in California.

The tax measure was polling at 55 percent in late August, with 36 percent opposed, possibly fostering complacency. Most private sector unions are focused on defeating Prop 32.

Michael Sasson, a clerical worker at UC Berkeley and a Teamster, says his union’s Labor Day picnic featured many “No on 32” signs but almost nothing on Prop 30. A memo from the local asked for volunteers against the anti-union measure, but didn’t mention anything else on the ballot.

“I’m on board against 32,” Sasson said, “but when I talk to my co-workers or to other parents at my daughters’ schools, if we don’t also talk about saving the UC budget and keeping teachers from being laid off, people won’t want to listen.”

The state AFL-CIO and the 700,000-member SEIU state council are shying away from emphasizing the threat to union rights. Instead, they call Prop 32 the “Special Exemptions Act” and decry its “loopholes” for “corporations, billionaires, and SuperPACs”—not an entirely accurate claim, since unions get the same loophole.

The state fed’s Steve Smith says the organization is planning the “largest voter mobilization effort we’ve ever had in California,” with up to 40,000 volunteers. Spending will be in the tens of millions of dollars, depending on how much TV the other side buys. Opponents of the last such bill, mostly unions, spent $54 million in 2005.

Unions enjoy 18 percent density in the state, with 2.7 million members, and the state fed believes it has identified 2.5 million more voters with similar values.

Smith says high turnout of union and likeminded voters will have a spillover effect favoring the tax measure, whether or not they’ve been talked with about it directly.

The biggest donors to both the anti-32 and pro-30 campaigns are unions. The California Teachers Association (the NEA affiliate) has given $16 million to fight the paycheck-deduction measure and $1.6 million for the tax fight.

For the SEIU state council, which has spent $8.2 million on both measures, the disparity runs 3:1.

Josh Pechthalt, president of the much smaller CFT, predicts that national unions will jump in against Prop 32.

“California is seen as an exception against the Republican right-wing juggernaut,” he said. “So if this were to pass it would deflate the Democrats and labor and it would have national implications.”

Martha Kuhl, a nurse and delegate to an East Bay labor council, says the council’s phonebanking has focused on 32. “It would completely flop the entire system on its head and give the big money interests even more power than they currently have,” she said. “Who else speaks up for working people besides unions?”

Related
Minneapolis Strikers Demand a Living Wage for the Lowest-Paid Educators »
Richmond Educators Are First In Virginia to Win Bargaining Rights »
Twin Cities Teachers and School Employees Gear Up for Strike »
As Omicron Rages, Teachers and Students Fight for Safety Measures in Chicago and Elsewhere »
Why (and How) Michigan Nurses Rebuffed a Raid on Our Union »

You can't stop something if it isn't being done. Corporations don't use payroll deductions for political purposes they take money from profits-- away from stockholders. This has no effect on corporate special interest, Corporate Super PACs, Corporate CEOs or Billionaire businesses contributing unlimited amounts to campaigns. Corporate Special interests outspend unions 15-
What's at stake? overtime pay, work schedules, meal breaks, nurse patient ratios, work place health and safety laws, vacation days, sick leave to name a few. Take a peek at how these same businesses treat their employees in Saipan. In the Philippines $68 US dollars a month for 50 hrs per week and no worker benefits that we take for granted. Screw 32.