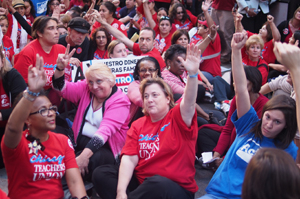 After four days of ballot-counting, the Chicago Teachers Union announced yesterday that 90 percent of CTU members voted to authorize their leaders to call a strike if negotiations continue to go badly. Photo: Bartosz Brzezinski.

After four days of ballot-counting, the Chicago Teachers Union announced yesterday that 90 percent of CTU members voted to authorize their leaders to call a strike if negotiations continue to go badly.

An overwhelming 24,262 members, or 92 percent of the membership, voted. In a resounding display of unity, 98 percent of those voting authorized the strike. There was not a majority of CTU members at any of the 615 schools who voted “no.”

Teachers are angry over large classes, too few social workers and teachers’ aides, a deadening of a curriculum increasingly tailored to standardized tests, and a quarter of all schools lacking a library. They are angry at an unelected Board of Education demonizing them as adversaries.

They are angry that the board, ignoring the pleas of parents and teachers, has systematically moved to close schools and reopen them as privatized charters with a non-union, at-will workforce and policies that punish children with learning disabilities, English language learners, and those with difficulties at home that impede their test-taking abilities.

Teachers are angry at Mayor Rahm Emanuel, a Democrat, for imposing unpaid work on them. He has pushed a seven-hour school day plus 10 extra teaching days with no additional compensation, heaping more on top of their already heavy workload. An April 2012 University of Illinois study found that teachers work an average 58-hour workweek.

They are angry over the board’s proposal of a 2 percent raise over five years and the imposition of merit pay, giving principals the power to reward favorites and punish union activists.

As CTU President Karen Lewis said, “We are tired of being bullied, belittled, and betrayed” by the Board of Education.

The overwhelming vote to authorize a September strike should “put an end to speculation about how educators really feel,” said Lewis, who added that “we listen to our members.”

The vote is an “indictment” of Chicago Public Schools administrators, Lewis said. Educators “who actually work in our schools,” not billionaire-backed anti-union lobbyists, are the ones who can improve schools “in partnership” with CPS, she said.

“We are calling on CPS to negotiate with the union in good faith,” Lewis said.

Thirty CTU leaders, all educators working in the schools, painstakingly counted ballots as 12 clergy organized by the interfaith workers’ rights group Arise Chicago took shifts to monitor the count, in an effort to deter anti-union forces from challenging the integrity of the vote. Anti-union elements attacked the ballot regardless.

The teachers union had a high bar to reach. Illinois legislators, pushed by Mayor Emanuel and Democratic Speaker of the House Michael Madigan, passed a law last June that imposed the unprecedented requirement that strike authorization requires 75 percent of all CTU members to vote "yes." (The previous standard was 50 percent plus one of those who vote.) Under the Illinois law, members who did not vote would count as “no” votes.

Leaders of the anti-union, billionaire-funded, and misnamed Stand for Children organization propelled the legislation. They lined up support from powerful politicians and lobbyists and pressured the state’s NEA and AFT teachers unions into going along with it. President Lewis signed on, but quickly said language was added into the bill she never agreed to.

Stand for Children and other anti-union forces gloated that there would never again be a teachers’ strike in Chicago as the 75 percent threshold would be impossible for the union to reach.

The vote demonstrated the reach of the union’s seven-month contract campaign, an achievement made possible with the election of the Caucus of Rank and File Educators slate in June 2010.

Prior to CORE’s victory, the CTU was run as a top-down union with little member involvement.
The new leadership took on the task of forming contract action committees to educate and involve the members, and to develop new rank-and-file leaders, in 615 schools. The union organized three conferences to strategize and implement the contract campaign.

The union put members in motion, with 6,000 attending a rally and march in downtown Chicago four weeks ago. The teachers joined up with the community-labor alliance Stand Up Chicago, which was demonstrating at the Chicago’s Mercantile Exchange shareholder meeting. Unions have been protesting the Merc for months because the trading group sucks up $77 million a year in handouts from the state while Illinois chops budgets for human services.

The exhilaration of the members was palatable: They roared as they marched. One activist told me during the march, “I’ve been a teacher and CTU member for 10 years and this is the proudest I’ve ever felt of my union.”

Following the dictates of the new state law, a three-person fact-finding committee will issue a non-binding report by mid-July, but only on compensation issues. The committee is composed of one representative of the union, one from CPS, and an independent reviewer.

The strike authorization vote gives the union’s House of Delegates—the CTU’s 800-member governing body—the authority to call a strike. CTU’s contract expires June 30, but a strike would not start before the first day of classes for most schools, September 4.

The labor working group of Occupy Chicago has invited labor and community activists to a June 26 meeting to plan a teacher solidarity summer outreach campaign.

Steven Ashby is a labor educator at the University of Illinois, has assisted the union’s contract campaign planning, and observed the four-day ballot count.

Related
Victory Against Polluter Points Way to Clean, Green, and Fully Funded Schools »
Chicago Teachers: Notes from a Fighting Union »
Before Your Strike Vote, Consider a Practice Strike Vote »
Ten Years Ago, Chicago Teachers Gave Us All a Jolt of Hope »
As Omicron Rages, Teachers and Students Fight for Safety Measures in Chicago and Elsewhere »