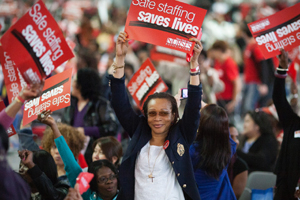 New York nurses upended the 100-year power imbalance between bedside nurses and nurse managers yesterday, voting to bar managers and put the union squarely in the hands of the staff nurses who comprise 99 percent of membership. Photo: Andrew Hinderaker/NYSNA.

NYSNA simultaneously launched a public campaign to make New York the second state that legally mandates staffing levels for nurses, pushing a nurse-to-patient ratio bill similar to one adopted in California in 2004.

Thursday's one-two punch, at a mass meeting attended by 2,400 members, showcased the reform agenda promoted by a slate of nurses who took over NYSNA leadership last fall. "This has been a long time coming," said Pat Holloman, a veteran NYSNA member from Mount Sinai hospital. "After so many false starts and stops, it’s hard to believe we made it."

Members of the Staffing, Security, and Strength slate ran for office pledging to take a more aggressive stand against hospital management and to make structural changes that would put the union squarely in the hands of the staff nurses who comprise 99 percent of the association’s membership.

Earlier this year the new leaders made good on the first part of the platform, launching a coordinated contract campaign that shook up management at four of New York’s busiest hospitals in January. The union beat back a laundry list of concessions.

The bylaw changes that nurses approved are the product of many years of struggle inside the union, against a bizarre structure that often left the union hamstrung.

Because of a holdover from the days of professional associations that pre-dated nurse unionism, nurse managers were eligible to serve on the NYSNA board of directors. Indeed, nurse managers frequently controlled the board.

Managerial involvement in unions is, of course, prohibited by labor law. To stay within legal bounds, the board of directors couldn’t oversee the central work of the organization—union representation, organizing, and bargaining—despite the fact that the lion’s share of NYSNA’s resources came from union members and was spent on union activity.

The board could not debate or discuss the union’s future or vote on any matters relating to the union. That left union functions, including decision-making over bargaining strategy, resource allocation and what grievances and arbitrations to invest time and money in, controlled by staff.

Elected leaders were marginalized. The union had a delegate assembly composed of bedside nurses, which ostensibly set policy, but as an advisory body without control of the union’s resources and agenda, it was ignored.

By voting to give power to leaders elected by bedside nurses, New York is following the lead of nurses in many states, from Massachusetts to California.

The tension between staff nurses and managers bubbled up in most statewide nursing organizations over the past 20 years, driving many to abandon the American Nurses Association. The 115-year-old professional association formulates standards for nursing practice, and opposed nurse unionism for years. ANA includes managers in its ranks and leadership.

Such divisions fueled the creation of National Nurses United (AFL-CIO) in 2009, bringing together unions in California, Massachusetts, Michigan, Pennsylvania, and Minnesota with the United Association of Nurses, formerly the union arm of the ANA.

The ability of the thousands of NYSNA nurses to chart their own course, ensuring that patient care and bedside nursing are the priority of the organization, is a reminder that unions can change based on member involvement. Mary Fitzgerald, a case manager at Montefiore Medical Center in the Bronx, said, "Nurses are so pumped that their voices are being heard."

The next step is a campaign for safe staffing, learning from the California model that has improved patient safety and quality of care by limiting the number of patients per nurse.

NYSNA members adopted a staffing ratios bill as their top legislative priority for 2013, but leaders know the only way to achieve their goal is to mobilize thousands of members, allied organizations, and communities to share their vision—and fight for it.

"The members are more involved than I've ever seen them," said Marva Wade, an OR nurse in Manhattan. "Now the real work starts."