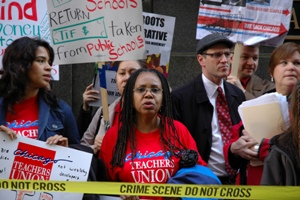 Rahm Emanuel, whom Occupy Chicago has dubbed Mayor 1%, fired another shot at the city’s public schools December 1. He proposed seven school closings and phase-outs, 10 “turnarounds” in which all the teachers and staff get fired, and six “co-locations,” where private charter school operators grab portions of existing public schools.

Two days later, the Chicago Teachers Union and community groups responded with a teach-in that brought 500 to a high school in South Chicago. CTU and allies pledged to fight through grassroots organizing, street mobilization, maybe even occupying schools.

Chicago communities have fought school closings for years, sometimes successfully, sometimes not. About 100 public schools have been shuttered since 2004, when the city’s Commercial Club unveiled its Renaissance 2010 school privatization plan.

In their place are 85 publicly funded, privately operated charter schools, which practice selective enrollment and often reject kids who have special needs or struggle academically. A recent report indicates that Chicago charters are doing no better than traditional public schools on standardized tests.

Chicago’s school closures have been “train wrecks” in the neighborhoods, said community organizer Jitu Brown, who noted that many schools now targeted for closure because of poor test scores were destabilized when they started receiving students ousted from other closing schools.

All 23 targeted schools are in Chicago’s predominantly Black and Latino South and West sides. The transition from open-access neighborhood schools to selective-enrollment charters is tied to the goals of real estate developers, who seek to displace low-income communities of color to sell condos to more affluent, predominantly white buyers.

The teach-in speakers and audience nevertheless exuded power and confidence. Angela Surney, who helped fight off the shuttering of her eight-year-old son’s Marconi Elementary, got a standing ovation when she explained how to be a “victOR” rather than a “victIM.”

The prominent role of parents and community members gave the teach-in unusual depth.

Labor events designed to help save members’ jobs often bring community allies to the podium. But here CTU is part of an authentic partnership. The union has built a community board where teachers map joint strategies with neighborhood partners. It was this board that organized the teach-in.

Professor and education activist Rico Gutstein noted a second factor: Teachers not directly threatened are getting involved. “We’re beginning to understand that it might not be you today, but it might be you tomorrow,” he said. CTU says 90 schools were represented at the teach-in.

At a closing session, CTU organizer Norine Gutekanst asked for reports: “We’re bringing a busload to the school board vigil.” “We’re planning a meeting next week with parents.” “I have been through four—count them, four—closings and turnarounds. And I want you to know that I have beat them each and every time.”

A representative from the Brighton Park Neighborhood Council pledged her group’s turnout at school board actions, and offered Brighton Park’s community schools—which stay open late providing a range of services—as a positive example. (One of the teach-in’s topics was genuine, community-based school transformation.)

This enhanced unity—between union and community, and between teachers across the city—owes much to the union’s transformation. For years, neighborhood groups fought school closures on their own and one at a time.

CTU leaders opposed closures at school board meetings, but did little else to resist—even while membership dwindled from 40,000 to 30,000 amidst the rise of non-union charters.

A new course began when the Caucus of Rank-and-File Educators was formed. Snubbed by CTU officials, CORE members struck out on their own in 2008, getting teachers to join with community organizations leading the anti-privatization fight.

The December teach-in was no flash in the pan. Two days later, the “Midway Network” met, 60 teachers and community members from 16 schools across a swath of South Chicago. Their goal was to save Marquette Elementary, a 1,400-student K-8 school.

They planned a Martin Luther King Day march. CTU is scheduling more such network meetings around the city.

For perhaps the first time, teachers and community are working on a regional level to save their schools.

A Chicago-based writer and organizer, Howard Ryan is writing an organizing book for teachers.

A version of this article appeared in Labor Notes #394, January 2012. Don't miss an issue, subscribe today.
Related
As Omicron Rages, Teachers and Students Fight for Safety Measures in Chicago and Elsewhere »
Teachers Strike against a ‘Heartless’ School Board in Biden’s Hometown »
How Oakland Teachers Took Control of Our Return to School »
New Jersey Welfare Workers Sound the Alarm on Safety »
Jordanian Teachers Union Leaves Behind Legacy of Wins »

Years of mediocrity followed for the White Sox until the 50's, when continually very competitive groups were clogged from the 2010 nfl playoffs by the dynastic New You are able to Ny yankees rockies tickets, apart from the 1959 pennant victors led by Early Wynn, Nellie Fox diamondbacks tickets, Luis Aparicio, and administrator Al Lopez. white sox tickets