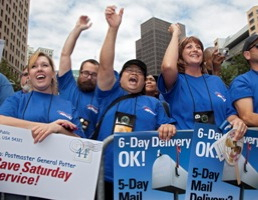 The story line from Postal Service management is simple and apocalyptic: The public is emailing and paying bills online, and the loss of revenue is bankrupting the post office. It will default on payments in November. Next year it won’t be able to gas up vehicles or pay workers.

The solution, management says, is for Congress to let it break union contracts, lay off 120,000 workers, eliminate Saturday delivery, close 3,500 post offices and 200 processing plants, slash benefits, and contract out work. In other words, destroy the service in order to save it.

The loss of plants would add days to delivery times. Replacing the shuttered post offices would be kiosks in Walmarts and gas stations, called “Village Post Offices.”

But postal unions say the bosses are manufacturing a crisis to push their union-busting agenda. “The Postal Service is not going bankrupt,” said Fredric Rolando, president of the Letter Carriers (NALC). “Washington politics is killing it.”

Postal workers in all crafts are beside themselves.

“Workers had nothing to do with this fiasco,” said Jim Kaufman, an Albany, New York, bulk mail tech. “Yet the Postal Service is going back to Congress and asking them to overturn our most recent contract.”

The four postal unions have designated September 27 to “Save America’s Postal Service” and aim to hold rallies in every congressional district, said Joe Golonka, Letter Carriers education director in Michigan.

David Yao, vice president of the Seattle Postal Workers local, said mobilizing members and community allies in a sustained campaign will be a challenge. He thinks the union relies on “smart people in headquarters making good arguments, being clever and thinking of something you trade,” as opposed to rank-and-file action. But the lobbying approach has resulted only in a stab in the back.

The unions argue that there’s plenty of money to continue the current level of service and honor workers’ contracts. It’s just tied up because of a 2006 law which requires the Postal Service to put away enough money, over 10 years, to fund 75 years of retiree health benefits—about $5.5 billion each year.

“It’s the only entity in the U.S. that has to do that,” said Albany postal worker Jeff Levitt. “That’s created much of the deficit the Postal Service faces.”

The Postal Service is self-funded and takes no federal subsidy. NALC says it would have generated a $611 million surplus since 2007 if it weren’t saddled with the extra retiree health payments.

In addition, the Postal Service has accumulated an overpayment into the federal pension system of between $50 and $75 billion, according to independent audits.

If these overpayments were trimmed back, the unions say, the Postal Service could weather the economic downturn and maintain service levels.

This is the fourth time the government has overcharged the Postal Service for the retirement fund, Levitt said. In earlier cases the funds were reimbursed, but with deficit fever overtaking Washington, lawmakers are balking at paying the money back this time, he said.

Republicans are using the squeeze to argue for privatization. Representative Darrell Issa, a California Republican, described any reimbursement as a bailout of a dying government program. Issa is using his position as chair of the House Oversight Committee to push postal privatization.

“Postal management has attempted over and over to create a private network to do this work, where they pay substandard wages, they don’t have any benefits for the employees, and their services are atrocious,” Levitt said. “There’s a lot of money to be made on this if they can contract out.”

He said attempts to contract out express and priority mail resulted in expensive boondoggles.

Hundreds of postal employees picketed Issa’s office in north San Diego September 1. “Congress needs to create jobs, not destroy the ones we have,” read one sign.

The postal unions are backing a bill that would count the retirement fund overpayment towards $5.5 billion in retiree health payments. That bill, HR 1351, has 206 co-sponsors at this writing.

The Postal Service asked Congress to violate the APWU contract a week before the 280,000-member Letter Carriers were scheduled to bargain theirs.

“I don’t even see how you could bargain a contract,” said Brian Keelan, a former Letter Carriers vice president in Queens, New York. “How can we trust them if we sign anything?”

Keelan called the bid to violate the contract a dangerous precedent for other federal unions.

The Postal Workers gave up a lot to gain a no-layoffs clause in the contract members ratified in May, said Paul Felton, a Detroit-area postal worker. In exchange, the contract created a lower wage scale for new career employees, added an additional third-class contingent workforce, and compromised the traditional 40-hour week.

Propaganda has been thick on the shop floor. Postal managers all over the country called meetings in August to tell workers, “If we were a private company, we would have already filed for bankruptcy and gone through restructuring—like the auto companies did two years ago.”

If the Postal Service were a private company, unionists shot back, it wouldn’t have Congress insisting on giant overpayments and would be operating in the black.

The threat to Saturday delivery threatens thousands of carrier jobs, according to the unions. It also threatens small newspapers and magazines that are distributed by mail—not to mention every postal customer who wants to receive her mail in a timely fashion.

“Five-day delivery would be a death spiral,” said Keelan, noting that people who need delivery on Saturday will be pushed to competitors, and will have to pay more. “And it really won’t save any money.”

The Postal Regulatory Commission recommended against the move in March, estimating that cutting a day of delivery would save only 2-3 percent of the Postal Service budget.

The Postal Service has axed 130,000 workers in the last four years, largely through enticements to retire.

Mail volume has indeed declined since an all-time peak in 2006, but many of the layoffs have in reality been spurred by automation. Thirty years ago, letter carriers spent four hours sorting mail before making their rounds. Today they spend 30 minutes doing that work because machines place much of the mail in the order it will be delivered. There are fewer carriers, and their routes are longer.

Unions expected a slow shrinking of the workforce, but members say the Postal Service’s crisis plan would destroy the service, forcing customers to use expensive competitors, undermining rural America’s access to postal services, and handing postal work to unaccountable contractors.

“There’s no reason to privatize—with the exception of some small group of investors who will benefit from this,” said Jeff Levitt. “As opposed to the American people.”

Nepotisum, Too many chiefs, Lazy workers. If this agency was privtised it would make money and be more efficent.

All misspellings and typo's are copywrited. You may not use them.