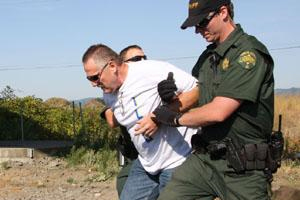 ILWU President Bob McEllrath was detained by police as longshore workers massed on railroad tracks to stop a shipment of grain to a non-ILWU terminal. Photo: Dawn DesBrisay.

The confrontation between West Coast longshore workers and an anti-union exporter exploded as pickets massed on railroad tracks by the hundreds yesterday to block grain shipments.

Police used clubs and pepper spray on protesters in Longview, Washington, as they made 19 arrests.

Early this morning a terminal there was invaded and hoppers holding about 10,000 tons of grain were opened onto railroad tracks.

Ports in Washington shut down completely Thursday as hundreds of longshore workers rushed to Longview, in the state’s southwestern corner.

Bill Proctor, a Longshore Union (ILWU) retiree, was with fellow retirees and active workers on an early morning picket line at a Seattle grain terminal. He said, “If that facility is allowed to go non-ILWU, other facilities will be tempted to follow suit. And the grain terminals on the coast are all going into contract bargaining next month.”

A foreman came out to politely assure the picketers that no one would do their work.

EGT Development, a consortium of three companies, wants to operate its new $200 million grain terminal in Longview using non-ILWU labor, despite a contract with the port requiring it to do so. When the ILWU protested, the company signed up with an Operating Engineers local.

Every other major grain terminal on the West Coast is operated by ILWU labor, and the union asserts that EGT’s goal is to go non-union altogether, ending generations of good jobs.

In a series of protests since July, ILWU members and supporters sat down on train tracks and occupied the new terminal, resulting in 100 arrests. As picketing continued, no trains had attempted to bring in grain shipments since July. But last week a federal judge issued a temporary restraining order at the request of the National Labor Relations Board, which said ILWU pickets had harassed EGT workers.

Once the restraining order was in place, the BNSF railroad decided to try once more to ship grain. Justin Hirsch, a Seattle longshore worker, said grain terminals are major customers for the rail companies, who might move 500 trains a year through a terminal.

That afternoon, hundreds of port workers stood on railroad tracks at Longview to block the mile-long train. Nineteen were arrested and ILWU national president Bob McEllrath was detained briefly—as talk spread up the coast that police had broken McEllrath’s arm. Riot police used clubs and pepper spray on some protesters.

Union officers eventually urged the blockaders to let the train through. But while it sat overnight inside the terminal gates, the word went out. Workers in Seattle left their jobs before the shift ended. Proctor reported that members of Local 19 gathered at 2 a.m. to head the two-and-a-half hours to Longview.

Noting that a train could hold 107 carloads, Hirsch said the mess on the tracks would be “time-consuming to clean up” and noted “somebody’s not getting paid.”

Proctor said, “This struggle is central to our future because grain work accounts for 20 percent of the financing of our pension and welfare funds.”

Not the First Time

Longshore workers have a history of militant action to defend their jobs. In the 1980s a company called Pier Q tried to use non-union labor to move lumber through the small port of Vancouver, Washington. ILWU members organized a rally at the port, drawing longshore workers from as far away as Los Angeles. International President Jimmy Herman spoke to a crowd of 2,000 or 3,000 assembled in a warehouse, recalled Doug Rollins, now a clerk at the Port of Tacoma.

The crowd marched out and surrounded the terminal, and longshore workers with wire cutters ran toward the lumber bundles sitting on the pier.

“Every time you cut the bands off the lumber, the bundle would just explode and it would be like toothpicks shooting up in the air and coming down in a big pile,” said Rollins. Ten minutes after the start of the action, millions of board feet of lumber covered the terminal.

Rollins reported that a policeman asked Herman who led the action. “I don’t know, we don’t know,” Herman said. The international president was there, but the ranks were in charge, Rollins said. Since there were too many workers to arrest, the police stood by and watched as the thousands dispersed and went home.

The restraining order, issued by a federal judge, lasts 10 days. Both sides are back in court today, when the judge will decide if the order should be made permanent.

ILWU spokesman Craig Merrilees said, “There is no formal action at either the local or International level, but large numbers of individuals appear to have taken action on their own.” He stressed that no arrests were made at this morning’s action and called the AP’s report of security guards taken hostage “ridiculous.”

“When corporations and the government turn their backs on working families,” Merrilees said, “it shouldn’t surprise anyone to see people step forward and try to fight back.”

Ports in Tacoma and Seattle are closed today, though the international said no job action has been called. One worker said work would resume at 3 a.m. Friday—unless it doesn’t.

Evan Rohar is a former casual worker at the Port of Tacoma. He begins work at Labor Notes on Monday.

A version of this article appeared in Labor Notes #390, September 2011. Don't miss an issue, subscribe today.
Related
Viewpoints: How Academic Workers’ Leverage Can Grow in a Long-Haul Strike »
Every Union Contract Right Now Should Be the Best Ever »
Could We See a Rail Strike? »
Undaunted by Fines, Massachusetts Teachers Defy Strike Ban »
Ahead of Halloween, Sysco Teamsters Give Corporate Ghouls the Heebie-Jeebies »

I support the ILWU workers and their union actions.

I do wish, however, that this grain could have been salvaged to feed the hungry, by gathering and transporting it to local food banks in the area.

My guess is that many unemployed union workers might be among those relying on local food banks to supplement their diets, as I am (sadly) observing in my own region of the country.