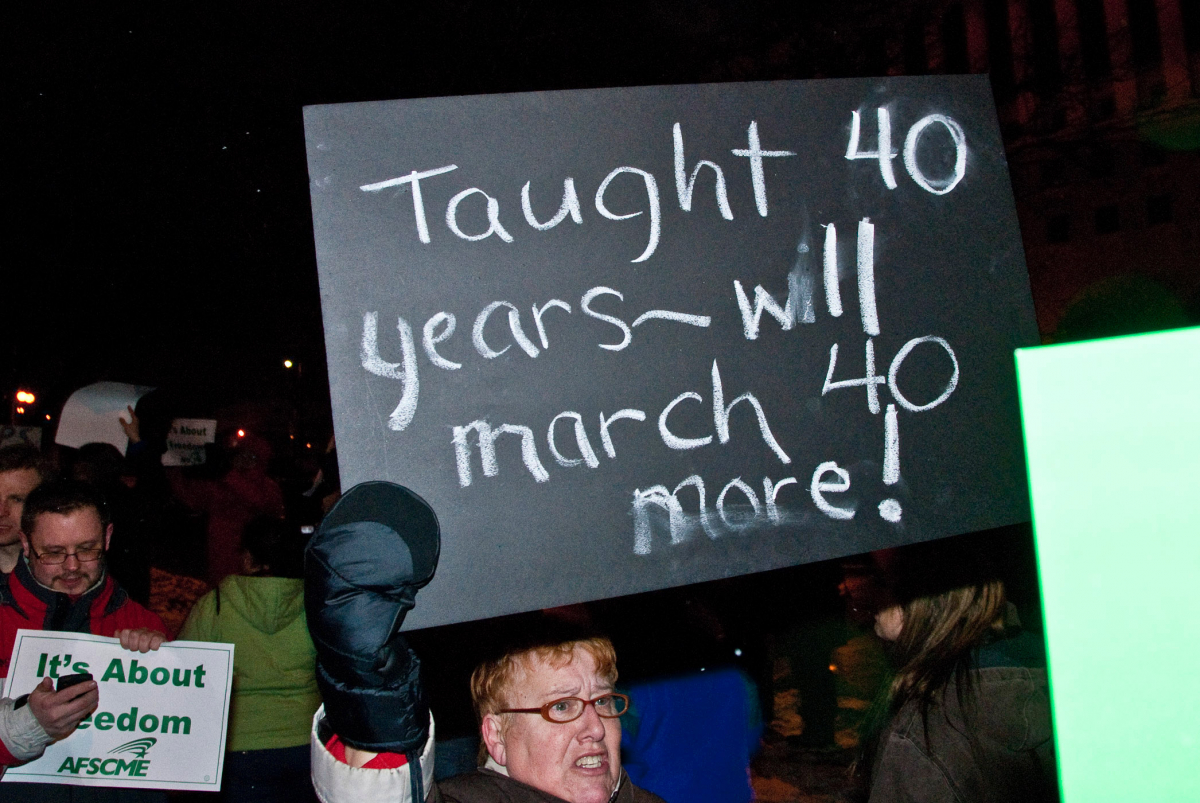 The struggle in Wisconsin was the awakening that labor movement activists had hoped for—disproving the modern notion that those who work will not stand up for themselves. Several hundred thousand people rallied in communities across the state.

Saying “Brother” and “Sister” and “Solidarity” had real meaning. People were exhausted but energized. Community/labor coalitions emerged to build for the future.

But the recall elections of six Republican senators turned out to be an education opportunity lost, in a sea of negative attack ads.

It seems that the “message people” saw the union question as a divisive issue. The only ads that discussed union rights came from the other side.

The millions of dollars in commercials in support of the Democrats did not talk about unions, the history of the labor movement, what we have done to create our modern society, or why it is important for our collective future that unions thrive. This in a state that has some of the richest labor history in the nation.

The commercials didn’t address the fact that Governor Scott Walker had taken away public employees’ union rights—despite the fact that it was the living and personal knowledge of that history that drove many to the streets.

The Lessons of Wisconsin

The other side was consistent in its message: They needed to whack workers’ rights to balance the budgets. Our side, the side that is being whacked, did not defend itself. Too often the theme seemed to be, “Why can’t we all just get along?” (Interestingly, now that our rights have been stripped, Governor Walker’s new position is “we all need to work together.”)

On the positive side, some commercials attacked tax breaks for the rich and corporations and identified the impact brutal budget cuts will have on schools. Some politicians, like Dave Hansen in Green Bay, a 20-year sanitation truck driver and Teamster, made stump speeches as good as anything heard at a Labor Notes conference. But these were not the main face of the campaign.

It’s worth mentioning that between the “bad guys” and the “good guys,” an estimated $35-$40 million was poured into Wisconsin for the elections. Is this historic moment going to come and go as a typical election campaign, or can we create something sustained from all that cash?

Monumental struggles are where people learn who and what it is they are up against. It’s where they build the infrastructure to become better fighters for the struggles to come.

In Wisconsin, local unions and community organizations recognized that they have a lot of internal organizing to do. Many have gotten on that task.

Some may want to go back to where they were, but, to quote famed organizer Jerry Tucker, “There is no ‘there’ there to go back to.”

If we are going to build a labor movement “from the ashes of the old,” let’s build it based on an understanding of how the world works and who the enemy is, rather than on relentless rhetoric about a mythical “middle class.” We are toe-to-toe with capitalism’s brutal assault on the working class. Hundreds of thousands in Wisconsin know it. We need to act like we do.

The recall campaigns needed to talk about the Walker austerity budget, to be sure. But the campaigns should also have insisted on the importance of unions—which gave working people what we have today and which are necessary for a sound future.

That would have directly confronted the corporate assault and laid the groundwork for future organizing. This opportunity is being lost.

In the recall effort a union-led coalition, We Are Wisconsin, ran its own volunteers, literature, and commercials, separate from the Democratic Party.

Over the weekend prior to the August 9 elections, We Are Wisconsin saw more than 12,000 volunteers visit nearly 300,000 doors. It was an impressive infrastructure and many would say far superior to the capacities of the Democrats.

We need electoral action as part of a comprehensive campaign to rebuild the labor movement, but that can’t be the sole activity. If the only goal is to get Democratic politicians elected, and to follow their lead on what’s acceptable to say and then to do once elected—we’ve seen where that gets us.

American history has demonstrated that once a movement is channeled into the Democratic Party, it dies. The previous labor uprising in the 1930s, the anti-war movement, and the civil rights movements all saw their energy and organizational efforts moved off the streets and away from the shop floor and into Democratic Party electoral politics. The movements stopped there.

The struggle in Wisconsin gives us old and new lessons: Workers and communities can indeed rise up against the corporate agenda. An uprising can build the necessary broad-based coalitions. It can lead to local unions recognizing the need to organize internally and develop solidarity unionism. And it may produce a glimpse of something beyond the stranglehold of the traditional corporate parties.

When significant moments in history arrive, we have to make the most of them. We Are Wisconsin will come and go, as so many electoral efforts past, unless we realize who and what we are up against—and then act like we know it.

A version of this article appeared in Labor Notes #390, September 2011. Don't miss an issue, subscribe today.
Related
‘No Contract, No Matisse’: Philadelphia Museum of Art Workers Win First Contract After Strike »
After Strike Threat, Wisconsin Nurses Get a Possible Path to Union Recognition »
Wisconsin Nurses Set to Strike, As Employer Claims It's Banned from Bargaining »
Viewpoint: Don’t Count on New York Unions to Stop the Cuts »
Plexiglas and Union Power »