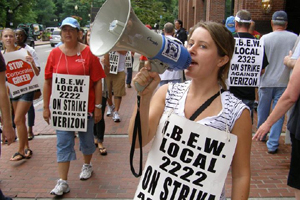 Union picketers are turning away customers at Verizon’s wireless stores in the Northeast, though injunctions could threaten that tactic. Photo: Massachusetts Jobs with Justice. Make sure to check out Verizon striker Pam Galpern on "Democracy Now!"

Verizon’s strike in the Northeast is into Day Five, and big picket lines are turning away customers at Verizon’s wireless stores.

Injunctions could threaten one of the union’s most effective tactics, mass picketing at stores. But another—mobile picketing—is causing havoc for the company. Techs are chasing scab managers through the field, making them cross their very own personal picket line at the bottom of a pole or while they try to work in a manhole.

The strike covers 45,000 members of the Communications Workers and Electrical Workers (IBEW) from Massachusetts to Virginia. Verizon wants to eliminate pensions, as well as limit raises and force big health care costs onto current workers and retirees. The concessions would take $1 billion from workers, at a company which made almost $20 billion during the last four years.

“Everybody’s very motivated,” said Barbara Smith, a member of CWA Local 1109 in Brooklyn. When her local pickets wireless stores, “pedestrians stop and thank us because they understand that this fight is about more than Verizon.”

Operating Engineers, crane operators, and other construction and building-service workers in New York, New Jersey, and Massachusetts are refusing to cross picket lines. Teamsters at UPS have refused to deliver to Verizon offices, denying the company wireless and fiber-optic equipment. Even some non-union workers are refusing to cross. Dozens of unions, from nurses to janitors to teachers, have bolstered picket lines in support.

Busy UPS drivers are double-parking their trucks next to the vans operated by scabs and managers, boosting efforts by CWA and IBEW members to delay and deny scabs’ access to the work.

Verizon has secured several injunctions. In Pennsylvania the injunction limits the number of picketers at a location to six, and mandates they stay 15 feet from scabs. The Delaware complaint alleged that members shut off power to Verizon facilities and glued shut locks on trucks and garage fences.

In Philadelphia, management hadn’t moved trucks off the property ahead of the strike and tight, packed picket lines prevented them from going anywhere.

“We had them pretty much shut down for three days,” said Justin Harrison, a unit secretary in statewide CWA Local 13000. Mobile picketers are chasing trucks around town now that they’re out of the yard.

The company was in court Wednesday in New York seeking similar limitations on picketers’ activity. CWA attorney Gay Semel said that to win an injunction the company needs to claim that police can’t protect Verizon scabs and property, and that the company produced 20 instances of alleged violence.

An injunction delivered to strikers Thursday limited the number of picketers, from six to 50, based on the size of the location. Mobile picketers in New York are limited to six, and while in traffic they must follow 45 feet behind the scab van, Semel said. While courts are no friend of the worker, Semel added, she called these injunctions among the least restrictive she’s seen.

Wireless stores are unaffected, although Verizon is returning to court today to secure additional injunctions against those pickets.

Management is desperate to limit disruption at these wireless locations, especially ahead of September’s expected rollout of the next iPhone. The hot-selling gadget will be available at (mostly unionized) AT&T retail stores as well—and Verizon picketers would be more than happy to let customers know the closest location to patronize.

In New York City, Mayor Bloomberg’s administration has dispatched police to follow Verizon vehicles around, a taxpayer-provided security blanket for a company that paid no federal taxes in 2009-10 (and actually claimed a $1.3 billion refund).

Reacting to the Northeast telecom unions’ long history of militant strikes and inside campaigns, Verizon has tried to limit their power over the years by aggressively contracting out work and moving it around the country and overseas. Eddie Blackburn, a service rep who handles fiber-optic products in Providence, Rhode Island, has seen his union, IBEW Local 2323, cut in half in his 11 years at the company.

Most media accounts relegate the unions to history’s dustbin, because they have not yet been able to organize most of the burgeoning wireless business. They ignore the merciless campaigns waged by Verizon, Sprint, T-Mobile, and others to keep unions out.

But Blackburn says the huge spurt in wireless has a positive side in the strike. Even with a shrunken union, the rapid-mobilization capabilities of text messaging and Twitter feeds delivered to smartphones are enabling members to zero in on scabs’ locations and drive them nuts.

When a member discovered a downed line Tuesday, members converged to picket it. They kept residents from being hurt, Blackburn said, and waited for scabs to appear. (Utility workers also won’t cross their lines.) But when a call came of a scab van 15 minutes away, they dispatched another five picketers to surround it immediately.

“They weren’t prepared for how flexible and fluid our mobilizing can be,” he said. “It gets in their head. They’re not as effective.”

Plus, he said, members are flocking to the activity, which he admits is “sort of fun.” Videos have surfaced “highlighting the hack, garbage work management is doing,” Blackburn said.

But the other side is carrying cameras, too, and giant anti-union megaphones like Fox News are only too happy to paint the strikers as out-of-control vigilantes. Reports of vandalism and a striker “endangering” his child have been amplified.

“You could be Mother Teresa on the picket line, and they’d still find a way to go after you,” Blackburn said.

More importantly, he said, the mobile picketing gives members something effective to do, rather than picketing office locations where managers do inside work and there’s little opportunity to take action.

Meanwhile, the union dispatched its negotiators back to the table Wednesday. Verizon removed its proposal that attached wage increases to management-determined productivity measures, but union officials say the company is still dithering in negotiations.

“The only serious thing here is the traffic I’m stuck in,” said CWA Local 1400 President Don Trementozzi, on his way back to Rye, New York, for another bargaining session.

The unions are planning a vigil at Verizon chairman Ivan Seidenberg’s house in the pricey Hudson river community of Nyack on Friday.