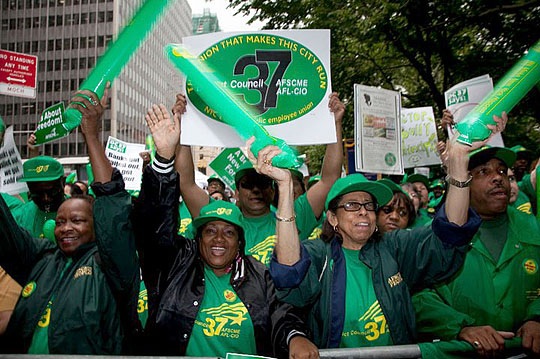 After a contracting-out scandal revealed a $600 million fraud scheme, AFSCME rallied in June against the New York City mayor's layoffs, calling on him to "fire crooked profiteers, not city workers." Photo: AFSCME DC 37.

How did New York City plan to prevent time theft by city workers? By hiring contractors who would, it turns out, steal $600 million from the taxpayers. One of their crimes, prosecutors allege, was to file bogus timesheets claiming extra hours.

The payroll and timekeeping system called CityTime was originally supposed to cost $63 million but ballooned to $750 million over the last decade. It introduced biometric palm scanners to ensure city workers punched in and out appropriately. Only rank-and-file workers were subject to the electronic surveillance, however; managers—and contractors—were exempt.

Local 375 told the city’s then-comptroller of the huge hikes, Forster said, but he declined to pursue action because he deemed the contract too complicated.

Now, 11 people have been charged in the profiteering scheme. Two have fled the country as federal prosecutors scrutinize bank accounts, emails, and timesheets to see how deep the fraud goes.

Prosecutors allege that the lead consultant convinced the city’s project manager (a former co-worker) to change the contract in 2005 so that cost overruns became the city’s responsibility.

Soon after, costs skyrocketed as the ringleaders fattened the payroll with unneeded consultants, inflated the price charged to the city, and filed padded timesheets.

In exchange for kickbacks, the contractor at the center of the scheme directed work to a subcontractor, who then created shell companies overseas to launder tens of millions of dollars.

“This is the patronage agenda of corporate America, to evade the rules and regulations of merit and fitness that civil service established to limit patronage,” said Arthur Cheliotes, president of Communications Workers Local 1180, which represents the clerical workers who used to keep the city’s timecards.

The city has requested $600 million in repayment, but probably will get only a few hundred million.

Forster says the fraud hasn’t taught city leaders anything about contracting out. Even if there had been zero fraud, privatizing still cost the city buckets of money.

CityTime consultants each made $400,000 annually, Forster said, while city employees who do the same work make $75,000.

Now the work is being handed back to those city employees (and 90 of them are doing the work of 200 consultants).

“We had the capability to do this in-house from day one,” he said. “But this mayor doesn’t accept the incredible technical know-how of the people on the city payroll.”

Technology contractors, in particular, work to protect their privileges, Cheliotes said, by refusing to train city employees on their specific software, which virtually guarantees that their contracts get renewed.

Mayor Michael Bloomberg, a billionaire who owns the giant software and media firm that bears his name, has made shifting public services into private hands a hallmark of his three-term administration—despite mounting evidence that it costs the city much more.

Forster’s parent union, AFSCME’s District Council 37, has identified rampant overspending in New York’s 18,000 contracts, which now chew up half of all the city’s discretionary spending.

A study the union released two years ago showed that New York pays two and three times as much per hour for nurse, IT, and call-center contractors as it does for comparable city workers.

Technology contracts stand out for the large disparities in pay between the privatized workforce and city employees. The city’s Department of Information Technology and Telecommunications pays a consulting firm $175 per hour, while the hourly rate for unionized city tech workers is $47 per hour, including benefits.

DC 37’s report says bringing back that contract, and another nine with similar overcharging, could save the city $130 million per year.

Union appeals to chop the contractor fat fell on deaf ears during this year’s city budget battle, in which Bloomberg slashed $1 billion from services and announced 1,000 layoffs in transportation, parks, and children’s welfare—after extracting another $60 million in concessions from teachers. Schools will see 2,600 teaching vacancies go unfilled as well.

Council member Charles Barron, who cast the only vote against the budget, said the threats were a con—and if Bloomberg wanted to save the city money, he ought to monitor his administration’s fraud-choked contracts.

“There’s something deeply contradictory happening when we can waste $600 million and threaten to close firehouses and fire teachers,” Forster said.

A version of this article appeared in Labor Notes #389, August 2011. Don't miss an issue, subscribe today.
Related
Amazon Workers on Staten Island Clinch a Historic Victory »
Staten Island Amazon Workers Pull into the Lead, While Bessemer Re-Vote Is Too Close to Call »
Review: How Labor Can Stop ‘The Privatization of Everything’ »
Puerto Rican Electrical Workers Union Fights Privatization of Island’s Grid »
From Contract Rejection to Union Office: School Therapists Keep Up Push for Fair Deal »