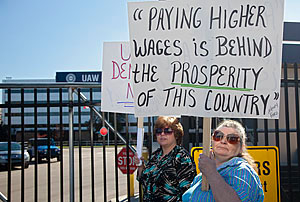 Auto workers picketed their union’s Solidarity House headquarters last fall to protest a contract that pays 40 percent of workers at a General Motors plant only $14 an hour. The union’s VP for GM says he is prepared to accept similar agreements at other plants to save jobs. Photo: Jim West.

Among union companies, the automakers may be only the most flagrant example of a trend toward two-tier workforces. A survey last year by the BNA business journal found that 12 percent of expiring union contracts included permanent two-tier wage provisions. Five years ago, just 2 percent included tiers.

“The problem with two tier isn’t just the low pay,” said Bill Parker, president of a Detroit-area Chrysler local. “The problem is that two tier creates a division within our ranks.”

In the 1970s, Big 3 workers hired in at about 93 percent of full pay and reached that pay after 90 days. Almost all production workers across a company made the same wage, give or take a few cents for different classifications and a bit more for shift premiums.

Today, the two-tier system in place since 2007 means not only a layer that works at half pay indefinitely but also a bewildering array of categories that vary from plant to plant.

Local 551 Financial Secretary Scott Houldieson says that at Ford’s Chicago Assembly plant, the long-term supplementals feel like “second-class members.” The supplementals came on to staff a new second shift. When the union held an election for a department rep, only 50 of 400 members voted.

“They feel disenfranchised and it shows,” Houldieson said.

A FOOT IN THE DOOR

In 2007 the UAW gave each of the Big 3 automakers the right to hire new workers at half the normal rate, about $14. The tier-two workers were supposed to be limited to certain “non-core” jobs or to 20 percent of the workforce, and to bump up to traditional status when 20 percent was reached.

But with the 2009 bankruptcies of GM and Chrysler, the new-hire wage was set at about $14 with no path to full pay, no pension, and no raises or bonuses for six years. The auto industry was set on course to become a fully low-wage industry as older workers retired.

The national average manufacturing wage, union and non-union, is $17.20.

By 2010, the wage-cutting had spread. The UAW agreed to let 40 percent of workers at a Detroit-area GM plant work at $14, to help the company turn a profit on subcompact and compact cars. Last month UAW Vice President Joe Ashton said the union was open to similar arrangements elsewhere to save jobs.

Contracts with the Big 3 expire in September, and both GM and Chrysler workers are facing negotiations without the right to strike—a condition imposed by the U.S. government when it bailed out the two companies in 2009.

GM and Chrylser contracts say wage disputes will go to an arbitrator, who is instructed to take into account what the non-union competition—the “transplants” owned by Mercedes, Toyota, and others—are paying. These companies, mostly based in the South, have 44 percent of the U.S. vehicle market.

UAW President Bob King has declared the union wants to make temporary workers permanent, but he told delegates he won’t challenge the two-tier wage in this summer’s bargaining, citing the union’s lack of power because of the huge non-union sector.

Instead he held up the example of tractor-maker John Deere, where the two-tier system induced the company to in-source work, he said, and where senior workers agreed to forego wage hikes to bring the bottom tier up a bit. Unlike the Big 3, though, Deere workers all get COLA increases.

The multi-tier system generates countless opportunities for division and resentment. The bewildering array of categories is easy for the companies to game.

In a Ford-managed instrument panel plant in Saline, Michigan, workers are called blue (traditional), light blue (transfers from other plants), or orange (low-paid temps, some of them with more than four years). Or they could be $11-an-hour cleaners from a contractor, who’ve replaced Ford employees.

“At first we all hated it,” said blue worker Debi Muncy, about the color coding. “But now it’s a quick way of identifying which group something’s happening to.”

The union has denied light blue workers the right to vote in local elections because they are technically on loan from other factories—even if those plants have closed.

Muncy says when the light blue workers transferred in, often after long layoffs, they looked at orange workers and said, “‘You’re scabs, you took our jobs.’

“But then everybody saw the groups being brought in and out and used against everybody,” Muncy said. “The blue workers said they might as well put bulls-eye T-shirts on us. Now everybody realizes we’re all wearing that bulls-eye.”

Denise Perry, an entry-level worker at a GM plant in Lordstown, Ohio, fell victim to a particularly ugly scheme: She and others were hired in 2002 and kept as “temps” till 2008. Wages slowly advanced to near the normal rate.

In June 2008 the union told them they would finally be made permanent but they needed to drop back down to the new-hire pay level for a few weeks. They’ve been there ever since.

“I went down about three-fifths,” Perry says. “I’m making less money right now than as a temp person in the summer of 2002.”

Perry has watched transfers from other states come in at higher pay, with bumping rights and more protection against layoff. She describes the plant environment as “kind of tense, because it used to be a one-brotherhood kind of atmosphere.”

Perry says she’s “living like I’m on welfare or unemployment. I’m working at a hard job right beside people making thousands of dollars more than me.”

She feels nothing in common with them, Perry says. “I lost a tooth because I couldn’t afford to follow up on a root canal,” she said. “I’ve had shut-off notices for my gas and electric, while I’m working with people that have four computers in their house.”

Perry says she’d hate to see anybody take a pay cut in this fall’s contract, “but if they do, they’ll know how our group has felt for the last three years.”

At Ford’s Twin Cities Assembly Plant, the workforce includes workers at full wages and benefits, entry-level workers starting at $15.52, and temporary part-timers hired in 2007—who’ve worked full-time ever since. The “temps” are the majority.

Brett Hoven says he and fellow temps were offered the opportunity to become permanent, but only at entry-level wages—a $12 pay cut. Their seniority would start from zero.

Ford workers made history in fall 2009 by voting down a concessions reopener that would have brought their national contract down to GM’s and Chrysler’s post-bankruptcy levels. But at the Twin Cities plant, with its temp majority, workers voted yes by 75 percent. Local leaders had told them turning down the contract would cut temps’ wages to entry level, “which turned out to be a huge lie,” Hoven said.

Bill Parker’s local, which has been growing as Chrysler adds a second shift, has bucked the trend. Parker thinks the local might be alone in treating entry-level workers as equals. “A lot went the other direction,” he said.

“We said entry-level people shouldn’t lose anything else because of their entry-level status,” Parker said. “For all things governed by the local agreement, like shift preference or bidding on jobs, they are the same. Our local is clear this is a terrible, divisive thing, and we have to find ways to bridge the gap.”

At the UAW convention, dissidents wore T-shirts that read, “Do the math! = pay 4 = work = solidarity!” They’re selling them, and buttons reading “Solidarity Forever, No 2-Tier” in the plants now.

See Auto Worker Caravan for more information and to order T-shirts and buttons.

A version of this article appeared in Labor Notes #386, May 2011. Don't miss an issue, subscribe today.
Related
Auto Workers Win Direct Democracy in Referendum »
This Year I’m Thankful for the Revolt Against Two-Tier »
'We'll Never Be in This Position Again': Striking Deere Workers Hold Out for Better Deal »
Academic Workers Join Push for One Member, One Vote in the UAW »
'Let's Put a Wrench in Things Now': Deere Workers Strike as Company Rakes in Record Profits »