What’s Next for Wisconsin? 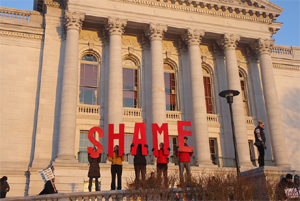 What's the road map to win round two in Wisconsin, and nip wanna-be Walkers in the bud? Scale up, don't step back. Photo: Karen Hickey/Wisconsin AFL-CIO.

Wisconsin Republicans copped to the fact Wednesday that their political standoff with the rest of the state was really about smashing unions, not closing the state’s budget gap.

For Wisconsin’s working class this move was a clear sign—as if one was needed—that the state’s millionaires and billionaires (and the politicians who carry their water) will stop at nothing to ram through their agenda. And for the rest of the labor movement, it’s a sign of things to come.

Madison will be overflowing on Saturday, as workers from around the Midwest gather to express their outrage, but for labor activists in Wisconsin and beyond, the million dollar question is “What next?”

Taking stock of the unprecedented activism of the last month, the road map for round two starts to emerge.

Bubbling up from the grassroots, this past month in Wisconsin has shown us the labor movement’s power and potential. From the creativity and self-organization on display as thousands occupied the statehouse to the countless acts of solidarity from Eau Claire to Two Rivers, this was truly a justice movement, fueled by much more than collective bargaining rights for teachers and firefighters.

The scale and stamina of the hundreds of thousands who sat down, marched, danced, and even traded wedding vows as part of this outpouring of popular outrage has inspired activists around the globe.

That energy is the key to resisting Scott Walker’s legislative coup d’etat. It’s time to scale up, not step back. It won’t be easy, but here are seven keys for building on this unprecedented moment in Wisconsin.

A one-day Wisconsin general strike April 4 would show employers and politicians there and everywhere the depth of the anger and labor’s ability to organize.

The AFL-CIO has called for nationwide solidarity actions that day—the day Martin Luther King Jr. was shot. Knowing a student and worker general strike was coming in Wisconsin would inspire unionists in other states to make their own actions bigger and bolder.

With rallies throughout the state, not just in Madison, such a strike would celebrate the movement’s power and unity, what it accomplished and plans to accomplish. It could mark the beginning of a new and deeper stage of the struggle, recognizing that power is not won overnight.

It would collectively flip the bird to Governor Walker and his billionaire backers and collectively and publicly pledge union members to the tasks ahead.

Days of action could build up to April 4. Every demonstrator this Saturday could be asked to choose an activity for follow-up: gathering recall signatures, building a local community coalition to fight service cuts, attending a union training on the new tactics for building and using workplace power.

Walker’s new law says he can fire any state worker who strikes. All 60,000? The defense against that is massive numbers out.

Public employees are reeling now, experiencing shell shock. But even unions without contracts can have stewards, educationals, and collective workplace actions. They can find ways to show the boss they’re angry, from T-shirt days to pickets before the shift to work-to-rules if they dare. Noontime marches to other union workplaces could strengthen bonds.

They can ask their supporters to keep up the pressure. In La Crosse, for example, parents organized to present each teacher with an apple labeled “We back you to the core.”

The loss of dues check-off is a setback but not insurmountable. Jim Cavanaugh, president of Madison’s South Central Federation of Labor, said, “Given the level of interest union members are suddenly showing in their unions, the unions will survive."

“Annual certification will be a pain in the ass," Cavanaugh said. "But losing dues check-off makes unions talk to their members. If they ask people to have dues taken out of their bank accounts, they are going to get a much higher percentage today than they would have two months ago.”

In some other states, like Texas and North Carolina, unions without rights are already acting like unions despite the odds. As they learn how to do so, Wisconsin public employees are starting from a stronger place.

Walker’s austerity program spares almost no one and has the potential to unite almost everyone. Unions should be approaching community groups not just at the level of executive directors but organically on the local level to fight everything Walker will do before he is recalled.

Concerned about losing music in the schools? Have the kids put on an impromptu concert at the school board meeting. Enjoy having potholes fixed? Organize a community meeting, advertised by a totaled car in the town square and a banner explaining how many more accidents will happen if Walker’s cuts to local aid go through.

Don't Wait for Permission from On High

In every union, public and private, the lesson of the last month is that members don’t have to wait for the go-ahead from above. On February 15 it was one local—Madison teachers and other school workers—that kicked off a statewide strike.

In an early meeting in Madison, AFL-CIO President Rich Trumka said, “The members are ahead of us on this one.” Prove him right.

Recall the pols who tried to annihilate the unions. Elect pro-labor candidates to replace them. The 14 senators who fled the state to block Walker’s plans are looking great now, for Democrats. But on a macro scale, the attitude of many Democrats toward worker rights looks good only when compared to that of zealots like Walker.

If labor doesn't manage to reject career-politician Dems as the candidates to replace the eight recalled senators, and instead run worker candidates pledged to labor’s platform, the result could be a giant “why did we bother?”

Does anyone think that workers in Florida or Ohio are any less angry than the cheeseheads? Union leaders who don’t seize the moment to ramp up their contract campaigns and their organizing should have their heads examined.

Show Us the Money!

One of the biggest lies in Wisconsin’s whole budget circus is that public workers have beggared public treasuries. If the state looks broke, it’s because the money’s in the wrong hands. The national unions should mount a mammoth education campaign to show concretely how taxing the corporations and the rich would solve budget woes. That’s the first step to creating the political will.

Shine a spotlight into the deep pockets. Educate the public about the immense wealth in this economy. Start with the political contributors bankrolling the assault on Wisconsin’s workers—the Koch Brothers, M&I Bank, Wal-Mart.