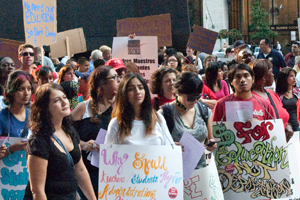 Chicago’s Mayor Daley and his corporate allies had a plan: cripple the Chicago Teachers Union. They nearly got away with it.

Years of poor union leadership as scores of schools were closed, charter schools were expanded, and respect and power for teachers were lost had led to dissatisfied, disengaged members.

But an upset election victory in June by the reform group Caucus of Rank and File Educators (CORE) has given CTU members a fighting chance to resist merit pay, stop evaluations based on high-stakes testing, and confront an education system beset with inequities.

IT’S IN OUR HANDS

When we were agitators and activists who operated from within our classrooms, we were immune to accusations of collusion with management, poor judgment, and incompetence. Now that we run the union, there are high expectations and plenty of potential pitfalls.

As we learn how to transform a moribund union, we face pressure from management, naysayers from CTU’s old guard, and the growing pains of running a 30,000-member local.

If we’re to succeed, we’ll have to train members to take control of school-level contract enforcement, build coalitions and mobilize to oppose the district’s destructive schools overhaul, ally with parents to fight for equitable education for all students, and activate members for a contract fight like we haven’t seen in decades.

As we struggle through hundreds of grievances, we face new threats:

Over the summer, the Chicago Board of Education cited budget cuts and fired more than 1,200 teachers and paraprofessionals, the vast majority of whom had superior and excellent ratings. The new CTU leaders filed suit and a judge ruled the firings illegal. Management’s appeal will be heard in January.

Plans are in the works to radically expand non-union charter schools.

Contract talks will soon begin. The board announced a $700 million deficit next school year and threatened to open our contract prematurely.

The federal Race to the Top program requires Chicago to develop a new evaluation system incorporating student test scores into teacher performance ratings. It will probably involve the “value-added” model spreading around the country, where each student’s score is measured against her prior year’s score.

This haphazard model frequently rates a teacher excellent one year and unsatisfactory the next, and inevitably leads to misuse that hurts children and teachers alike.

To confront these threats we have created an organizing department, to transition from a business model focused on member services to an organizing model that promotes member action. This will take years, not months.

Recently we held a delegates (i.e., stewards) training with 200 members. Our workshops are designed to activate representatives in the schools and give them the resources to lead campaigns.

Eventually, we’d like to see members taking on their principals and organizing with parents and the community before they so much as pick up the phone to call the union office.

We must also connect our vision with allies and carry out an energetic legislative strategy that includes influencing February’s mayoral election.

To do this, CTU has initiated a community board composed of the biggest, strongest community organizations in the city. With these allies CTU can reach out directly to parents, door-knocking and phonebanking.

Together with the community board we’re demanding a superintendent with an education background, instead of another corporate-oriented schools “CEO.”

We’ll fight for an elected school board composed of parents, teachers, administrators, students, and community leaders, as an alternative to the current mayoral control of the schools.

The union has a plan to stop the expansion of charter schools and turnarounds this winter. (The district “turns around” a school by closing and reopening it, firing the entire staff in the process.) Charters receive tons more public resources than public schools, destabilize neighborhood schools, displace students, and don’t provide a better education. We’ll create area hubs that meet, train, and plan with affected communities.

CTU has targeted four charter proposals we think are bound to be defeated with the right amount of pressure and direct action. A December 15 picket and press conference kicked off the public campaign.

The CORE caucus has undergone a transition. Though many of our most active members now work for the union, monthly meetings continue to draw 50 to 70 members.

CORE members are defending the new union administration against specious attacks at union meetings while pressuring leaders to be transparent and true to our original vision. We plan to hold a study group on charters, to determine the caucus’s position on unionizing existing charters.

Some believe charters threaten public schools’ very existence and teachers there should be treated as scabs. Others say unions have never grown without organizing the unorganized and charters represent the next wave of teacher unionists. We plan on airing out these differences and coming to consensus. The union already officially supports unionizing charter schools.

Together CORE and CTU will vigorously oppose mandates that are tormenting teachers with endless paperwork, test prep, and threats of firing for low test scores. There is a talk of picketing an area office where an administrator has been threatening to impose a quota system: at least two tenured teachers would be fired at each school.

While we have a tough road ahead, the prospects for a decent contract and a fighting chance for students, parents, and teachers would be much dimmer had we not won the June election. The new leadership at CTU will make it a heck of a fight.

Jackson Potter is a former history teacher who won a trustee position and now serves as staff coordinator for CTU.

A version of this article appeared in Labor Notes #382, January 2011. Don't miss an issue, subscribe today.
Related
Seattle Teachers End Week-Long Strike »
Ten Years Ago, Chicago Teachers Gave Us All a Jolt of Hope »
How Educators in Brookline, Massachusetts, Won an Illegal Strike »
Minneapolis Strikers Demand a Living Wage for the Lowest-Paid Educators »
Richmond Educators Are First In Virginia to Win Bargaining Rights »