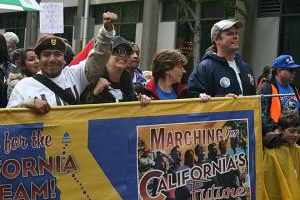 The 300-mile March for California’s Future lasted 48 days. It was the start of a long effort to keep in front of the public the notion that government services are the solution to the economy’s woes, not the cause of them. Photo: CFT.

While the midterm elections were a corporate-led bloodbath in most of the nation, California put a brake on the Tea Party express. Billionaire CEOs Meg Whitman and Carly Fiorina lost their races for governor and senator, despite record-breaking campaign cash and non-stop public employee union bashing.

We also beat the Chamber of Commerce crowd by passing the Majority Budget Act, which restored a measure of democracy to the legislature by requiring a simple majority vote, rather than two-thirds, to pass state budgets.

For years the Republican minority has used the two-thirds rule to block budgets until the Democratic majority agreed to new corporate tax breaks—slicing revenues and worsening budget shortfalls.

Some of the groundwork for these victories was laid by the “Fight for California’s Future” campaign, initiated by the California Federation of Teachers.

In early spring 2009, following passage of a horrific state budget that piled $4.5 billion in education cuts on top of nearly $7 billion the year before, the CFT formed a task force. These leaders, staff, and rank and filers identified three long-term goals: make it possible to pass the state budget and tax increases by simple majorities, and put in place fair taxes on the rich and corporations to fund the state’s vital public services.

We began producing literature and slideshows that addressed the budget crisis as a revenue problem rather than a spending problem. California’s problem wasn’t that schools, fire safety, and health programs spent too much; it was that government wasn’t collecting enough from oil drillers and Silicon Valley CEOs to meet the public’s real needs.

We educated members and friends in other unions in workshops about tax fairness and undemocratic supermajorities. We held workshops at locals, central labor councils, and statewide CFT events, with members coming either after school or with release time during the day.

This education was part of an open-ended campaign that would include electoral work and coalition building. It wouldn’t stop until we achieved our aims—we’d go for years if necessary—because the stakes were the existence of California’s public sector.

That fall, the task force began planning the March for California’s Future. It kicked off March 5, and stretched from Bakersfield to Sacramento (around 300 miles) over 48 days.

Jim was one of six core folks who marched the entire seven weeks—sometimes by ourselves, but at other moments with hundreds and sometimes thousands.

MARCH FOR THE FUTURE

Allies included United Domestic Workers (AFSCME), SEIU, UFCW, the former ACORN, Interfaith Coalition for Worker Justice, and the firefighters. Along the way we were joined by locked-out ILWU miners, students, parents, and former United Farm Workers marchers. Major financial support came from CFT and AFSCME, but we raised money from dozens of unions and many pitched in to house and feed us along the way.

We marched to raise awareness of three ideas, which were emblazoned on all our signs and literature:

• Restore the promise of public education.

• A government and economy that work for all Californians.

• Fair taxes to fund these goals.

We took this message through the heart of the conservative Central Valley, stopping at schools, churches, malls, picnics, and hospitals, engaging in small-scale politics, generating media and promoting the Majority Budget Act at every stop.

The march forced us to reach outside our own ranks to other unions, community groups, interfaith activists, and students. By the end, we brought more than twice the number of people to a rally at the Capitol than the Tea Party could muster a few days before.

The main unions of the march stuck together to campaign for the Majority Budget Act. Much like the high-handed use of the filibuster at the federal level, the two-thirds rule meant a conservative minority could block any solution to the state budget crisis that demanded sacrifice from the most affluent.

A big member-to-member push and effective public outreach passed it with a 55 percent yes vote.

But unless we change the anti-tax discourse, our victory will be short-lived. We’re mounting a large-scale effort to educate our members and the public about the value of public services and the need for progressive taxation to fund the services everyone wants.

We want people to know that the richest 1 percent of Californians, who make on average $1.6 million per year, pay a lower tax rate today than they did in 1992, although they have doubled their share of California’s income over that time.

We are intensifying our education efforts and building on alliances forged during the march, holding workshops for locals, labor councils, and community groups—everything from 15-minute e-board talks to all-day trainings.

Overwhelmingly, members are happy to get tools to explain to family and friends what they instinctively know.

We are also planning a long-term coalition effort to keep in front of the public the notion that government services are the solution to the economy’s woes, not the cause of them. This is the heavy lift, but our perspective is simple: everything is at stake.

For a DVD of the march, email cft2josie [at] aol [dot] com. And see CFT’s excellent educational material on taxes and budgets.