In Connecticut, City Employees Seek Allies to Save Services 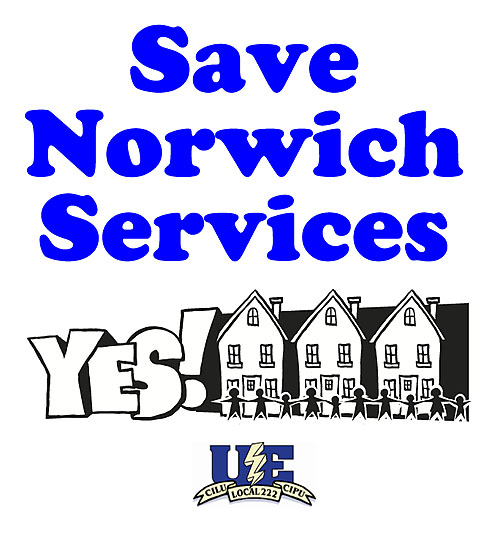 Public employees in Norwich, Connecticut, a former mill town of about 37,000, are organizing to preserve jobs and services and to get their scheduled wage increases. Our campaign includes departmental meetings, marshaling the facts about what members do, finding allies, meeting with legislators, and finding better ways to run the city.

Norwich was hit hard by the recession and declining grants from the state government. The city depends on this money. The Youth and Family Services agency, for example, receives nearly $700,000 a year, but only $76,000 comes directly from the city.

The city manager proposed to meet a budget shortfall by eliminating positions and reducing hours. Union leaders proposed a more equitable solution that would not jeopardize vital services, but in the end members voted to put off scheduled wage increases for a year in order to restore all the positions.

This was the second year in a row members took a wage freeze and sacrificed unequally. Union leaders vowed to prevent it from happening again.

Beginning in September 2010, a strategic planning committee began meeting, open to all members. It developed a blueprint:

The first step was lunchtime meetings with members in all nine departments. A two-person team developed questions and distributed them in advance. The idea was to compile the services members provide in a way that could be used publicly, whether with city council members, for an op ed, or for a brochure.

What would be the best personal interest stories or examples to use? What residents or agencies or community allies benefited from the services and should be brought into the campaign? What alternatives to layoffs should be proposed?

Members were asked to look at their jobs in terms of essential services. What would the impact to the community be if these services were reduced or terminated?

It was an A-ha! experience for many members. A picture was snapped of each department’s workers—the proverbial “human face.”

The results were compiled and distributed among members. They reveal a striking relationship between city services, quality of life, and public safety.

For example, workers in the city clerk’s office, which gives out birth and death records, dog licenses, and absentee ballots, among many other things, said that with layoffs, “What took four minutes will take 20, or require a trip back the following day.” They saw funeral directors, attorneys, and title searchers as potential allies.

The Recreation Department saw their allies as Little League and soccer and lacrosse leagues.

Without a fire code clerk, landlords would run amok regarding regulations on smoke detectors and doors. Loss of the code enforcement officer would increase substandard housing, fire traps, and blight, all of which lower property values.

For every dollar spent by the Youth and Family Services Department on programs to keep kids out of trouble, the savings are $9.60 in potential incarceration costs.

We instructed members in each department how to interest the press in their work, in order to let the citizenry know what they’re getting.

The Children First Norwich program, for example, throws a massive block party every year that brings 2,000 people to local parks. The City Clerk’s office provides a free justice of the peace on Valentine’s Day—a big day for weddings.

Members were asked to think whom they interact with on a daily basis. The next step is to approach these allies and ask them to contact city council members before the public budget hearings in April, hoping to impact council beforehand.

A further step is outreach to state legislators. The goal is for the legislature to fully fund grants to Connecticut towns and cities—and to make sure it gets the money to do so.

We are asking to keep educational grants at the same level and to reduce unfunded mandates. We want new ways for municipalities to raise revenue: a real estate transactions tax, a hotel tax, and fair distribution of the Casino Impact Aid Fund (casinos create a huge strain on the budgets of nearby towns).

A member committee held a breakfast for legislators December 17, with the grateful co-sponsorship of the city administration and school superintendent. We believe we have common ground: the way state aid is allocated is unfair to municipalities.

Our position is that if the goal is to maintain all positions and services, everything should be on the table.

Through the lunchtime meetings, strategic planning committee meetings, and our constant focus on the best way to maintain services, creative solutions have started to emerge. The next step will be an alternative budget.

Budgets are about choices. The city came close to losing important services in the last budget cycle. City employees sacrificed to maintain those services. We need to ensure that decisions the city makes do not come at the expense of livability.

It’s trickier to end the wage freeze, six months in. But our bargaining unit was the only group in Norwich that took one. We have uncovered unanticipated revenue. Insisting on our wages keeps pressure on the city council not to squander funds and on the city manager to handle wages more equitably among the departments.

If anyone wants to know the difference between UE and other unions all you need do is read this article. This is how UE members work together for the good of all and not fopr the benefit of the few. Members who get togeher and put together a plan that will not only help members to keep their jobs but also hold back the need to give back another year of raises. Can't other Unions get the message that UE is putting forth. Why is it that the elected officials deem it necessary to balance their Town's budget as well as the State budget (for that matter) on the backs of their employees. Enough is enough already. The ideas that have been presented in this article show a variety of measures that can be taken by town leaders that will help balance their budgets without harming services as well as employee benefits.
Thank you,