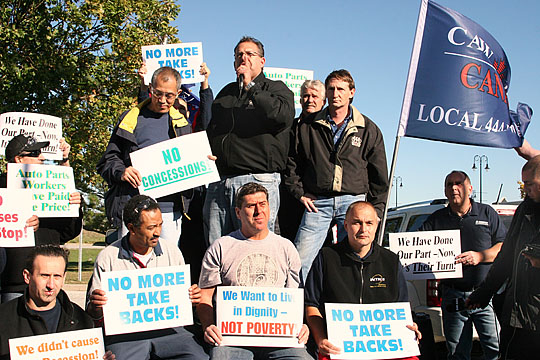 Fifteen thousand CAW members came out for noon-hour rallies outside more than 100 worksites across Ontario. At one of the larger actions, at Magna’s Integram seat plant in Windsor (across the river from Detroit), 250 members rallied with signs saying “No More Take Backs!,” “Auto Parts Workers Have Paid the Price,” and “If CEOs get a raise, why can’t I?”

The day of action came in response to increasing pressure from auto parts manufacturers for union givebacks. At two Ontario plants, the parts giant Martinrea was demanding to cut pay from about $21 to about $14 an hour, eliminate the pension plan, reduce the value of health benefits by 30-40 percent, and axe paid time off.

Rather than respond plant by plant to such demands, the union wanted to speak to the industry as a whole. Preparations for the October action began at CAW’s Auto Parts Council in May, with 250 elected worksite leaders attending.

“All the auto parts leaders were there. Assembly people, too,” said Gerry Farnham, president of CAW Local 195 in Windsor. “We passed a resolution that cutting labor costs is not the solution to challenges in the parts industry, that we will not accept wage concessions, that we will not put the next generation of workers on a second tier.”

At the Martinrea plants, the union had planned a meeting of its 375 members for October 30—three days after the Day of Action—either to vote on a tentative agreement or take a strike vote.

But the company completely backed off: zero concessions.

While the three-year agreement offered no raises, it included job security provisions that CAW considers a breakthrough in the parts industry. The contract prohibits closure of the plants in Ridgetown and Dresden, Ontario, for the life of the agreement and includes a commitment that the next generation of products will remain in-house. Ridgetown does metal stamping, while Dresden makes hitches, chassis, and sport utility bars for Chrysler.

“This language is very historic for us,” said Aaron Neaves, the local’s president. “I’ve been around the industry for 18 years. This is probably the first time we’ve challenged management rights [on production decisions] and gotten a commitment out of them.”

The wage freeze is certainly not welcome, Neaves said, but it’s outweighed by the job security provisions. “In today’s world, job security is worth $10 an hour,” he said.

The day after the Martinrea ratification, the 725-worker Magna Integram seating plant in Windsor took a strike vote. A strike would have stopped production at the nearby Chrysler minivan plant.

Instead, the company caved, and workers ratified a new agreement November 8. While the contract freezes wages, it provides two lump-sum bonuses, a cost-of-living raise in the final quarter of the two-year agreement, and a commitment to include COLAs in the next contract.

The contract encourages retirements by reducing the qualifying age for retiree health benefits from 60 years to 55. The deal also includes job-security language similar to that achieved in the Dresden-Ridgetown agreement.

The Integram agreement avoided concessions for existing employees, but did concede a lower rate for new hires, who will start at 70 percent of the regular wage and take six years to reach full pay. Such handling of new hires is widespread in Canadian auto, beginning with the 2008 CAW agreement with Chrysler, which included phased-in pay over three years.

Canadian parts makers are subject to the same economic forces pressuring the auto industry in the U.S., and Canadian auto workers face the same pressure for givebacks. In fact, the takeaway demands being pushed in Canada were ground-tested first in the U.S.

GM, Ford, and Chrysler got the United Auto Workers to accept two-tier wage schemes in 2007 in which new hires earn just half of regular wages. By using myriad layers of flex workers, temps, and Tier 2 hires, they have expanded the portion of workers who receive lower pay.

CAW has found it hard to resist these trends. CAW officials and rank and filers do not generally view the lower pay of new hires as two-tiering, since the new hires in Canada “grow in” to the full rate in three to six years. But both the Canadian and U.S. systems divide the workforce, with the American version placing new hires in a lower category permanently.

Still, with its October 27 Day of Action and the settlements that quickly followed, CAW signaled its conviction that continued concessions are not the way to protect jobs. “We’re speaking with one voice,” Farnham said, “and we’re drawing the line.”

A version of this article appeared in Labor Notes #381, December 2010. Don't miss an issue, subscribe today.
Related
In a Surprise, John Deere Workers Get to See Contract Before Voting On It »
Auto Workers to Vote on Direct Elections for Officers »
Employers Are Using the Crisis to Push Concessions They Don't Need »
Ohio Auto Parts Workers Strike to Unionize »
Opening the Door to a More Democratic UAW »