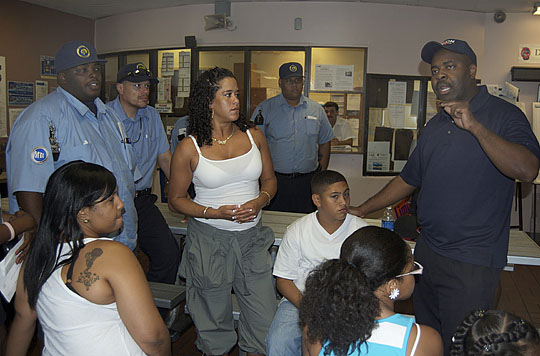 Whitfield Gibson, union chairman at a Brooklyn bus depot, explains to rank-and-file members why they should support the solidarity fund. In the center is laid-off bus operator Sauri Martinez with her son, Orlando, 11. Photo: Alan Saly/TWU Local 100.

When it became clear that their efforts to prevent the layoff of hundreds of bus and subway workers would not succeed, leaders of Transport Workers Union Local 100 in New York decided they had to do more than advising their laid-off brothers and sisters on how to file for unemployment. After some discussion, the local’s executive board approved with no dissent a proposal for a dues assessment of $5 a week for six months to pay for medical insurance for the laid-off members.

The proposal was submitted to members for a vote, where it passed by a margin of 49 out of 6,600 votes cast.

Instead of building unity and solidarity within the union, the proposal and the referendum have produced a storm of criticism of the leadership and deepened divisions within the local. The controversy touches on issues of what kind of union TWU Local 100 members want and what it means to be a union member.

One of the main complaints members have raised, whether they support or oppose the fund, is that there was too little information about it before ballots went out. President John Samuelsen has apologized for the poor advance work and explained that the assessment was rushed to a vote because laid-off members were on the verge of losing their insurance.

The legitimacy of the vote is questioned by many members because the deadline for voting was extended by 10 hours. Although this happened because the American Arbitration Association, which was conducting the vote electronically by phone and internet, could not keep up with the demand for PIN numbers on the final morning of the vote, opponents assert it was done to assure the assessment would pass.

If all that didn’t create enough division, members are also split over the fact that, although members in bad standing could not vote, they are required to pay the assessment. More than a quarter of the local’s members are in bad standing because they have not paid all of the dues they owe from the 17 months when a court suspended dues check-off. (This was done to punish the union for a 2005 strike that violated a no-strike ban.)

They expect to be running in two years and, like the GOP in Congress, think the best way to improve their chances is to oppose everything the current leadership proposes.

“It’s the worst kind of politics that someone within a union could play,” Samuelsen told a reporter. “This wasn’t a contract vote, it wasn’t an election. This was about people’s families. To play internal politics is disgraceful. At the end of the day it’s collective trade union democracy, and the yes votes won.”

But opposition also came from members without any link to former officers. Some voted their cynicism and opposed the assessment because they believed union officers (any union officers) would help themselves to the money in the fund or that the deductions won’t end after six months. When they see that the money went for exactly what the officers said it would, one hopes these members will change their minds.

Other members voted “no” because they think the fund should be supported with voluntary contributions. Others, like plumber Ron Shpiller, told reporters they opposed the assessment because, “we can’t afford to pay for our own children, but we’re going to pay for people we don’t really know.”

The Solidarity Fund has begun paying for medical insurance for laid-off members and their families. Opponents have filed charges against Samuelsen with the executive board and are threatening to sue to overturn the vote. While defending the fund, TWU’s leadership is also turning its attention to the effort to win a good contract when the current one runs out in January 2012.

As it struggles to build an effective contract campaign, the local’s biggest challenge will be winning members to the view that being a union member means more than paying the least amount of dues possible and voting every three years. It means becoming their brothers’ and sisters’ keepers.

Steve Downs is chair of the train operators’ division in TWU Local 100. He voted for the assessment on the executive board and still thinks it was the right thing to do.

It never ends the socialist agenda of Steve downs and Kevin Harrington always has a sob story waiting in the wings. Notice how she has to point she is a single middle aged mother who has to depend on her separated husbands medical coverage seem a little odd that she has the exact same sob story that is always used. First their was never an agreement to keep the terminated workers if we forgo our 3% raise and if their is let me see it surely an agreement as important as this would have been in writing ????? So John Samuelsen is a lier all he ever gives is hot air nothing ever is in writing

I am a laid off Station Agent.I'm a middleaged single mother with two teenaged sons,the 19 year old is not enrolled in college and has lost his dental.We are very fortunate to have medical benefits through my separated husband's job.Many people are not so lucky,and so I voted for this,to help them.I myself have been having serious health problems and must see doctors regularly even having surgical procedures done.I don't know what I would do if I didn't have coverage,those of you who have your jobs should not be so selfish and greedy.John Samuelson could have negotiated with Jay Walder to reinstate us laid off workers by giving back your recent raises as well as other important contract sacrifices like retirement age(55-57) and number of years on the job(25-30),and the number of years to make top pay(from 3 to 5).He made the decision to turn down Walder's lousy offer and so we lost our jobs permanantly.You have a decent living wage and good benefits,be grateful in these awful economic times.Most of us have not been able to find new jobs,keep the union together and strong,not devided and fighting petty political fights amongst yourselves.You need the strength of the union now more than ever.John Samuelson is trying to do the right thing and help people.

Steve leaves out a lot of information for one point American Arbitration Association, according to Samuelsen told them 2 days earlier they were having problems but Steve says it was on the same morning who is telling the truth ????? Second John claimed he shop gated this proposal and yet we can't find anyone who remembers this. And in a strange twist the motion for the $10 a pay check and the information on the union website do not match even to this day. Steve talks about solidarity but he is first a union officer and if half of the members in the division did not want this why did this not carry any weight with him ? I believe a union officer is suppose to represent the WILL of the members not his own. Just because an idea may seem good on paper does not mean we should do it. Steve will also not tell the truth on the issue the station agents were not laid off they were terminated as the letter form the MTA said so why were terminated former employees allowed to vote Steve will say there is a difference between being fired for budget reasons and for wrong doing but not to the MTA they do not have a pass plain and simple socialist Steve did not complain about this because it was votes that were a YES