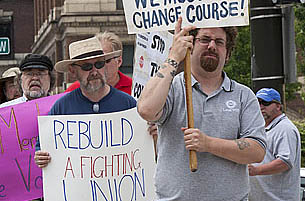 Delegates at the UAW convention lined up to choose a new leader, replacing one member of the union's ruling caucus with another, and ignoring the worst crisis in the union's history. Photo: Jim West.

As the United Auto Workers’ 35th Convention unfolds in Detroit, it is painfully obvious that—despite facing the worst crisis in UAW history—keeping a death grip on power is more important to current leaders than fostering democratic debate on the future of our union.

Efforts from the convention floor to allow for more discussion of issues submitted by local unions were rebuffed by President Ron Gettelfinger, who let the delegates know that he opposed any changes from the floor.

Gettelfinger’s Administration Caucus is the one-party state that controls the UAW at the International level. Every International officer is a member of the Caucus, and they surround themselves with appointed international reps who unquestioningly do their bidding.

It is from this “talent pool” that almost every International officer has been chosen since Walter Reuther was first elected president in 1946. It is this system that has influenced and is supported by Bob King, the Administration Caucus’s choice to replace Gettelfinger as president.

King is inheriting a union that faces threats to its existence: the loss of 35 percent of our membership since the last convention, the imposition of a two-tier regime chopping wages in half at the Big Three, cuts to retiree health care, no real vision for reinventing the auto industry to create new green jobs.

During the government’s bailout of GM and Chrysler last year, UAW leaders caved in to the government’s demand that they give up the right to strike until 2015. Yet there’s been no solicitation of ideas from members about the direction of our union.

When I hired in at the GM Chevrolet plant in Warren, Michigan, in August 1970, the UAW was at its zenith—muscular (1.5 million members), progressive (despite internal flaws, the UAW championed the civil rights movement in the 1960s), and willing to fight for its members. In fact, one month after I hired in I found myself part of the historic 68-day GM strike.

That strike and succeeding contracts in the 1970s won gains that continued to set the pattern for workers in other industries. We won significant wage increases, dental and vision coverage, and most amazingly, 30-and-out retirement at any age, an unheard-of achievement.

Some of that success can be attributed to the democratic ideals and militancy that helped to form the UAW. At one point, UAW conventions were filled with debate. In a 1950 article, labor writer Art Preis said the UAW’s “development was a direct reflection of its internal democracy, which permitted the workers’ native militancy to find expression and allowed their initiative to flower.”

Delegates to early UAW conventions “jealously guarded the right to maintain caucuses… new ideas found a favorable climate and the membership was educated in progressive social and political views.” However, even in 1950, Pries complained that the UAW was forming a “hardening bureaucratic crust.”

The rise of American industry in the last century, coupled with a militant union with democratic values, helped bring industrial workers into the middle class. The last 30 years, however, have seen a reversal in the fortunes of auto workers that picked up speed as it went along. Today, a new hire at GM will make half of what a seniority worker makes and will not receive a company-paid pension or health care when he or she retires.

The freefall accelerated under Gettelfinger. A recent Detroit News article called him “the most consequential UAW president since Walter Reuther” and the person who “led the UAW into a new era that redefined the union.”

The hallmarks of the redefined union? According to the News, “aggressive, and increasingly desperate, concessions” that have resulted in an “eviscerated” membership. Today, there are 355,000 UAW members in all sectors, from universities to aerospace, compared to 470,000 members at GM alone in the 1970s.

What brought my once mighty union crashing to the ground? Certainly a number of changes strained the domestic auto industry: increased foreign competition, a period of poor quality and design, the oil crisis, the globalization of capital, NAFTA, the current economic collapse, and more. Obviously, many of these factors were beyond the scope of the UAW to impact on its own.

But the two main strategies the International settled on to protect members were labor-management cooperation schemes and concessions. History has shown that neither saved jobs.

The main reason for the failure to develop more appropriate strategies is the Administration Caucus’s abandonment of democratic traditions and an unwillingness to listen to points of view that leaders found threatening.

Because of the failure of the leadership to allow open debate, opposition or reform movements arose in every decade since the 1960s, always with proposals that would take on the companies and encourage members to own the union. They were ruthlessly crushed, through threats, intimidation, bribes, lies, and collusion with management.

Brother King has been touted as a pragmatic, progressive activist. Intelligent and articulate, he completed an electrician apprenticeship and a law degree nearly simultaneously.

His tenure as director of UAW Region 1A, on the west side of Detroit, gained him much respect from progressive UAW activists, myself included. As director, King emphasized member education and organizing. Equally important, he pushed a social agenda, encouraging members to be involved in issues such as solidarity with workers in Mexico and Central America.

King actively supported the Detroit newspaper strike in the 1990s (I was arrested with him at one action). He helped organize health care workers and sales people at a Hudson’s department store. His leadership during the Johnson Controls strike in 1997 won the strike, mobilizing 2,000 members from throughout his region to block scab seats from being delivered to Ford.

I had high hopes when King was elected UAW vice president in 1998. But after his election he seemed to fade from view. As head of organizing it was his job to unionize the parts plants and the foreign-owned “transplants” like Nissan and Mercedes. Not one transplant has been organized, and UAW membership has continued its steep decline.

As president, King will undoubtedly do more to recreate the UAW as part of broader social movements than Gettelfinger ever thought of doing. He’s told me he wants to incite the membership to be more actively involved. But when I asked if he would support an effort at the convention to allow discussion of resolutions submitted by members and retirees—rather than the day-long reading of the Administration Caucus’s “omnibus resolution”—he declined.

King says we are “partners“ with the corporations. But U.S. and multinational corporations intend to bury us. Who needs a union to cut jobs and wages? Worse yet, Brother King tried to sell concessions to Ford workers last October, even though Ford was not in bankruptcy and declared a $2 billion profit shortly after workers said “no.” King argued that Ford members should follow the “pattern bargaining” done at GM and Chrysler.

In the end, the only way King could activate members to become involved in broader social issues is by giving them a voice in their own union, leading a fight against concessions, and staking out ideas to create new green jobs.

In the meantime, the delegates at the convention line up behind the Administration Caucus, as labor’s Titanic slips under the waves.

Al Benchich is retired president of UAW Local 909 and an elected convention delegate.

A version of this article appeared in Labor Notes #376, July 2010. Don't miss an issue, subscribe today.
Related
Teamsters United Takes the Wheel »
'We'll Never Be in This Position Again': Striking Deere Workers Hold Out for Better Deal »
Why (and How) Michigan Nurses Rebuffed a Raid on Our Union »
Academic Workers Join Push for One Member, One Vote in the UAW »
Whose Safety? Our Safety! »