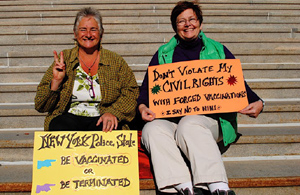 A feverish anger rose this fall among the half-million health care workers across New York state, the first in the nation required to take a flu shot. If they refused, the state’s health commissioner said they could be fired.

New York Governor David Paterson suspended mandatory flu shots several days after the Public Employees Federation (PEF), an SEIU and Teachers (AFT) affiliate, won a temporary restraining order October 16. Paterson said limited supplies of the vaccine should be directed to those most vulnerable to the virus, children and pregnant women.

Still, union activists criticized their leaders for a timid response that allowed aggressive right-wing groups to step in and speak for health care workers.

New York Health Commissioner Richard Daines mandated both the seasonal vaccine and the H1N1 “swine flu” vaccine for every health care worker in an August emergency order, whether they interact with patients or not.

Health care workers complained about the inflexibility—the only exemptions were for people with allergies to eggs, the medium the vaccine is grown in—and expressed anger that government rule-making never sought their input, despite decades of experience handling infectious-disease scares.

PEF noted that, in the past, all other mandated vaccines have been approved by the legislature, and that this “emergency regulation” was in the works for two years.

“We do believe members should get vaccinated unless they have some compelling reason not to,” said Sherry Halbrook, a PEF staffer. “But vaccinations should be seen as part of a much larger effort to control the spread of disease. It’s easy to pass off a vaccine as a quick fix to fend off H1N1.”

At least for adult civilians, receiving medical care is voluntary and should be based on informed choices, said Jemma-Marie Hanson, a nurse at Brooklyn’s Downstate Medical Center. Making any element of health care involuntary, she added, only provokes opposition.

The public’s fears about the swine-flu vaccine, which is being rushed into production to meet high demand, are widespread—although concerns about additives and mercury preservatives, and their supposed link to autism, have been shown to be unfounded.

At a practical level, health care workers note the policy was unenforceable. Would the health commissioner close a hospital if too many nurses, still in short supply, refused the vaccine?

The flu virus can mutate quickly and unpredictably, which means that the vaccine is not a silver bullet, and planning for flu epidemics must be flexible, according to George Annas of Boston University’s School of Public Health. The effectiveness of the seasonal flu vaccine ranges between 70 and 90 percent annually.
“Persuasion based on science, ethics and prudence, not on legal threats, should be the mandatory course of action for public health officials,” Annas argued in a recent editorial.

The New York Committee for Occupational Safety and Health is advocating that health facilities offer workers respirators and have in place an infection control program—washing between patients, not reusing materials, rigorously cleaning environments, aligning waiting areas to create distance between patients—that can check the spread of flu.

"This is the time to mobilize and collaborate with health care workers, not to threaten their livelihood,” said Hanson, who’s a PEF region coordinator. PEF, SEIU1199, the New York State Nurses Association, and AFT, which represents school nurses, all announced opposition. PEF delivered thousands of email complaints to the health commissioner.

Pat Kane, a Staten Island nurse and member of NYSNA’s NY Nurses United caucus, says information was slow filtering down to frontline health care workers. Letters arrived at their homes in August informing them of a November 30 deadline to get inoculated, but there was nothing ready at many hospitals to answer their questions. Lowe said the union established a hotline to answer nurses’ queries within weeks and maintains contact with members through its website.

WHO SPEAKS FOR HEALTH CARE WORKERS?

Nurses point out that some public health experts think the swine flu warnings are overblown, and that large pharmaceutical companies have crafted strategies to push their products onto a panicky public.

Drugmaker GlaxoSmithKline—which a British newspaper reported was charging $10 for a swine flu shot that cost $1.60 to make—drew notoriety among health officials for its aggressive attempts to convince governments to buy its vaccines. “It’s not ‘selling’—it’s a public-health solution,” insisted a Glaxo vaccines executive in the Wall Street Journal.

But instead of dealing with objections head-on, educating members, and attacking the private-profit motives at work in public health, health care unions ceded the stage to right-wingers, who used the controversy to wage war on government itself.

The GOPers are lightweights compared to a lunatic fringe that is protesting the vaccines, Kane said, clustered around commenters at conservative sites like www.freerepublic.com who are convinced mandatory vaccines are a government plot to implant microchips in the population.

But cautious health care unions didn’t fill the political vacuum around the vaccine controversy, drawing fearful union members toward self-described “anti-collectivist” protests that right-wing groups held in Albany. Some carried signs asking “unions, where are you?”

“The tea-party people are rallying around it and providing an avenue for people to voice their fears,” Kane said. “We should have been there first.”