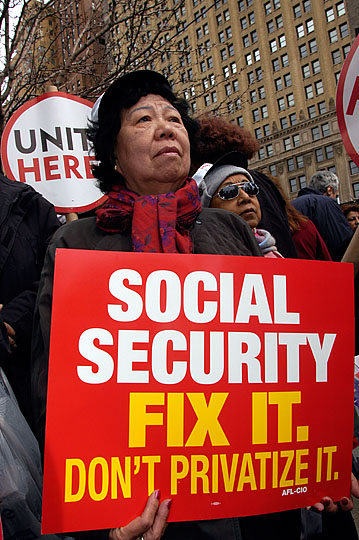 PRIVATIZATION? Labor and allies defeated George Bush’s privatization drive in 2005. Today, many Democrats are speaking out boldly against privatization of Social Security—though it’s not even on the table. The pronouncements seem to be a way to sidestep how they’ll vote on the real question coming up in December—whether to raise the retirement age. Photo: Richard Levine/Alamy

Social Security is quite healthy now—but it will need more cash eventually. Who should pony up? The vast majority of working Americans, suddenly forced to work through what they’d been promised would be their golden years? Or the biggest earners, the top 6 percent?

That’s the choice at the heart of the current debate.

If we let Congress choose to gouge workers, we can be sure that everything else will be up for grabs as well. Social Security until very recently was called the “third rail” of U.S. politics—no politician dared touch it. If they find out they can take away grandma and grandpa’s hard-earned nest egg, both politicians and employers will be emboldened to test what else they can steal.

The fervor to cut is “not a partisan issue,” says Laura Markhardt of the Alliance of Retired Americans (ARA), an AFL-CIO affiliate. “Many, many Democrats are saying, this is one of our options.”

Why cut now, if Social Security will be fine for decades?

“They say, if you wait longer, the problem becomes harder to solve,” explains Maya Rockeymoore of the National Committee to Preserve Social Security and Medicare. “They say it’s best to do it when you have friends in the White House and in Congress.”

Clearly, those who want a secure retirement can’t count on these friends (who don’t seem to read the polls showing their constituents don’t want cuts) this time around. The question is how hard the groups—including unions—who toiled for the Democrats in 2008 will fight the commission’s proposals.

The AFL-CIO has said the right things but appears more focused on its jobs proposals than on Social Security. (Getting people back to work would indeed pump more money into the program.) Rich Trumka is surely under pressure from the White House to be a team player.

Asked whether union leaders were more hesitant to criticize a Democratic president and Congress than they were in 2005 when George Bush was the bad guy, Markhardt said, “It definitely is a different sort of vibe this time around. At first there was some caution and waiting to see what would happen. But after some of the preliminary discussions of the Deficit Commission, people said it was time to rally the troops.”

Mark Dudzic of the Labor Campaign for Single Payer believes “if we can make this an issue in the election campaign between now and November we can defeat a giveback. All these forces are conspiring to make this an inside deal that happens after the election. We can shine the sun on it.”

There’s plenty of thievery to bring into the light. Just look at the Deficit Commission’s favorite proposal right now: raising the retirement age.

Rockeymoore points out that this would take away proportionately more benefits from people with shorter life expectancies. Those who die younger “tend to be lower income, less educated, and racial and ethnic minorities,” Rockeymoore said. “With a higher retirement age, a transfer of wealth takes place, from those groups to those who are higher income, more educated, and not racial or ethnic minorities.”

It would also be “operating in a fantasy land,” Rockeymoore said, to think that older Americans who lose their jobs, now forced to work till 68 or 70, could find new ones.

Dudzic points out that cuts to Social Security also “open the door to privatization,” putting workers’ accounts in the hands of Wall Street, because cuts would weaken popular confidence that the program will be there for retirees.

“It plants the idea that Social Security can’t guarantee you can retire—you need to take care of yourself,” he said.

A version of this article appeared in Labor Notes #378, September 2010. Don't miss an issue, subscribe today.
Related
Review: How Labor Can Stop ‘The Privatization of Everything’ »
Puerto Rican Electrical Workers Union Fights Privatization of Island’s Grid »
Another Look at the VA, in the Midst of a Pandemic »
West Virginia Strikes Again, Defeating Privatization Bill in a Single Day »
Tax Act: Massive Giveaway to the Rich »

Pass a law putting in prison all members of Congress, the President, VP, Cabinet secretaries, agency heads, & White house officials that facilitate the spending or spend any Social Security revenue for purpose other than payments to Social Security recipients or record keeping, question answering & enrollment of paying members or recipients. The only exception is if the offending officials have prior signed agreements by enough individuals paying into Social Security that the combined payments by the individual and the their employer for all social security numbers with these signed agreements have already sent in enough funds to more than cover the expenditure in question. No agreement shall be for a period longer than 2 years. Buying a government bond and spending the money used to buy the for purposes other than Social Security will still be deemed a direct violation of this law.
It is not privatized, government just cannot spend it! It has to be actually invested in something more economically substantive than a government IOU. If they want to know where to invest my money; place it in US minted Gold coins held at Fort Knox, Kentucky. The Army being authorized to shoot anyone trying to take my gold will allow an asset secure sound nights sleep for the first time in 60 years.
With a Smile, HKgovt

Save Social Security
I'm retired US Treasury Dept agency financial examiner. I know where to find the government numbers and how they hide and lie about them. For 60 years 1940 to 2009 there are only 7 years where congress and the president did not take (steal) and spend almost every dime of the Social Security revenue over that years Social Security expenditures. Clinton could only claim balanced budget by stealing $120 billion from Social Security to get out of that years budget hole and up to $0 Zero!

Think about Rationalit­y&Economic soundness (or lack of it) of SS system. My 3 grandparent that lived to collect (one died before it was created) collected over 2.5 times to 5.5 times the total they paid in (died at 77 to 93). My parents collected way over 3 times total paid in (died 86 & 90) did not collect until 64.5 & 66.5. Program never adjusted for life expectancy going from 68 or 69 in the late 1960s to past 73 and 78 now. Why should anyone not disabled be allowed to draw 8 or 10 years longer than their great grandparents or grandparents were allowed to draw benefits. None of us should be allowed to do this when it bankrupts the system.

At 73 you've possibly collected 1.3 to 1.6 times what you paid in, at 78 more than double what you paid. Can work but not unless those 45 to 50 and younger, wait to draw until within Eight yrs of life expectancy to begin collecting. If starting age not adjusted for under 50 on average they will draw out 5 or 6 times what they paid in. Of course program BROKE before they get it all.

Look at obituary ages, over 75 drew benefits way past the 7 to 8 yr break-even point. The Other thing that must be done is to keep 7% deductions or payments going no matter how high the income. If still going broke after reasonable adjustments to early and regular age for beginning benefits & how high the incomes paying in, then we must stop SS payments to those reporting for income tax more than $90, $100 or $120 thousand. Congress decides on a fair amount. In months I'll be sixty & am not entitled to 5 to 7 times what I paid in and am not entitled to draw benefits so long the system goes BROKE.

When it was originally conceived, during the Depression, Social Security was also thought of as a jobs program. Older workers who couldn't afford to retire would be able to do so, opening up jobs for younger workers. We see the same thing now, lots of people can't afford to retire, even though they would like to. A bold demand for those of us on the labor side would be: Lower the retirement age! It'll help with unemployment and it'll let workers who want to retire enjoy some well-earned leisure time. In France, workers are hitting the streets to defend their retirement at age 60. That's the direction we should be going here.

As Treasury Dept Financial Examiner, I can guarantee that to be actuary-sound and financially sound the checks you get for your lifetime have to be cut 20% to make that age reduction. Or what you and your employer pay in has to go up 50% to cut the age and pay for everything that is driving it to bankruptcy now. You want that big a cut in your take home pay? I DO NOT! ALSO I do not want to have to try to live on a check 20% smaller than the estimate sent me every year now. THE IDEA IS COMPLETELY ECONOMICALLY UNSOUND. The Government in France is already broke because of implementing this idea stupidly without increasing the payments coming in or cutting the benefits going out. Fellow Union Members, THERE IS NO FREE LUNCH!!! WISE UP!!!

...it would be funny. The same economists who didn't predict the crash in 2008 are now claiming to have 20/20 on the fiscal soundness of Social Security 10 years down the road! LOL

The simple fact is, Social Security has been running a large "surplus-and-transfer" shell game and supporting the rest of the government out of working people's paychecks. Clinton's economic team were the real architects of this scam- they both raised payroll taxes and cut SS payouts.

Let's inject some honesty into the debate- otherwise it's like talking about whether you should take the left fork or the right fork a mile down the road when you're upside-down in the ditch!