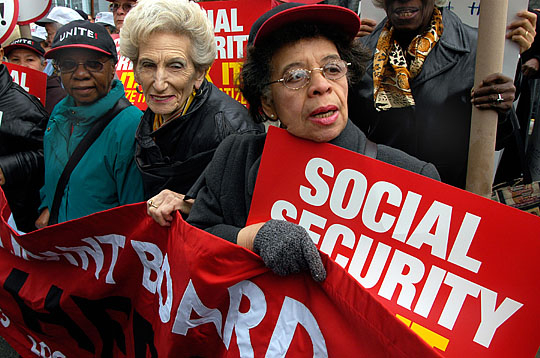 An appalling consensus has developed among Washington elites: they tell themselves cutting Social Security is a slam-dunk. If the two parties will hold hands and act together, they reason, voters can’t blame either one. When Washington players talk up “bipartisan compromise,” it usually means the people are about to get screwed.

It’s part of the new austerity—American-style. We’ll all have to learn to live with less, we’re told, in order to reduce America’s swollen federal deficits. So we’ll whack Social Security benefits, dump school teachers and other state employees, and suppress wages by accepting high unemployment.

Barack Obama is actively collaborating with this conservative ploy. He created a presidential commission on deficit reduction, stacked with conservative deficit hawks from both parties. They will not reveal their recommendations until after this fall’s election—too late for voters to push back.

Obama is playing coy himself, but his aides have made clear his intentions. Social Security is the sacrificial lamb. It will be offered up to Republicans to get them to make a deal on taxes. The tax cuts for the wealthy enacted in the Bush era are set to expire, but Republicans and many Democrats are loath to let that happen.

The crude logic of deficit reduction is that Washington can’t aid state and local governments unless it cuts money somewhere else. This sounds a lot like what the International Monetary Fund does to poor countries in financial trouble.

The reporting in major media is factually distorted and one-sided, leaving some people confused whether Social Security contributes to the federal budget deficits. It doesn’t.

Social Security operates its own separate trust fund which has amassed a huge surplus—money paid in by workers every paycheck. The social insurance system is separate from government, and workers are the true beneficial owners.

Thanks to the increased FICA deductions enacted 25 years ago, American workers have saved vast wealth to pay for their retirement benefits in advance. The present surplus is $2.3 trillion and will grow to $4.2 trillion by 2024.

You might ask your local newspaper why these huge surpluses are never mentioned when fiscal experts are quoted on “entitlement reform.” In reality, Social Security spending has never contributed a dime to the federal deficits, and cutting Social Security benefits would have no impact whatever on reducing the deficit.

The members of Obama’s deficit commission know these facts, and so do the many think-tanks targeting Social Security. When they talk up its “crisis,” they mean a problem that won’t arise for 27 years, when the trust fund will experience a moderate shortfall. As Obama explained in his campaign, that problem can be fixed with a few modest adjustments—not the wholesale gutting the “fiscal experts” recommend.

The establishment’s real objective is to reassure creditors worldwide by demonstrating that the U.S. is willing to trim away the social benefits and middle-class expectations created by generations of reform.

If the political system succeeds in whacking Social Security now (when it isn’t a problem), it will do so again and again, while also stripping away other hard-won public programs that benefit the broad population.

Social Security, in other words, is a political test case for the “new austerity.”

The same conservative experts will keep repeating the mantra that “we” can’t afford for blue-collar workers to be paid middle-class wages anymore (thus the 50 percent wage cuts at the car companies bailed out by the government). “We” can’t afford to pay public employees a decent wage or pension anymore.

“We”—we’re all in this together—have to tighten our belts to make up for our irresponsible spending on ourselves during better times. “We” were so reckless that even the old will have to suffer. The more the public buys the notion that there is no money there, the less likely they are to resist the takeaways.

RED INK FOR A REASON

The origins of the feds’ red ink are not a mystery, though. Deficits have soared because of tax cuts for the wealthy and corporations, fighting two wars on borrowed money, the deep recession that has savaged tax revenue, and the long-term consequences of trade deficits and deindustrialization.

But taking on those issues would require politicians to challenge the most powerful interests. That’s why they think it’s easier to whack old people, and hope future retirees who are the real victims won’t notice.

If political elites get away with raising the retirement age or cutting benefits some other way, it would represent a historic bait-and-switch swindle.

For the last generation, everyone has paid higher payroll taxes to prepare for when the baby boomers retire. Now we are told the country can’t afford it. In fact, if modest adjustments are made any time in the next 30 years, the system will be sound for the next 75 years.

Here’s what happened to your paycheck deductions. The federal government has borrowed trillions from the Social Security Trust Fund and spent it on other things (like wars and tax cuts). Some right-wingers claim the Social Security surpluses no longer exist, but that’s not true.

When the government borrowed from the trust fund, it issued IOUs that are the legal equivalent of interest-paying Treasury bonds, backed by the “full faith and credit” of the United States. By cutting benefits now, some right-wing politicians imagine they can get out of repaying the government’s debts to workers—a slow-motion swindle.

Look at it this way: American workers are collectively the government’s largest creditor, even larger than China. We know the U.S. would not dare default on China. Washington better not try to stiff America’s own workforce.

Our side can win this fight if we mobilize quickly and smartly. Whatever Washington claims to believe, the people have their own consensus about Social Security, shared by both young and old, left and right. Americans are overwhelmingly opposed (85 percent in an AARP poll) to reducing Social Security benefits to address the deficit. A strong majority (65 percent) thinks Social Security benefits should now be increased, given everything else that has happened to people.

The political problem is, how do we make the people’s will felt if neither party is willing to stand up for it? One answer, developed by a galaxy of labor and progressive groups, is to confront individual members of Congress, Republicans as well as Democrats, with a straightforward demand: Take the pledge. Hands off Social Security. Commit to vote against whatever benefit cuts the deficit commission dares to propose.

greider [at] thenation [dot] com (William Greider) is national affairs correspondent of The Nation magazine and author of Come Home, America: The Rise and Fall (and Redeeming Promise) of Our Country.