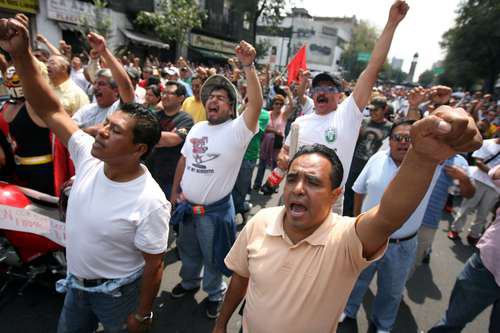 Over the weekend Federal Police seized the plants of the Central Light and Power Company of Mexico, which provides electricity to Mexico City and several states in central Mexico.

The government of President Felipe Calderón announced that the company would be liquidated and all its approximately 45,000 workers fired, which would mean the destruction of the Mexican Electrical Workers Union (SME). Another 20,000 retirees are also now severed from their former employer and their union. The government’s action directly affects at least 250,000 workers and their families in the Federal District and states neighboring the capital.

The government wants to eliminate SME because the union has been a leading force in organizing to oppose Calderón’s economic policies, and in particular its plan to privatize the electrical industry. The government will apparently put the Central Light and Power facilities under the control of the Federal Electrical Commission whose workers are represented by a union loyal to the government. The union argues that this will be the first step to privatizing the industry, though the government denies this.

At the moment 500 Federal Police officers have taken control of over 100 Light and Power plants, reportedly roughing up some workers in the process. The plants occupied by the police are being run by management and by workers from the Federal Electrical Commission.

The union had reported about 10 days before that the government was preparing to seize the plants.

The union did not physically resist the police seizure of workplaces, but called upon its members to remain calm, and declared that it would organize a peaceful and legal resistance to the takeover and the liquidation of the company. While so far there has been no serious violence, in the past the government has been quick to use force to suppress union resistance. Federal Police have been used in the last three years to attempt to break strikes of miners and steelworkers. In other past instances of government-union conflict in Mexico, such repression has led to deaths and beatings, while the government has then indicted union leaders, resulting in convictions and long jail terms.

While the government moved suddenly over the weekend to seize the plants, its actions were no surprise. The Calderón government and its predecessors have often expressed their desire to dissolve the Central Light and Power Company and to privatize electrical power generation.

Secretary of Labor Javier Lozano declared in September that SME’s internal elections were invalid and that General Secretary Martín Esparza and other officers would not be recognized by the government. Without legally recognized officials, the union cannot engage in contract negotiations or other activities.

Last month members of a dissident group in the union, tacitly supported by the government, had also carried out an armed attack on the union hall and robbed union documents and checks.

The government justified its actions by arguing that the Light and Power Company was both inefficient and exorbitantly expensive. The SME had won higher wages and benefits for workers, though the union argues that the financial problems were caused by the government’s failure to properly invest in the company, its mismanagement, and its failure to bill both government agencies and favorite private companies—such as luxury hotels—for its services. The government said it was prepared to spend about $2 billion to pay workers severance and retirement.

While there is little new about the government’s attack on unions and its massive use of police and military force, this is not just one more incident. This is a turning point.

The attack on the Electrical Workers Union—a union central to resisting government policies and to building labor and social movement coalitions, and located in Mexico City, the center of political opposition to the government—may well turn out to be a watershed.

As journalist Luis Hernandez Navarro wrote in the Mexico City daily La Jornada, “The police and military attack against the electrical workers represents a serious setback in the precarious democratic life of the country. It provokes a huge short circuit. It establishes an unfortunate precedent. By attempting to use violence to solve a conflict created by the government itself, it takes us back to the darkest stages of authoritarianism.”

General Secretary Esparza called Calderón’s action “unconstitutional.” He called upon SME’s 65,000 active and retired members to remain calm and resist provocation. At the same time a union statement said that members would defend the nationalized electrical industry, their union, and their constitutional rights. Members gathered in front of the SME union hall and also rallied at the Monument of the Revolution in Mexico City.

A union statement issued early Sunday morning said, “They have declared war on us and we are going to respond, always exercising our Constitutional rights and guarantees, of that there is no doubt.”

Tens of thousands of workers—members of the Mexican Electrical Workers and their allies—have been rallying and marching in Mexico over the past three days. Andrés Manuel López Obrador, the man who claims he actually won the 2006 presidential election, has put his movement behind the electrical workers, holding a huge rally in Mexico City on Monday. The left-of-center Party of the Democratic Revolution (PRD) also came out in support of the union, and its representatives and senators have worn Light and Power workers uniforms to the Mexican Congress to express their solidarity.

SME leaders have called upon Mexican unions and unions of other countries to rally to their support.

The union said that with the military having occupied the power plants, it was no longer in a position to ensure the delivery of electrical power in the region.

Power outages have occurred in several Mexican neighborhoods and the Mexican media have attributed these to workers' sabotage. The union denies it is engaged in sabotage and blames the government for the power failures.

The Mexican Electrical Workers Union (SME) has asked for international solidarity in resisting the government liquidation of their company, the termination of the workers, and thus the destruction of the union. To protest this action, please follow this link to Labor Notes' Solidarity Network.
A version of this article appeared in Labor Notes #367, October 2009. Don't miss an issue, subscribe today.
Related
President of South Korea's Militant Union Federation Arrested for Organizing a Rally »
Mexico’s Only Independent Farmworker Union Struggles On Despite Obstacles »
Don’t Compromise on Farmworker Rights »
Leveraging Strategic Position, Argentine Vegetable Oil Workers Win Big Raises with Coordinated Strike »
In Likely Last Battle, Korean Welder Who Occupied Crane for 309 Days Fights to Win Her Job Back »