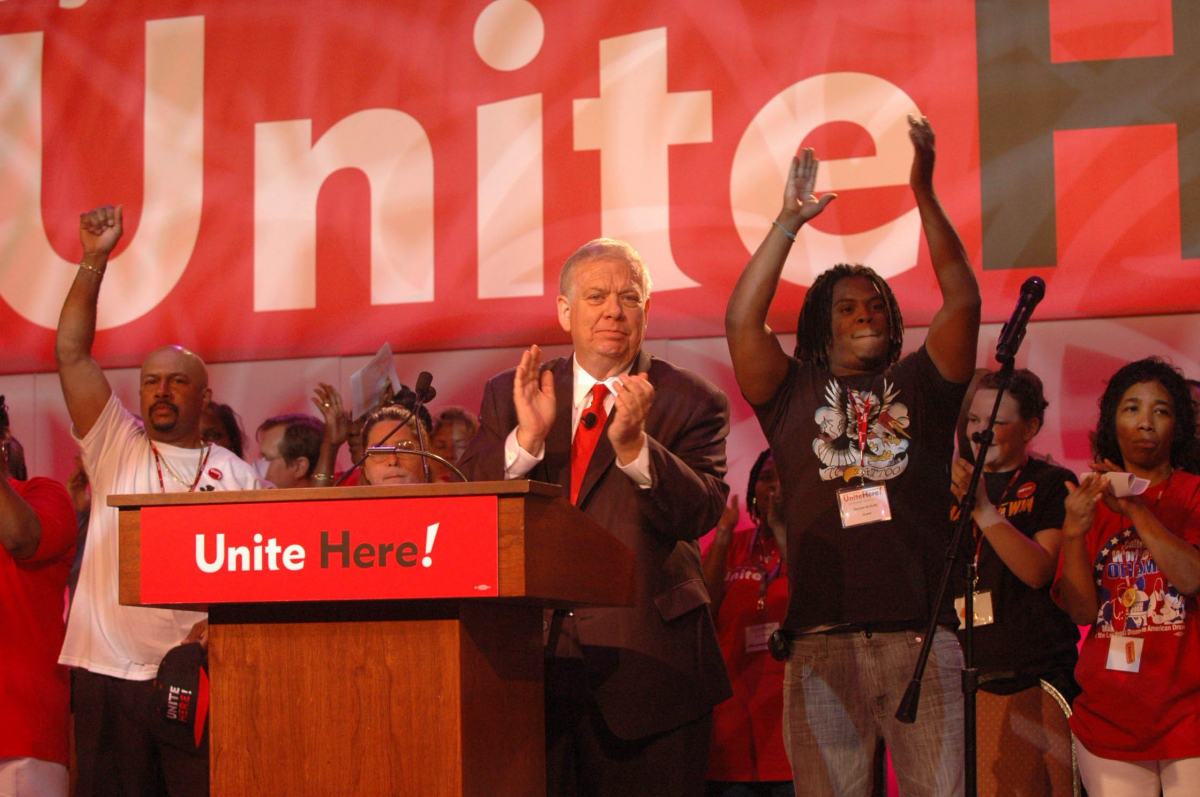 When was the last time you heard a union president denounce another union president—publicly? For labor’s upper echelon, the most scrupulously honored principle is protocol. (And you thought it was “solidarity.”)

But at the UNITE HERE convention in late June, the torrent of abuse heaped on Andy Stern’s head would have caused a less confident labor statesman to turn pale. “Darth Vader” and “pirate” were just two of the epithets—and these from presidents without a dog in the fight between UNITE HERE and Stern’s Service Employees (SEIU).

Even presidents who followed SEIU out of the AFL-CIO four years ago piled on: the heads of the Food and Commercial Workers (UFCW), Teamsters, Carpenters, and Laborers were among 25 who signed a letter pledging to support UNITE HERE against SEIU’s raiding attempts (see "UNITE HERE Split Gets Even Messier").

Among the seven affiliates of the Change to Win federation, that leaves only the Farm Workers not publicly at odds with SEIU.

So is the unanimity around Stern-bashing a lurching step toward unifying (most of) the labor movement? Will UNITE HERE, now in talks about rejoining the fold, lead the other CtW unions back into the AFL-CIO?

The parade of presidents made it clear that their anger at SEIU was motivated not by chummy deals with employers that have allowed SEIU to unionize workers with little say-so on the workers’ part, nor by the fact Stern gets these deals settling cheap. Not by the widespread embezzlement that had highly placed Stern protégés in hot water last year. Not by the January trusteeship of a California local that resisted Stern’s reorganization plans, United Healthcare Workers-West, nor by SEIU’s creation of megalocals run by appointees, in which rank and filers barely have a chance to be heard. Not even by Stern’s agreement to put a muzzle on nursing home union members, to keep them from reporting patient abuse.

No, these union leaders’ outrage was prompted by Stern’s flagrant violation of that other hallowed labor principle: jurisdiction. SEIU was not only attempting to take over hotel organizing drives begun by UNITE HERE but also claiming the right to organize hotel workers in the future. That’s turf, and them’s fighting words.

At the convention, the Operating Engineers’ Vincent Giblin praised UNITE HERE for never organizing the engineers at a hotel, even when the Operating Engineers couldn’t. AFSCME’s Gerald McEntee said, “For another union to come onto your turf…it breaks the unwritten code.” He led the crowd in a chant of “Bullshit! Bullshit!”

Since January, the heads of 12 large unions, from both federations and the National Education Association (NEA), have been meeting under the auspices of American Rights at Work chair David Bonior.

Their goal, “to create a unified labor movement,” was broad enough to hide a host of obstacles. Smaller unions distrust the process, and there’s lingering anger at CtW unions for leaving and sticking the remaining unions with mounting bills, including staff pensions. There’s criticism of the AFL-CIO for being driven by an unelected staff inner circle, and, even before the current brouhaha, there’s resentment and fear of what’s seen as Stern’s megalomania.

It was already widely acknowledged that Change to Win was a failure on its own ambitious terms: it had pledged to inject life into the movement and ramp up organizing like a second CIO, but CtW’s Department of Labor filings say it has lost almost half a million members since it was founded.

There had never been cohesion among CtW’s member unions, leading to such embarrassing spectacles as Stern announcing a health care reform partnership with Wal-Mart without informing the UFCW, the union trying to organize the company.

Despite CtW’s virtual collapse, most of its affiliates probably aren’t coming back to the AFL-CIO straight away.

The Laborers are rather comfortable outside the AFL-CIO, where they are less bound by jurisdictional rules. With federal stimulus money opening up less-skilled jobs in residential weatherization, the Laborers hope to be the union organizing those workers, and it’s easier not to have to deal directly with the AFL-CIO’s building trades.

The Carpenters left the AFL-CIO even before CtW was created and are likely in no hurry to rejoin. President Doug McCarron has followed a course similar to Stern’s: dramatic centralization of the union, partnerships to “add value” for employers, and bids to expand jurisdiction.

The UFCW’s Joe Hansen has been a player in unity efforts, mediating between SEIU and UNITE HERE, hosting the January “group of 12” meetings, and leading cross-federation talks that led to a unified position on immigration reform this year. For now, he may keep the union where he feels he can do the most good as a referee.

For all the CtW unions, cost is a factor. AFL-CIO per-capita fees are higher than CtW’s.

If CtW’s four-year track record has failed to impress, neither has the lumbering tenure of the Sweeney-Trumka New Voices team that took over the AFL-CIO in 1995. Though the AFL-CIO is not to blame for the corporate assault that’s left unions weakened, it can’t claim to have stirred leaders or members to live up to their potential, either.

At this time of direst need, Trumka’s running on his record as a 14-year second banana is like Ed McMahon claiming the “right” to replace Johnny Carson.

Trumka is on a “listening tour” but shows no signs of humility or stock-taking after a 14-year decline in membership and union power. More energetic labor leaders, the Communications Workers’ Larry Cohen and the Steelworkers’ Leo Gerard, show no interest in challenging him. Perhaps they feel they are more powerful bargaining with and organizing big corporations than they would be heading the AFL-CIO.

Trumka appears uninterested in one of Bonior’s ideas, a “federation of federations”—encompassing AFL-CIO, CtW, and NEA—preferring simply to take the prodigals back one by one. He seems to be hoping that momentum on labor’s legislative agenda will restore the AFL-CIO’s gravitational pull.

The Trumka of today’s AFL-CIO is a long way from the Trumka who led the Mine Workers’ audacious occupation of the Pittston Coal plant 20 years ago. You may have seen this common pattern in your local union: the more moderate guy gets the top job and the more militant guy takes second seat. By the time the president retires, it’s too late. In a movement, there should be no reward for patiently waiting your turn.

Related
Global Cleaning Workers Share Their Struggles as the First Line of Pandemic Defense »
Chicago Health Care Workers on Strike for Safe Staffing, $15 Minimum, PPE »
Why and How SEIU Members Are Calling on Our Union to Expel Cops »
Twin Cities Janitors and Guards Feature Climate and Housing in Their Strike Demands »
Eight Thousand Hospital Workers Strike in Seattle »

This is just the beginning. Imagine if card check happened. The bunch of cutthroats that run our unions will be tripping over each other while they are raiding traditional bargaining units.

CTW is pretty much and empty shell. If card check is really on the horizon the unions need to start planning. Everyone needs to get back into the AFLCIO and adhere to the tradition and the rules.

Its not a perfect situation, it never is when you are a labor activist, but it would be the best solution given the circumstances

I have been a member of the Millwrights in Baltimore for almost 40 years, also am one of the founding members of the Millwright local here in Baltimore.Yes, and I agree with most of the posts about Andy Stern ,destroying the rights of union members.But, you have another one and his name is, Douglas A McCarron.Since he has "taken" office, we as union members have lost soo many rights ,it borders on criminal.
We no longer are "allowed"to vote for our "UNION OFFICIALS" meaning, Business Representatives,Organizers or Secretary Treasurers aka C.E.O.'s
These are the true power of any local or District council, they are all "appointed"Another issue I have is I attempted to get a copy of our By-laws and Constitution,was told "You dont need them", evidentally no one at the council ever heard of the "Landrum - Griffith Act of 1959". And trying to get a "motion" made is near impossible.
But, as I said, I have almost 40 years in this local ad less then 500 days to retirement,I am tired of battling the "powers to be" of course, the complacency of the union members doesnt help, which our Illustrious union "leaders" love to see.

I wasn't at the UNITE HERE convention either, but there have been several articles about it (probably the same ones Jane relied on for her editorial) that suggest that even for the crusty old leaders at the top, the beef with Stern is about way more than just jurisdiction poaching. There's real change going on in UNITE HERE and real rank and file anger about the attempted hijacking by Raynor and Stern. Leaders in the shops have seen for themselves how HERE's coordinated strategies have mustered power against employers. Contract standards have been rising in the hospitality industries over the past decade - except in those areas where Stern and Raynor gained temporary traction (food service.) The members get it. It is at least possible that some of the crusty old white guys at the top - or even the second bananas - occasionally get it too.

The smarmy attitude of this article reminds me of the old story of the drunk on bar-stool lecturing everyone in their loudest voice how smarter they are as they continue to waste their time in a dank bar.

Besides being inaccurate and sloppy in many place -- many other unions have criticized the SEIU for the exact reasons you listed and yes it's been pretty obvious for a while that being head of a major international is a more powerful position than being the head of the AFL-CIO -- the holier than thou attitude makes it seem like it's the product of someone with only a passing interest in the existing labor movement. I kept expecting to hear a reference to dinosaurs.

There has been nothing positive to mention coming from the AFL-CIO in the last 20 years? Even the WSJ treats labor as a more active player than you seem to.

If you expect for union members to walk away from this article with anything besides an attitude of "I might as well give up now," you might want to explain how you would do things differently if you were a labor leader.

I'll have to admit, I'm a little confused too. I wasn't at that convention, but am I correct in understanding that all these unions are condemning jurisdiction crossing, and then they themselves are hesitant to come back to the AFL-CIO because they don't want to be held to their own jurisdictions?
Andy Stern isn't a saint, but let's not be bringing in a double standard just because we don't like the way he operates.

Well, the secret deals signed by SEIU and the UNITE side of UNITE Here have been a huge factor in the UNITE HERE fight - Wilhelm has criticized them openly and in multiple venues and interviews. So, for the UNITE HERE folks, at least, It isn't just about turf, or about the millions of dollars Raynor stole from the union, or about SEIU's attempts to sabotage organizing drives, etc, but about a different philosophy of how to organize and fight.

AFSCMEâ€™s Gerald McEntee said, â€œFor another union to come onto your turfâ€¦it breaks the unwritten code.â€

This is awesome, considering AFSME's history and willingness to jump into elections at the last minute and try to raid units that other unions (such as SEIU) has been organizing for years.

I am very sympathetic to HERE's issues with SEIU, but for AFSCME to pretend that they have any moral standing on raiding and turf wars is simply hilarious.