Chrysler's Plan? Send Pay and Standards Down the Drain 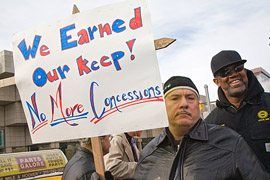 The media consensus is that union auto workers escaped the government-imposed restructuring of their industry basically unharmed, exchanging a few dings for control of the companies. Nothing could be further from the truth.

Now we lose all dental and vision coverage as of July 1, and an independent analyst says the VEBA, our entire health coverage, will last only six years.

We are supposed to be reassured by the fact that the VEBA will own 55 percent of the equity in Chrysler. But what good is owning a company after the value has been taken out? Chrysler’s former owner Daimler has already written its 20 percent stake in Chrysler down to zero on its own books.

The turnaround plan will bring union auto workers much closer to the level of non-union workers. It will widen the two-tier wage structure introduced in the 2007 contract, guaranteeing that auto plants will fill up with second-class, disposable jobs. All workers hired for the next six years will start at $14 an hour and remain there at least until 2015. If that wasn’t bad enough, the rules limiting use of temporary part-time workers are relaxed.

The company will keep pushing out higher-wage workers, and those with less than 20 years’ seniority will receive lesser and lesser amounts of supplemental unemployment pay. It will become harder to refuse reassignment to a distant plant.

The deal will make life on the assembly line worse. Active workers, already working at punishing speeds, will see their relief time cut back. After two hours of work they will get 13 minutes break instead of 16; after another 1.5 hours another 13 minutes rather than 16. Their attendance procedure will be more strict. Their seniority right to bid on individual jobs is canceled, replaced by only the right to change work teams.

The dates of two of their vacation weeks will be dictated by the company. No overtime premiums will be paid until the 41st hour worked in a week—in other words, 12-hour days at straight time will soon prevail, especially for skilled-trades workers.

It gets worse. The deal includes a wage freeze through 2015 and the loss of all supplemental pay such as cost-of-living adjustments, Christmas bonuses, and productivity bonuses. All of these were substitutes for what used to be, in the dim distant past, yearly 3 percent base pay raises.

Chrysler also achieved its long-sought goal of completely collapsing skilled-trades classifications into electrical and mechanical only.

FAREWELL TO THE BALLOT

But the most hateful item in the deal cancels workers’ right to decide on their own contracts until September 2015.

The 2011 contract will be decided by top-level negotiations and then, if necessary, by binding arbitration—where the arbitrator is directed to take into account the labor costs of the non-union transplant car companies in the U.S., such as Toyota.

It is an awesome thing to watch a Democratic president enforce such terms on us, while having unconditionally bailed out undeserving banks with hundreds of billions of dollars.

As Canadian Chrysler workers have said, the active workers must vote with “a cannon to their heads” thanks to the collusion of the government, companies, and banks—and a UAW leadership that leads us ever farther from the militant attitudes of those who built our union under far more difficult circumstances.

Christensen is a retired member of UAW Local 140.

Related
‘You Have to Be Very Persistent’: Lessons from the Starbucks Union in Chile »
Workplace Bullying in Higher Education is Rampant. We’re Fighting Back »
Farm and Construction Equipment Workers Strike in Iowa and Wisconsin »
Amazon Bites Back in Vote at Second New York Warehouse »
Labor Notes Conference 2022: It’s Gonna Be Big »

People believe in free market economics as log as its not their job that's on the line.

This is the effect of lowering everyones standards to the lowest common denominator across the globe today. Those who espoused to these beliefs starting about 30 years ago with Reagan; are now reaping what they have sown. So there was a reason for nationalism; protectionism after all huh? Well now we are fully entrenched in this brave new world. It will be time for us to learn sacrafice at the hands of companies seeking the coal mine wages of the 30's.

In response to what Brother Roehl wrote ... amen and amen.

I'm not sure why anyone should be surprised at Obama. There's nothing in his background to indicate anything but a backroom dealer in love with power.

I bet Gettelfinger and the boys still have dental and vision. not to mention double retirements. And that's equality?

Why cant we organize a national strike. If we are all trully in the same boat together. I want to see the UAW,Teamsters,Machinist,Foodworkers,Aerospace,Teachers,Air traffic controlers,Cops,Firefighters etc. all just stop for 3 days. I think if our nation went hungry and unable to move or fly would this force the hand of our govenment. Tell the President and congress bring America back home. Why cant we do this or something simalar? Demand our proper representation for America. Can we legally do this? If so how do we pull it off. I am ready we have very little left to lose.

If we had a real union, our president would have stood before Congress and said, "We auto workers will neither be ashamed nor apologize for earning a decent wage. We will neither feel guilty nor apologize for having work-rules which ensure that management treats us with the dignity and respect which we deserve as human beings. We do not accept that, because we make more than others, that we are over paid, but assert that, in fact, it is they who are under paid. We will not be the scapegoat for the crises created by others. And we will not bear the burden of fixing their mess. If this government insists that labor costs most be cut, then it had best pass a Single-Payer Health Care plan, so that our companies can compete on more equal footing with companies from other industrialized nations, all of whom supply some form of universal health care. While we agree whole-heartedly that the salvation of our auto industry is vital, we ask why we should care about its salvation if it is achieved through the decimation of our wages, our jobs, our lives?!"

But strong words are only half the equation. Had our companies and government continued down the path which brought us to this point, our leadership would have said, "If you truly believe we are not worth the wage we earn, see what you can do without us." And every worker would have walked, not just out of Chrysler and GM, but out of every UAW represented plant, office, and school. And indeed, every union in the country (every teamster and longshoreman, restaurant and hotel worker, tradesman and teacher) would have stood with us and walked, too. Not a machine would hum, not a wheel would turn. Not a ship would sail, nor airplane fly. No package work move, no work would be done. If only we had a true labor movement in this country.

But, alas, our leadership tells us, that can't be done here. This isn't Europe. It is illegal. They forget that in the 1800s, it was essentially illegal to join a union, yet workers still joined. They forget that until 1932, it was illegal to strike, and yet workers still struck. They forget that in 1936-7, when our founders sat down in their plants, ensuring that no scabs came in and no product went out, this action was illegal. They ignore the fact that everything we have was won through struggle and fight, and that, so long as we refuse to fight, we can expect nothing but concessions.

I hope that one day our leadership will remember these things. I hope that one day the workers of this nation will realize they deserve more than they have and be willing to fight for their fair share. But, until that day, I can only dream of what things would be like if we had a real union.

You are correct if we had a real union. People did make fights and struggles many decades ago. Like then we have to realize WE are the union. If we act as ONE many things in this country can be shut down. People are always waiting for someone else to stand up and speak. Just going to a rally and showing up in monstrous numbers can make changes while others are speaking for us.The regular working joe needs to participate and get involved. Our working conditions and wages do not need to go backward. The people at Republic have been bought and reopened, the UE union still intact and stronger. The CEOS have lived high on the hog for many years. Their greed has caused this. Let them move to less expensive neighborhoods and cars.