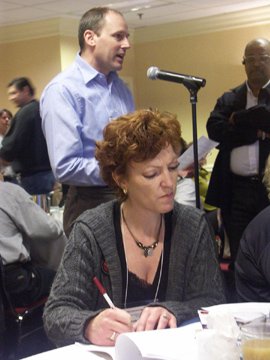 Union members and leaders gathered in St. Louis to set the agenda for a new campaign, Labor for Single-Payer Healthcare. Some vowed to oppose compromise reform plans circulating in Washington. Photo: Jon Flanders.

The meeting launched Labor for Single-Payer Healthcare, a campaign to cut the insurance industry out of health care and expand an improved Medicare system to everyone.

The single-payer concept has been endorsed by 39 state AFL-CIO federations, 100 central labor councils, and more than 400 local unions.

Yet some major unions that have endorsed single payer, including AFSCME and the Service Employees, in practice are backing plans that would preserve private insurers. Both union federations, the AFL-CIO and Change to Win, already have lined up behind compromise plans.

“There’s another agenda out there. It’s not what’s best or what’s right, but what’s opportune,” said Sandy Eaton, a regional president of the Massachusetts Nurses Association.

But their approach is fatally flawed, said Martha Livingston of Physicians for a National Health Program. Because it leaves the profit-making insurance companies as major players, it can’t control spiraling costs and does nothing to prevent insurers from denying care.

The new campaign was launched to make clear to policy-makers that a substantial section of the labor movement sees through the flawed proposals and believes the moment is right to embrace truly universal health care.

In contrast, Democrats are likely to put forward a Massachusetts-style plan, adopting an approach the state initiated in 2006. It mandated that each resident purchase health insurance, yet Eaton said tens of thousands in his state are still uninsured because they can’t afford premiums but don’t qualify for subsidies.

“Single payer is the only reform in health care that has a constituency,” said Rose Ann DeMoro, executive director of the California Nurses Association (CNA). “We have to light the fire that builds the movement to get single payer.”

The 150 delegates discussed how to grow support for single payer in their unions and communities. They’ll be coordinating actions, from plant gate and parking lot rallies to lobby days to more dramatic confrontations at insurance companies.

They believe they will have some breathing room, as Obama will likely not attempt a full overhaul of the system in his first year. They anticipate instead that the administration will focus immediately on smaller changes, such as expanding medical insurance for poor children and reining in excessive costs from private insurers that lure healthy seniors out of Medicare.

Conference-goers said one problem within labor is that unions that run their own welfare funds tend to oppose single payer. These funds, which typically administer health care plans directly to union members, are common in the building trades and Teamsters. Union officers there generally argue that their members are happy with the status quo.

But whether plans are union-run or not, others said, the price of private health care is climbing, eating into salary gains and eroding members’ benefits.

Some attendees foresee even the strongest unions being dragged into health care concessions.

“We don’t want to be the ones going back to members, saying, ‘it’s going to be more expensive this year,’” Dudzic said. “Suddenly we become the agent of retreat for our members.”

Dudzic added that activists need to challenge union leaders to think about what unions could do with the savings that national health care could achieve.

“You could convert a $6 per hour cost into a $2 per hour cost,” Dudzic said, “and do incredible things—subsidized childcare, educational benefits—with the surplus we create as workers.”

Indeed, single payer could pull the U.S. economy out of its quagmire by injecting $317 billion in public and private funds into the economy and creating 2.6 million new jobs, according to the CNA’s research arm.

A study the union previewed at the St. Louis conference said the spending would pump $100 billion in wages into the economy and create almost as many jobs as the economy lost last year.

Many activists raised a big, unanswered question: How to approach union supporters of the mediocre health care reforms competing for attention in Washington?

Essentially, they won’t—for now. Unions and coalitions that support combined private-public plans will go their own way, while activists raise the profile of single payer and pressure Congress members back in their home districts.

“We don’t have the luxury of making long-term plans,” retired Steelworkers Region 7 Director Bill Gibbons reminded delegates, “because the health care reform train is about to leave the station.”

This isn't going to be completely fixed by the end of this year. I would even be happily surprised if it was by the end of 2010. As long as we're heading in the right direction and making progress, I remain optimistic.
---------
OliviaB.

We can't really expect major improvements instantly for this year. The thing is, we have these small movements everywhere in pursuing better health care. This is exactly what Obama asks from us - to support him all the way. We will get there.

A hybrid system allows the insurance companies to continue to interfere with the delivery of healthcare. The insurers are not treating medical professionals. They are profit seeking middlemen. Physicians do not need the hassle and grief that insurance companies cause as they deny the benefits for which we pay big premiums. We should be devoting our time and energy to the patient's well-being. Money that is wasted in administration and unnecessary games-playing (not spent for true healthcare benefits) means lost lives, pain, and suffering. Single payer is the answer! That is why I belong to the PNHP and The IL Single Payer Coalition.

Sweeney is a flip flopper. While a majority of state AFL-CIOs have endorsed HR 676, Sweeney ignores the people who pay dues.